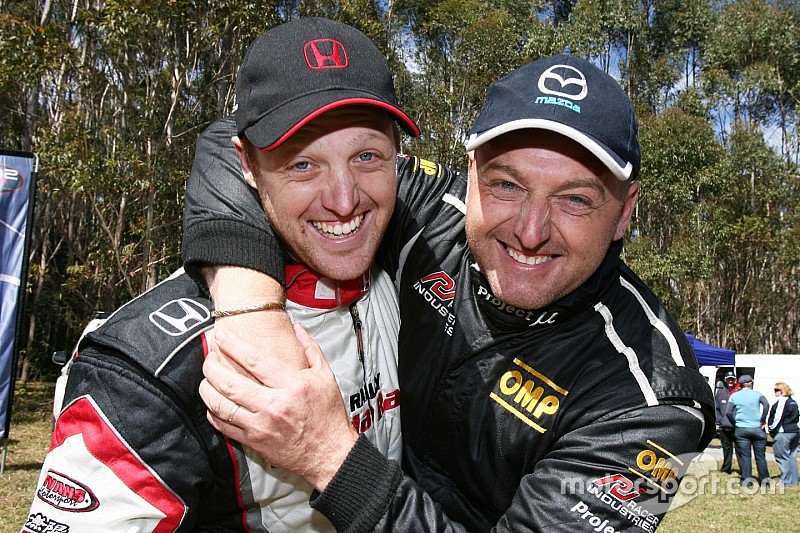 Australian Rally Championship front-runners Simon and Eli Evans have settled their heated dispute from the Capital Rally in Canberra.

The brothers had a run-in – quite literally – in the service park following the second stage in Canberra.

The cause of the argument was a turbo boost problem on Eli’s Citroen, which not only slowed him, but left Simon stuck in a dust cloud behind, unable to pass. Simon later retired with an engine problem, likely caused from his Honda Jazz inducing so much dust while Evans was stuck behind his brother.

“There were times where I was close enough to see him, and a couple of times I tried to get closer in the dust and almost ran off the road because I couldn’t see,” said Simon Evans.

“Twenty kilometres we followed him. Ben was hitting the ‘push to pass’ on the RallySafe but he stayed on the road, didn’t pull over to let us through. I was furious!

“So I ran into him at the finish control. I wanted to get the message across so I pulled up alongside him and smacked my door into him too.”

Eli Evans later explained that he had no idea Simon was stuck behind him, and that he had apologised to his brother several times since the incident.

“Simon was obviously annoyed with me,” said Eli.

“I honestly had no idea he was stuck behind us, and Glen never saw the warning on the RallySafe. I kept thinking about pulling over and waiting for him, but what if he’d had a problem too, I could have been sitting there for minutes and he may have never arrived.”

“He was grateful I went over [to apologise], he’d calmed down by then. We’re brothers, we both love rallying and neither of us wanted anything like this.

“I have no doubt in a week from now we’ll catch up for a beer and laugh about it!

“I sent him a text saying sorry again, I know that probably contributed to his retirement and being stuck behind me snowballed the series of problems that he had that eventually led to a blown engine. He texted back saying ‘still love you mate, it’s alright’.”

“It’s all good, we’re brothers at the end of the day. We’re going to have our differences but we always patch it up in the end.”

Calls for big team support in the ARC