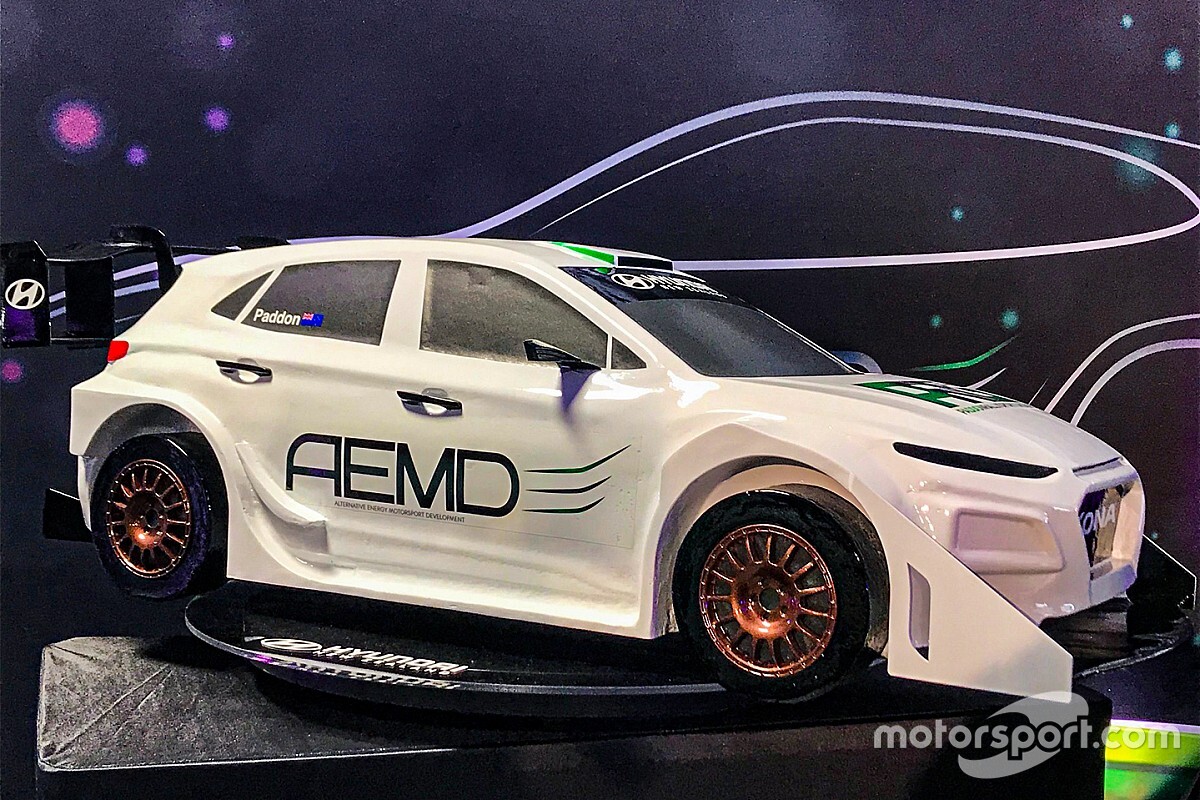 The car is in the design stage now and is expected to be testing for the first time in April, 2020.

The aim of the Kona EV is to be the first rally car capable of completing a full-length event with only electric power.

Paddon is working with Hyundai New Zealand, the University of Canterbury and the Stohl Advanced Research and Development – Manfred Stohl’s team, which is already providing an electric solution for rallycross.

Breaking new ground in rallying is nothing new for Paddon Rallysport, the Kiwi outfit was the first to win Hyundai a manufacturers’ title anywhere in the world with its i20 AP4 car in the New Zealand Rally Championship.

“The car’s going to be a showstopper in terms of performance,” said Paddon at the launch of Paddon Rallysport’s Alternative Energy Motorsport Division at its home in Central Otago, New Zealand.

Paddon continued: “Alternative energy powerplants are evolving very quickkly in the consumer-focused car sector, but the same developments are not as widespread in motorsport and certainly not in rallying.

“Not unlike most motorsport enthusiasts and their first impressions of the concept, I thought: “Not EV!” But the more I thought about it, the more potential I could see to align top-tier rallying with the technology aims of major vehicle manufacturers.”

The World Rally Championship introduces hybrid to the series in 2022, by which time Paddon plans to be on the second stage of an electric solution.

Paddon said: “From some of the EV technology that already exists, performance is already there – some cars have up to 1000bhp. It’s how you harness that performance for rallying, for example with torque vectoring for gravel or low-grip situations and the range needed to complete a full day’s rallying.

“[EV] Rallying opens up more challenges compared to circuit racing in terms of range, charging systems and sound. When we find solutions for these elements, many will be applicable to the general road user and EV car owner.”

One of the key challenges in rallying will be ensuring the car makes enough noise to warn spectators and rally officials of its arrival.
“I’m committed to making sure our car creates the kind of noise a rally fan enjoys,” said Paddon. “From an entirely practical point of view, a rally car needs to create a loud and distinctive sound for the safety of everybody enjoying the action.”

The plan is to run the Kona EV rally car on domestic New Zealand events next season, with a second prototype – complete with extended range – in the pipeline for 2021.

Hyundai New Zealand general manager Andy Sinclair said his firm is delighted to be working with Paddon on the latest venture: “We are excited to be involved in the development of the world’s first electric rally car with Paddon Rallysport.

“As the number one new EV brand in New Zealand we are committed to being at the forefront of innovation and championing the EV industry here, so this project aligns with us leading the way.”

Paddon recently announced a long-term deal with New Zealand electricity supply firm YES Power – an agreement which will serve the new project and his hopes of a return to the WRC.

Paddon was due to return to the world championship at Rally Finland earlier this month, but that M-Sport outing was curtailed when Paddon crashed the Ford Fiesta WRC at the pre-event test.

Talking of the potential for a WRC return, Paddon told Autosport: “The chances are good. We’re working with M-Sport right now and that’s a real focus for me. I’ve got to be honest, I’ve had a few bumps in the road and what happened in Finland was just another one.

“I brushed it off and I’m now working on the new plan to get back there.”

Scott Speed breaks his back in rallycross landing