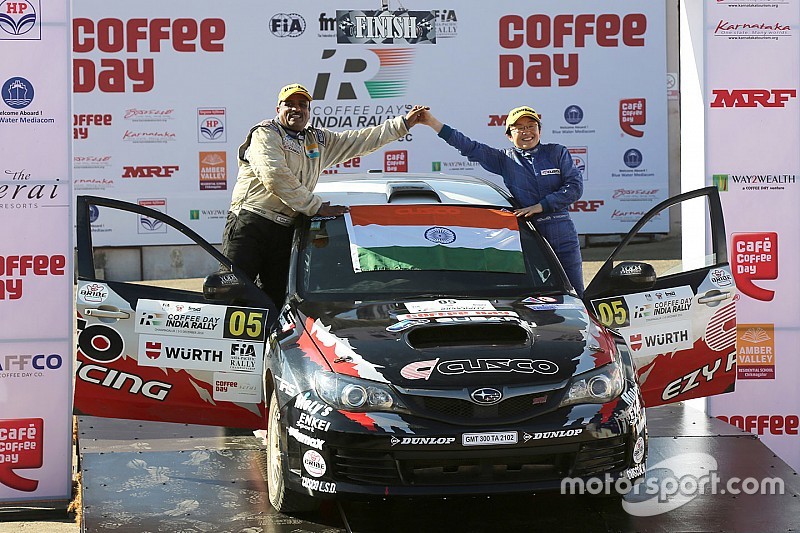 Sanjay Takale was ecstatic to cap-off the 2016 Asia-Pacific Rally Championship season by securing a podium finish at the final round in India.

Driving a Subaru Impreza for Cusco Racing, Takale finished third in the Rally of India, 24m13.1s behind winner Gaurav Gill - making it two Indians on the podium.

It was also Takale’s first rostrum finish since his return to APRC this year - and it aptly came at his home ground in Chikmagalur, rounding off the season in fourth with 51 points.

The veteran rallyist also took victory in the Indian Rally Championship (IRC), which ran concurrently with the intercontinental series - terming it to be a 'childhood dream' achieved.

“It’s fantastic to finish on the podium in India. I can’t ask for anything more,’’ Takale told Motorsport.com after the rally.

“It was nice to see two Indians on the podium in APRC in home country. We are first two to do so in APRC.”

“[Also] one thing I wanted as a kid was to finish first in IRC. And here I was able to do so. So good job and good timing.”

Takale, who has been rallying for several years around the globe, was also pleased to see India return to the APRC calendar after over a decade.

“It’s nice to have it back in India. There are very strong boys, lots of good competitors in APRC. All over the world the motorsport is going on a big [rise]. So why should India be behind?

Asked whether India has a long-term future on the APRC map, Takale replied: “I think so. They always wanted to come to India.”

“They were trying to sort out some things and issues. They were worried about the safety part and all. But everything is okay now. And they are happy to be here,’’ he added.

"They have been quite brave and drive very well, [more importantly] they risk their lives. So compared to other sports, it's more risky. So it needs more recognition [certainly]," he added.

When asked on his future as 2016 comes to an end, Takale revealed that he would be taking part in several European rallies next year, before returning to Asia for the latter part of the season.

“I’m looking to Europe for 2017. This year I've learnt so much. I’ve improved my style [of driving]. So there’s definitely some rallies I will be doing [in Europe],’’ he said.

“I would like to come back to APRC later in the year. This is my home championship. For the first part of the year I will try to spend some time in Europe and learn to drive an R5 car.

"I [also] need some time for myself to work and build by fitness. And get more organised.“

Kreim and Young content with APRC season despite defeat to Gill