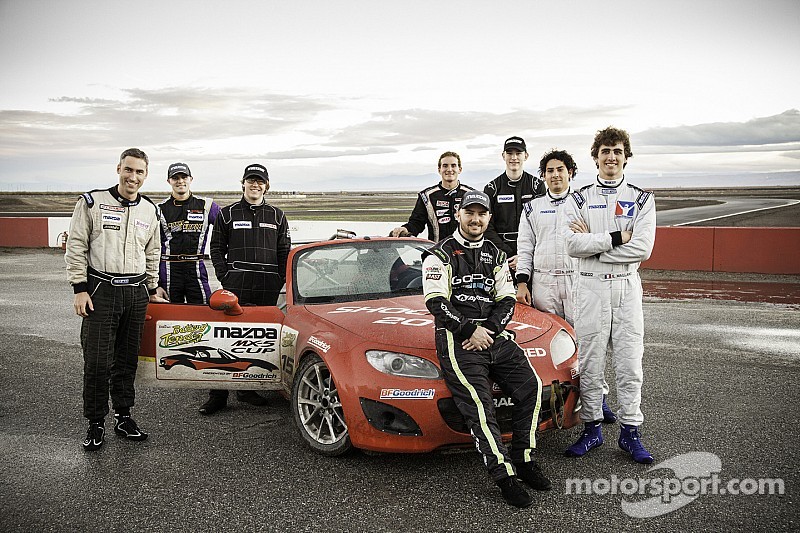 Kyle Loustaunau was declared the winner at the event's conclusion.

Mazda Motorsports walks the walk and talks the talk. With programs that benefit racers in every aspect of the sport, Mazda works to bring talent to the attention of sponsors and fans throughout the United States and abroad.

For the eighth consecutive year, Mazda held its Mazda Club Racer Shootout at Buttonwillow Raceway Park about 140 miles north of Los Angeles. After winnowing the field from 22 semifinalists to an enlarged group of eight - the biggest group before 2014 had included five drivers - contestants gathered in Bakersfield initially for interviews with the six judges who would determine their fate.

The Mazda Club Racer Shootout promotes a single racer to the professional ranks by awarding a $75,000 prize to help fund that driver to the 2015 Battery Tender Mazda MX-5 Cup presented by BF Goodrich Tires.

On the first day of this two-day exercise, each contestant presented a business proposal, which was evaluated and ranked by the judging panel and had been essential to narrowing the field from the semifinalists to finalists. One by one the candidates entered a hotel meeting room, with each finalist speaking with the judging panel as they showed their communications skills, their marketing plans for the potential scholarship and off-track business and public relations capabilities.

The second day was reserved for track time at Buttonwillow, which has two loops - East and West - to evaluate driver skills behind the wheel of a race-prepped Mazda MX-5. The weather didn’t cooperate as drought-plagued Southern California experienced its first substantial rainfall in a year on this particular day. In its seven previous iterations, Mazda used the East Loop for its scholarship face-off; this year it used the West Loop, a slightly longer track.

The nasty weather didn’t seem to phase the eight contestants overmuch. A diverse group, they numbered five NASA champions, one Skip Barber Racing School champion and, for the first time, two iRacing MX-5 Cup online driving champions. This is the first time Mazda has included digital drivers and it’s also the first time there have been contestants from outside North America: one driver hails from France and another from Hawaii.

As one would expect with the significant rainfall that began in early morning, the eight finalists did have some “offs” on the West Loop of Buttonwillow’s very technical circuit, but these were simple errors to remedy with a careful checkover by the Mazda team and a few hanged heads in the paddock.

Following the early morning group photo opportunity, each driver had a couple of familiarization sessions to get to know the MX-5 Cup racecar which, in most every instance has greater power than any of them had experienced in their physical or digital racing careers. Following lunch the timed lapping sessions began. Mazda customarily brings a single MX-5 Cup racecar to the Challenge together with a spare; this year both the racecar and the spare car were pressed into service due to the large number of contestants, allowing two drivers on-circuit simultaneously (yet spread apart).

At the close of the dank and wet day, the six judges met for more than two hours to discuss the candidates and proclaim a winner. And then they made the eight candidates wait another two days - from Tuesday until Thursday - to find out who prevailed on a live-stream and teleconference call. As the finalists waited on their fate, Mazda Motorsports’ Steve Sanders, Dean Case and David Cook all addressed the finalists.

“This is one of the coolest events Mazda does,” Case stressed. “Pro racing gets the television and the glamour but Mazda’s heart and soul exists to aid young driver and to show how good club racing really is.” Sanders thanked the judges for their participation and their feedback: “These were unusual conditions compared to the past and we got through it very well. I appreciate everyone’s patience,” he said. Cook called it a “very difficult process as the judges deliberated quite a while.” He focused more on the business side of the equation (despite a stellar driving career of his own) and appreciated the proposals to activate “A 12-month plan to achieve racing goals: find money and find partners. It’s been very exciting to work with these people.”

Racer Charles Espenlaub, one of the six judges noted, “The conditions were very challenging for all involved and everyone from Mazda did a great job of keeping it all moving along. The level of competition here has gotten better every year,” he noted, “and the deliberations got pretty tough getting down to the final three (from eight). We had to look at the total package and it wasn’t easy by any means.”

While Espenlaub stated all candidates had “earned a seat at the table and were ready to go,” the ultimate prize went to Kyle Loustaunau, the 26-year-old from Vacaville in Northern California who works “multiple jobs and attends college classes in order to make a living and support my racing passion.” Loustaunau works as a CNC machinist and as a waiter/bartender, attending community college classes at night to pursue a future career in biotechnology.

This season Loustaunau’s goal was to win the NASA Western States championship race, competing against the best drivers and their Spec Miata cars on the technical Sonoma Raceway road course. As he knew his 1.6L engine didn’t have the torque to make a dent in the competition, he rented a more powerful car and made a final pass to accomplish his goal and win the race. No doubt that tenacity helped gain Loustaunau his place in the finals of this shootout and helped convince the judges he was the guy.

“I’m speechless,” the flustered winner said. “This is the greatest time in my life and I can’t wait to get started. The driving aspect of this program was the most natural and the business proposal [presentation] was absolutely terrifying. The conditions were so difficult; this is the first time I’ve ever driven a racecar in the rain and it was definitely challenging,” he finally blurted.

With the caliber of contestants for this eighth edition of Mazda Motorsports’ Club Racer Shootout was an overwhelming success - despite the poor weather. No doubt the ninth edition will be spectacular as well.