The Isle of Man TT returned in 2022 for the first time since the COVID-19 pandemic began. While there were many plot points to follow, the question as to whether it would be the last outing for a TT legend was intriguing...

It’s the question that has dominated the build-up to the 2022 Isle of Man TT: will this year be John McGuinness’ swansong?

Never likely to grace the cover of Vogue or be a guest of honour at Los Angeles celeb-fests, McGuinness will never have the profile of some of Britain’s other top sporting icons. But those who know, know that the bricky from Morecambe is a genuine sporting legend.

Making his Isle of Man TT debut in 1996, some two months before this writer was even born, McGuinness tasted victory for the first time in 1999. From that moment on, he would change the game in motorcycle road racing very much in the same way his great hero – and team-mate at one time – Joey Dunlop, the TT’s most successful rider with 26 wins, did from the 1970s through to his death in 2000.

McGuinness won 22 more times following that Lightweight 250cc TT win in 1999, 12 of which came in the Superbike class. McGuinness has won on Superbikes, Supersport bikes, two-stroke, four-stroke, electric bikes and set the first ever 130mph lap at the TT in 2007 – achievements made by a man who has never shied away from the fact that, for a lot of it, he wasn’t exactly the model of an ultra-athlete.

It’s this no-ego humility that has won McGuinness a legion of fans and made him motorcycle road racing’s most prolific rider, a man with some big-name supporters in his corner – not least a certain nine-time grand prix motorcycle world champion Valentino Rossi.

But since 2017 time has not been kind to McGuinness. A massive accident at the North West 200 when the throttle on his then-new Honda Fireblade Superbike stuck open left him with a badly broken leg. That ruled him out of TT 2017 and 2018, while his return in 2019 was disastrous. 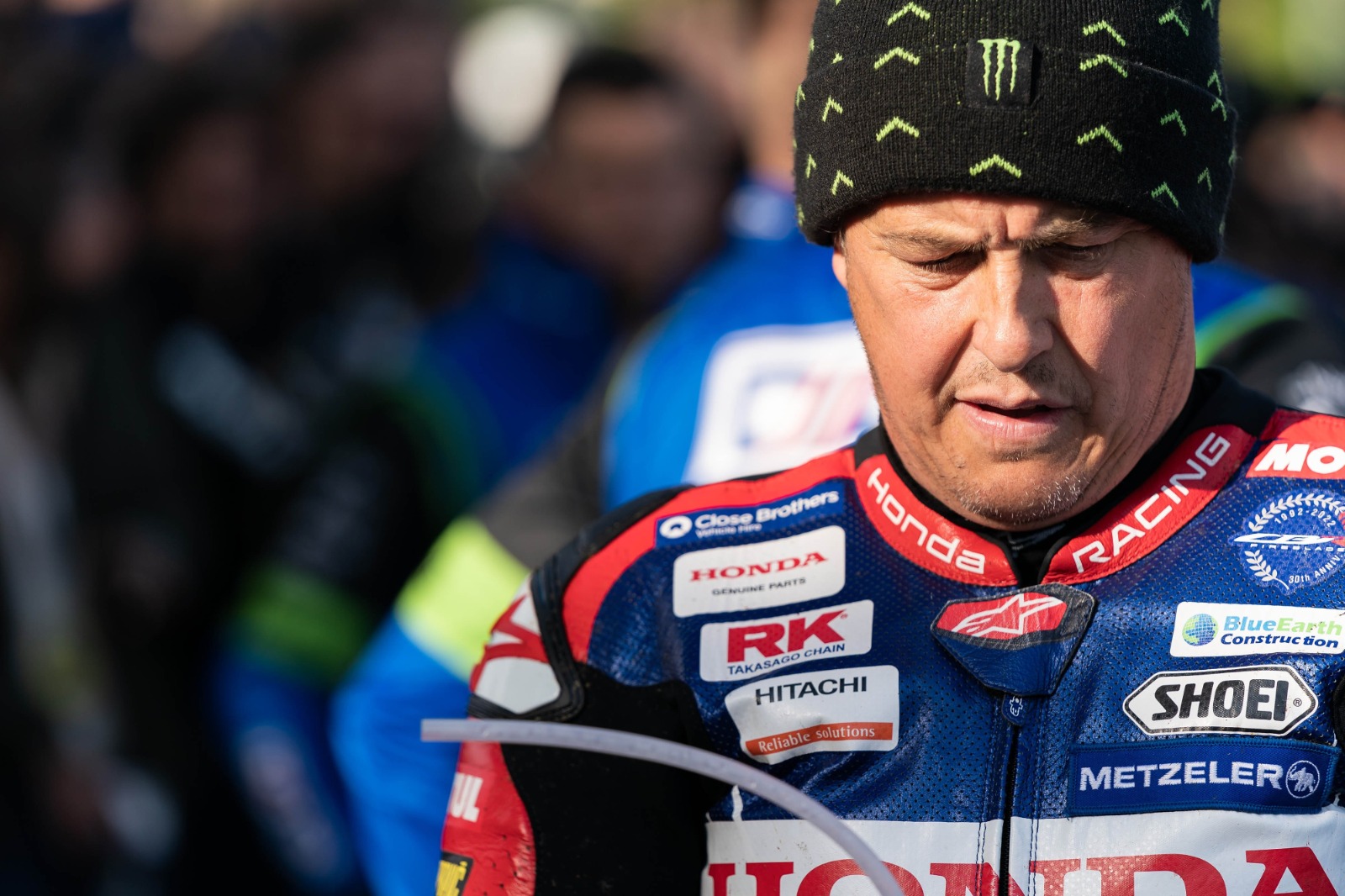 Partnering with Stuart Garner – a man, who this year pleaded guilty to corruption offences, proved to be as awful as one of his motorcycles – and Norton for his big comeback in 2019, he failed to finish either of the Superbike contests as the bike was massively unreliable and results in the other classes, aside from a podium in the Zero TT, were less than special.

Speaking to Motorsport.com directly after a dismal end to his 2019 TT, McGuinness confirmed he was not done yet and was wanting to formulate plans to get himself back on his A game for TT 2020. And then COVID happened…

The two-year gap robbed McGuinness of time in a career that is now in its twilight, but crucially, the events of 2019 hadn’t broken him.

“It was never a loss of love for the TT,” McGuinness, who admits he “hated every minute” of riding the Norton in TT 2019, said ahead of a Senior race that was ultimately postponed from Friday to Saturday.

“It was just the doubting yourself, [the thought that] you’ve forgotten how to do it, you can’t ride anymore. I had a rough time, really. But it’s weird, I went to Macau at the end of the year [in 2019] and rode [Paul] Bird’s Ducati, I did OK, I qualified well and I realised that I hadn’t forgotten how to do it. I hadn’t come out of the hamster wheel, as I call it.

"I kept doing the BSB, two years of Ducati Cup while in the meantime I was negotiating with Honda. So yeah, all that was in the back of my mind was doing more TTs. If I had just sat on my arse for two years [during COVID] and come back I’d have had no chance. But I kept going, kept riding, kept the love for the job and ran my own Ducati thing.”

McGuinness has some podium form in the Ducati Cup on the British Superbike support package, and for 2022 secured himself a return to Honda (having originally signed for Bournemouth Kawasaki in 2020 after parting ways with Norton as Garner’s corruption started to hit the headlines). It was an unlikely return ‘home’ given how acrimoniously things ended between himself and Honda after his 2017 accident. 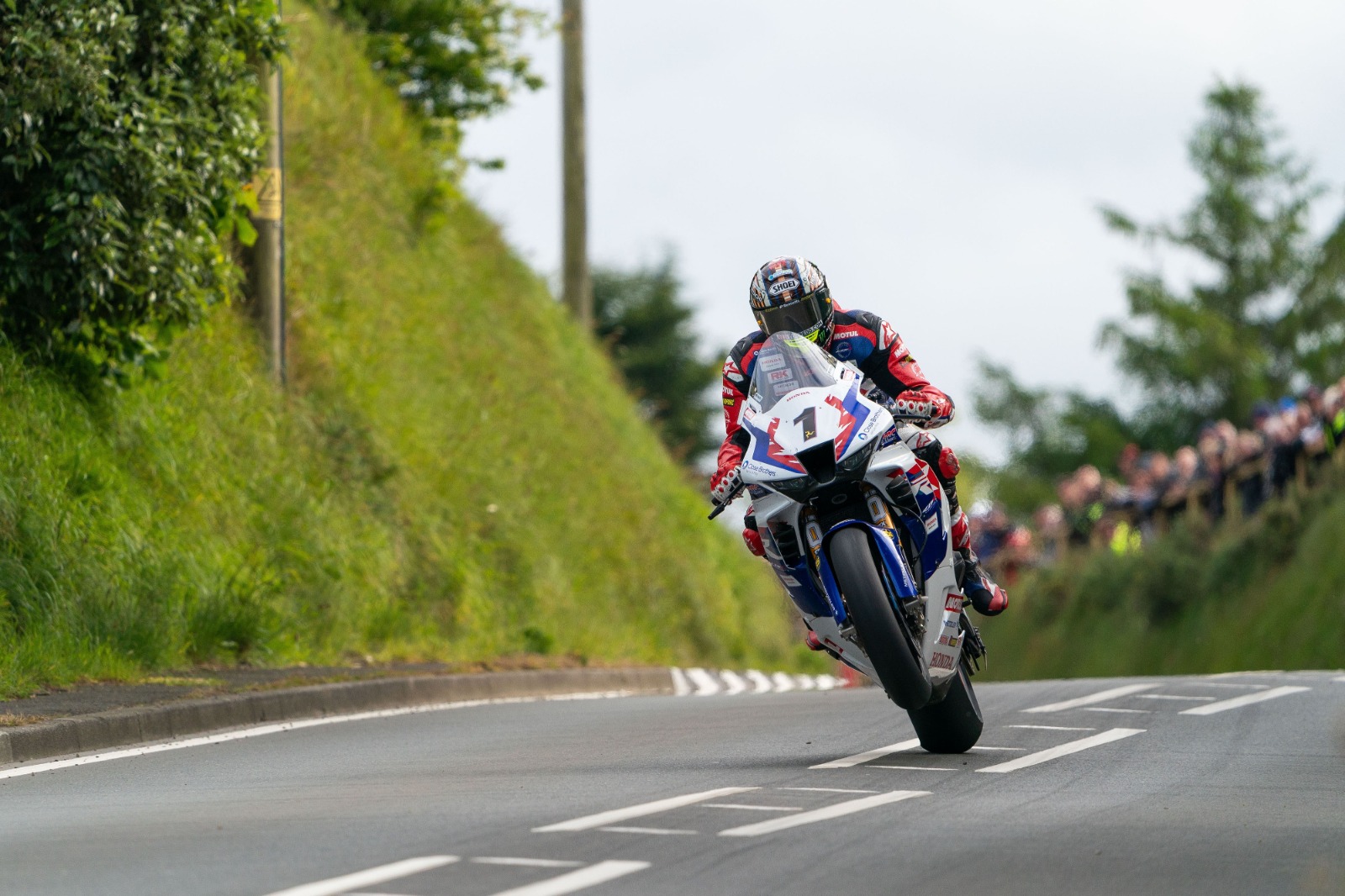 But it was almost as if his Honda return was a moment of planetary alignment. This year is the 30th anniversary of the Fireblade, the new CBR1000RR-R much more competitive a package than the bike he last rode in 2017; the opening Superbike race of TT 2022 would mark McGuinness’ 100th start and he’d just turned 50. This thought of the perfect storm was only heightened by his own revelation to the media earlier in the year after receiving his MBE that TT 2022 could well be his last.

When Motorsport.com sits down with McGuinness in the back of the Honda truck, he is a man that looks conflicted within. Perhaps this was because our chat took place an hour before the Senior TT finale was due to take place, or perhaps because he was dreading facing a question he’s been asked a thousand times already.

But more than anything, McGuinness looks like a conflicted man because his mind doesn’t appear to be made up.

“Yeah, of course I can,” he responds without hesitation when asked if he could walk away a happy man should TT 2022 ultimately be his last. “Absolutely. How can I not be? 20-odd years racing here, fantastic results, fantastic people, the joy of doing it, success, a few quid. Yeah, absolutely, there’s nothing I can look back on and think I could have done different or any worse. I can hold my head up high. Not that it’s going to be my last one, but it would be nice to just cross the line.”

Pressed on whether “not that this is going to be my last one” meant he is already eyeing a TT future, his answer further suggests this is a rider who thinks there are still possibilities to be competitive.

“I want to race until I’m 100 years old, but I can’t,” he says. “I have to stop at some stage. Time stops for no man. It's getting a little bit tougher and tougher. You’ve just got to accept that if you’re eighth, you’re eighth. If you ride around and you’re eighth and can accept you’re eighth, that’s fine.

“You get used to winning and standing on the podium, and when you’re not, you’re like ‘why am I not?’. But I need to work that out why I’m not, if I want to carry on. I’m not going to dwell on it too much. I’m just going to ride my motorbike, enjoy it, and then get round the table with the family and everyone else, sponsors and just enjoy it, embrace what we’ve done, what we’ve had. And then if I want to have a rip round again, I’m sure Honda will provide something.” 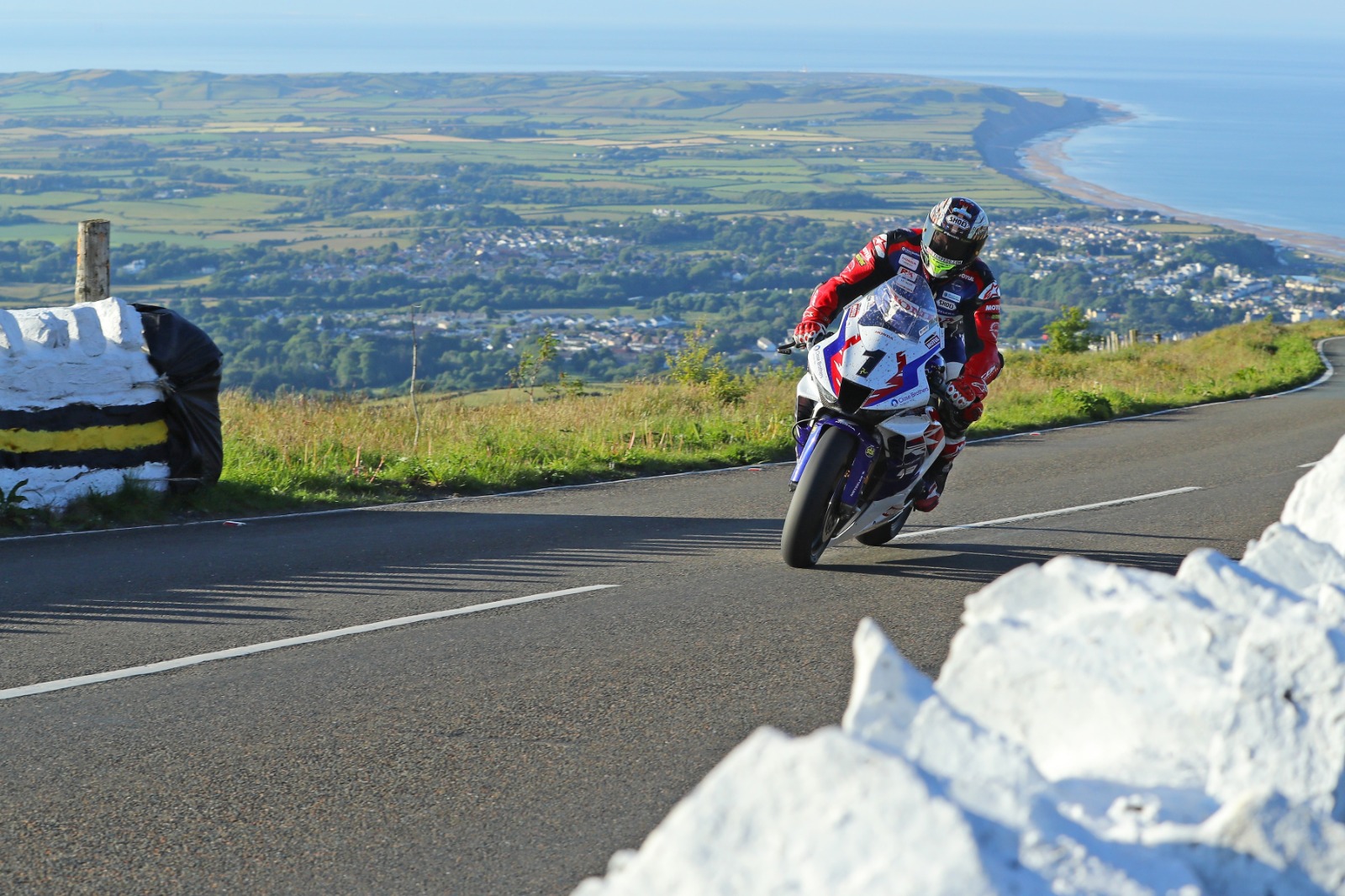 McGuinness tackled the iconic Mountain Course once more in 2022, having made his debut in 1996

There are, of course, many considerations to take into account when it comes to someone with the stature of McGuinness deciding to hang up his leathers. And because of that, he’s not likely to drop that bombshell to a journalist he’s only spoken to three times since 2019.

Starting number one on the road on a Fireblade decked out in a special 100th start livery, McGuinness was not a factor in the podium battle. But he was comfortably running in top six contention in last Saturday’s opening Superbike race and took the chequered flag in a fine fifth after capitalising on some mechanical issues for riders ahead of him on corrected time.

In the Senior TT, he managed to get back into the top 10 after being hit with a 30-second time penalty for pitlane speeding, catching and re-passing Michael Dunlop – who won twice at TT 2022 – on the road and pulling away from him in the latter stages of the race.

"You’ve got to be here for the right reasons, even your team" John McGuinness

His Superbike TT result proved that the rekindled McGuinness/Honda partnership is firing on all cylinders and has potential for further strong results.

“It’s nice knowing that stuff’s getting done without you having to be looking over somebody’s shoulder,” he said when asked about his new relationship with Honda, with whom he won all of his Superbike races at the TT.

“My mechanics are at the top of their game, my crew chief has won world titles with riders and the guys on the spanners want to be here, they’re enjoying it. You’ve got to be here for the right reasons, even your team. Sometimes there’s a lot going on behind closed doors that you don’t see. But unless you’re all on the same page, you’re not going to get anywhere. But it’s good.”

Taking a step back and analysing his comments earlier in the year about TT 2022 potentially being his last, they appear to have been made with a caveat: "TT 2022 could be my last, if…" 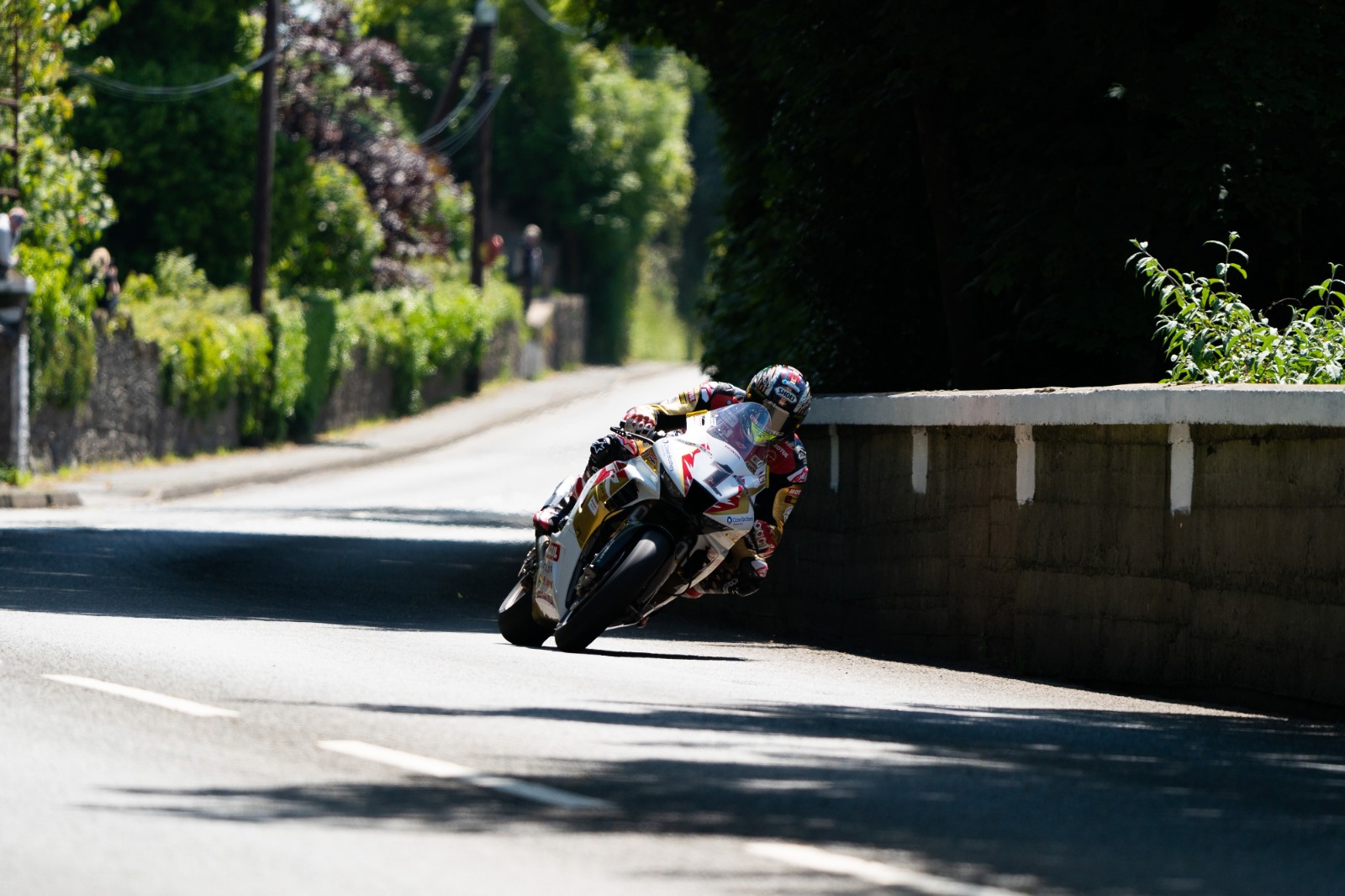 The big if, then, is whether the lingering doubt that he had following his 2019 TT disaster could be shaken. Macau results are one thing, but it had truly gone last Saturday during his 100th TT start.

“Yeah, it did,” he responded when asked if his doubts were ousted during the Superbike race. “Through practice, I was back in the swing of it, and like I say I’m not quite the fastest and that’s a bit my fault really, things could be tidied up a little bit from everybody’s point of view. But at the end of the day, everybody just needed to get back here and get one under our belt and get the confidence back for Honda and the new Blade, 30th anniversary, there’s just been loads of boxes ticked left, right and centre that have been really cool.”

It will be some time before we know if TT 2022 was in fact John McGuinness’ last. And that’s OK. He has earned the right to call time on his own terms, whether that be with one final outing in 2023 or with a pint in hand surrounded by his family out of the spotlight.

But should 2022 have been his last, McGuinness goes out on a high having shown on his historic 100th start that he was not here just to milk the limelight and simply make up the numbers… 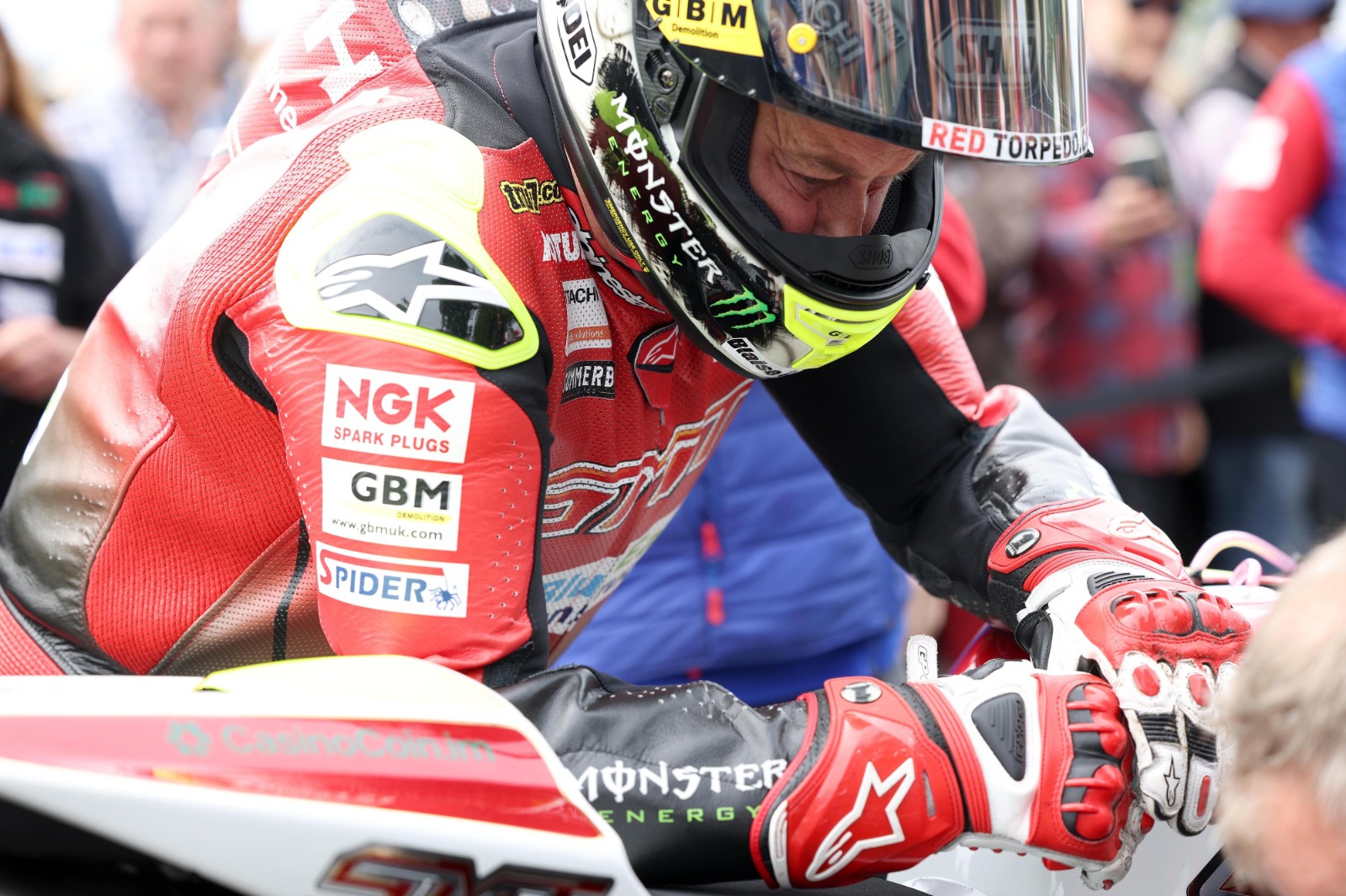 Should 2022 have been McGuinness' last TT, the legend would have gone out on a high