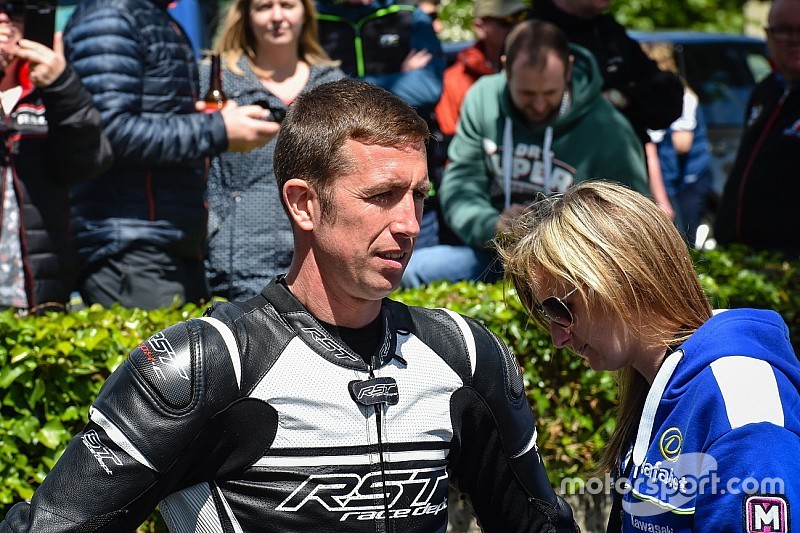 Isle of Man TT rider Steve Mercer's condition has been described as “stable” as he continues his recovery from injuries sustained in a collision with a course car on Wednesday evening.

Following the tragic accident that claimed the life of Manx rider Dan Kneen during Wednesday evening's practice sessions, Jackson Racing's Mercer collided with a course car on its way to the scene of the Chruchtown incident while he made his way back to the paddock.

Mercer was taken to Nobles hospital on the island before being transferred to a hospital in Liverpool, where he underwent surgery on his leg and pelvis.

His wife Caroline revealed in a statement on Thursday that Mercer has suffered a broken heel, T12 vertebrae, a fracture to his larynx, as well as neck damage, and was unable to breath unaided.

In a second update on Saturday, she added: “Steve is still in critical care and will be for a while yet. He's still unable to fully breath for himself, however they [the doctors] are hopeful he may be able to try soon.”

On Sunday a brief statement from TT organisers the ACU said Mercer is now “stable in hospital in Liverpool and is receiving ongoing assessment.”

Mercer had announced his retirement from racing following a crash at the TT last year, but was back in action in 2018 testing with the official Honda team in the event Ian Hutchinson was unable to compete through injury.

After the 16-time winner was declared fit enough to join the Honda squad, Mercer found a place with the Jackson Racing team for this year's event.

Saturday's opening Superbike TT was emotionally won by Tyco BMW's Michael Dunlop, who dedicated his 16th win on the island to his fallen teammate Kneen.

Event organisers also reported that Sidecar driver Tony Baker, who had an accident at Sky Hill in yesterday's red flagged Sidecar TT race, has a leg fracture and is described as "comfortable". Tony's passenger, Fiona Baker-Holden, is comfortable with soft tissue injuries.