Conor Cummins topped the first Superbike Isle of Man TT practice in five days, as the poor weather which has plagued the the schedule finally relented. 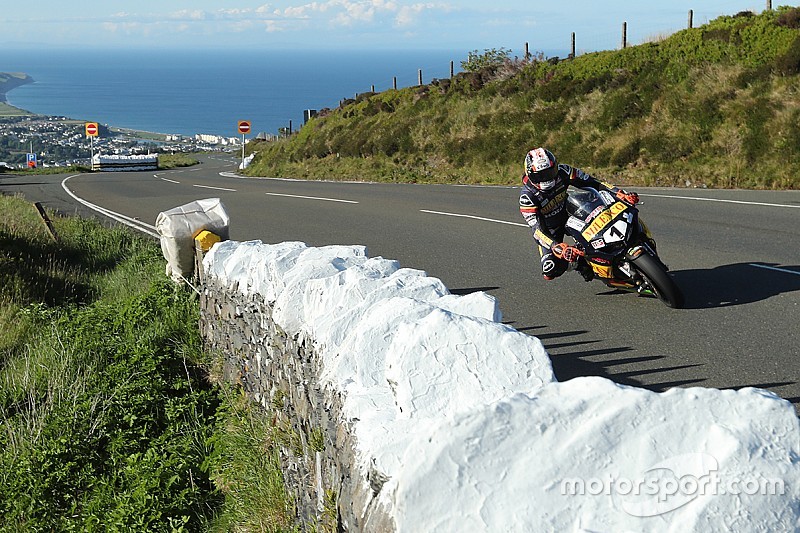 Four straight days of practice had been lost to the poor weather, which forced the opening race day to be postponed until Monday. Action was due to begin at 1:30pm local time, but was delayed by 90 minutes while mist over the mountain cleared. This forced the planned Lightweight class running to be scrapped.

The Sidecars were first away at 2:55pm for a two-lap session, with Tuesday pacesetters John Holden and Lee Cain setting the pace on their Barnes Racing outfit with a tour of 19m41.293s at 114.99mph. Reigning Sidecar TT champions Ben and Tom Birchall guided their machine to second with a lap of 114.93mph, while Peter Founds and passenger Jevon Walmsley (Rowtec Engineering) completed the top three.

The combined SBK, Superstock, Supersport, Newcomers sessions followed the Sidecars, with most of the frontrunners heading out on their SBK machines. Padgetts Honda's Cummins set the pace in the class with a lap of 17m37.039s at 128.92mph, with Tuesday SBK leader Dean Harrison 5.1s adrift on his Silicone Engineering Kawasaki.

Peter Hickman started on his SBK-spec Smiths Racing BMW having been unable to complete a lap on it due to a technical issue on Tuesday, and went sixth fastest at the end of his opening tour before switching to his STK bike. He went top in class with a 17m37.039s at 128.50mph, and was due to go fastest overall on his second effort, but lost time over the mountain section.

Cummins’ time went unchallenged in the end, with Harrison holding onto second ahead of Michael Rutter on the Bathams Honda RC213V-S, Devitt Racing's Jamie Coward and Bournemouth Kawasaki's James Hillier. Hickman was sixth, and remained top in STK, while John McGuinness was ninth on the Norton. After crashing on Tuesday, Ian Hutchinson completed three laps on his SBK in 19th.

Michael Dunlop suffered a technical issue at the Mountain Box on his Tyco BMW SBK on his first lap, and was unable to finish the session.

Lee Johnston led the SSP classification on his Ashcourt Racing Yamaha, beating long-time class leader Gary Johnson (Lee Hardy Racing) late on with a 18m24.957s at 122.93mph. Johnson ended up three seconds down in second, with Hillier a further 5.1s in third on his ZX-6R Kawasaki.

Harrison ended the session on his SSP machine, and was fifth between Prez Racing's Jamie Coward and Hutchinson, while McGuinness was 12th quickest on the Padgetts Honda.