Available to watch on Motorsport.tv from the Duke Classic archive, relive the incredible 1992 Isle of Man TT when Steve Hislop and Carl Fogarty created history.

Hislop and Fogarty’s 1992 Senior TT duel in the Manx sun arguably remains the finest TT race in history. Over a record 1hr and 52 minutes of racing, ‘Hizzy’ and ‘Foggy’ couldn’t be separated by more than 8 seconds.

With humble machinery, both men eclipsed their previous blistering pace riding Hondas in 1991. Like any great encounter, the tale of the 1992 Senior TT is intertwined with intriguing sub plots.

Although impossible to separate on the stopwatch, Steve Hislop and Carl Fogarty were contrasting characters. Fogarty, a four-time World Superbike champion, remains unashamedly vocal about his ability. Arguably the fiercest competitor ever seen in motorcycle racing, Fogarty made no friends on his way to the top. However, his respect for Hislop was absolute. Fogarty believed Hislop to be one of the finest to race the Isle of Man TT.

Steve Hislop was softly spoken, understated, yet devastatingly quick. Curiously, Hislop possessed the same assurance of his ability as Fogarty. Although close study of the Hawick native would be necessary to pick up the clues. Hislop did his talking on the bike with graceful style.

A year before their 1992 encounter, Hislop and Fogarty locked horns as Honda teammates at the TT. Riding the exotic RVF, both operated in their own galaxy to the rest. With match point set for a 10th consecutive F1 TT win, Honda left nothing to chance. Honda Racing Corporation chief, Mr Oguma, attended to ensure successful completion of Honda’s mission. 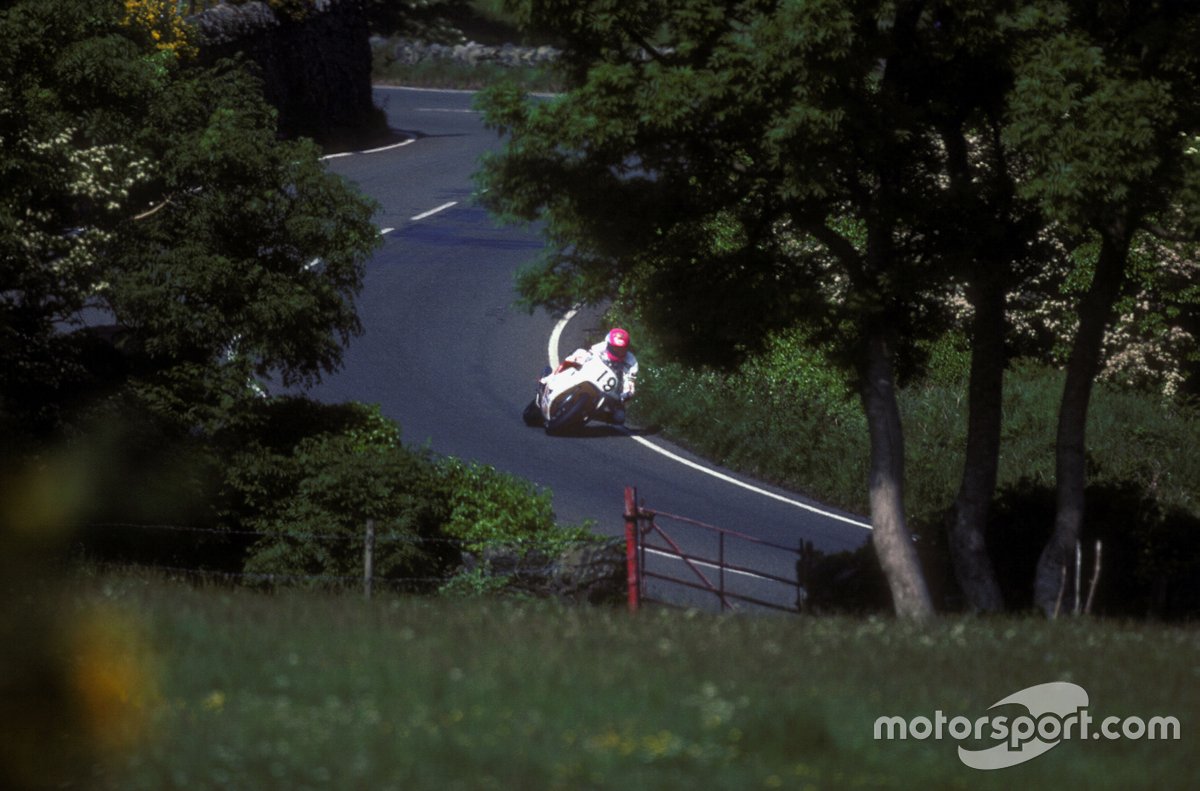 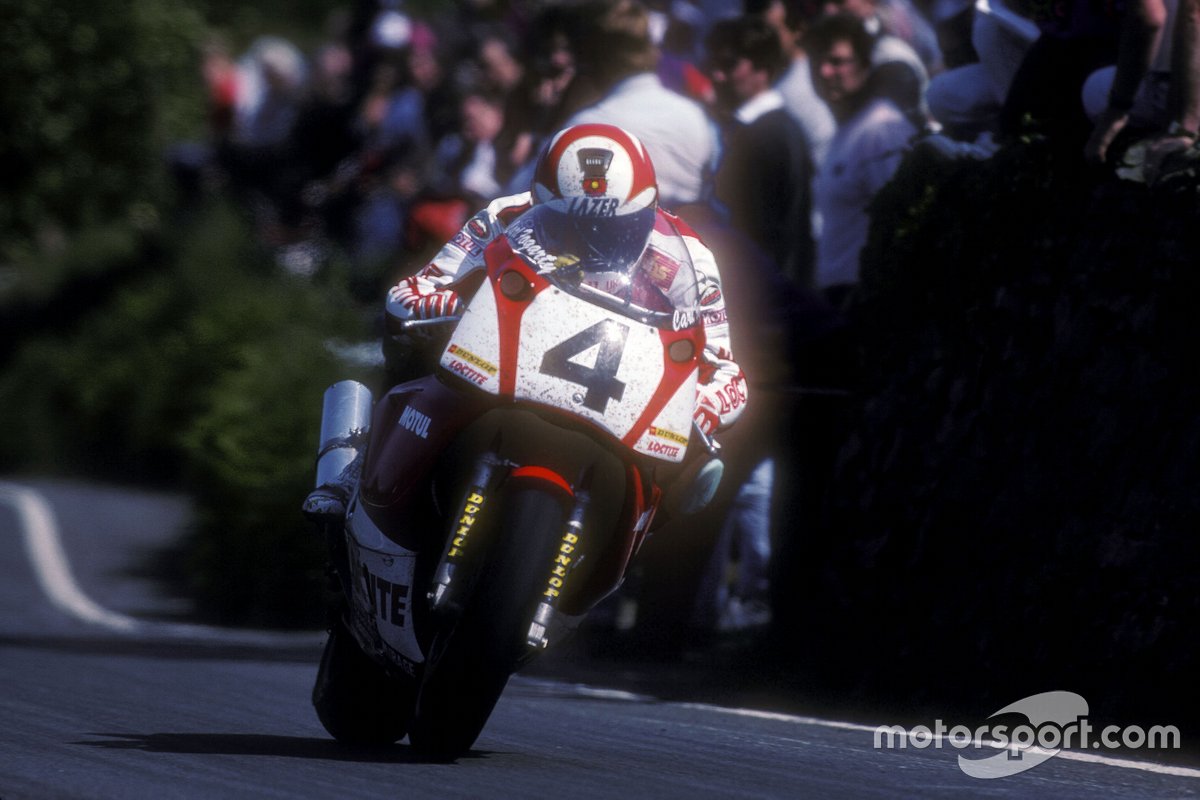 Revelling in their new machines, Hislop and Fogarty traded blows during practice. Taking turns to notch up the pace. Although just another day at the office for ‘Hizzy’ and ‘Foggy’, Mr Oguma was furious. Both riders were summoned to a schoolboy telling off and reminded the other teams were the enemy, not each other.

Hislop defeated Fogarty in the 1991 F1 TT, demolishing the lap record in the process. In 1992, the circumstances for Hislop and Fogarty leading up to the TT were much different.

Fogarty toiled to fund a privateer effort in the World Superbike Championship in 1992. This effort eventually spring boarded the Englishman to four world titles (1994, '95, '98, '99). However, Fogarty’s 1992 TT campaign played a key role in this legacy.

Having left the TT behind to focus on ‘short circuit’ racing, Fogarty expected never to make a competitive return to the island. A call from Yamaha changed that. With £7000 from Yamaha and £7000 from the Isle of Man tourist board and an expensive WSB campaign to pay for, Fogarty agreed to return once more.

As would unfortunately remain customary for Hislop, his route to the 1992 TT involves a trail of broken promises and fall outs.

Honda team boss, Neil Tuxworth assured Hislop of a Honda RC30 ride in the British Championship and the TT for 1992. For a winner of seven TTs and a British 250cc championship aboard Hondas, this would’ve appeared a formality. Yet, Hislop was dumped, making way for Simon Crafar. Having taken Tuxworth on his word, Hislop was left in the cold with no ride and precious little time to secure one.

‘The Flying Haggis’ then signed for Yamaha. Keen to profit from Honda’s snub, Yamaha were eager to sign a multiple TT winner. A £10,000 retainer to race at the TT was offered but Hislop yearned for racing beyond the TT. In the end, a package was agreed including the British Championship under the Tillston’s Yamaha banner.

After just one round at Oulton Park, ‘Hizzy’ got motorhome curtains twitching, arriving at Donnington Park in Kawasaki leathers. Hislop called Yamaha’s bluff and refused to accept another unfulfilled promise.

Yamaha’s replacement for Hislop at the TT? Mr Carl Fogarty.

Enter Norton team manager, Barry Symmons. Discovering Hislop’s free agent status for the TT, Symmons immediately pounced. Securing the hottest property in road racing would be a huge scoop for Norton. No one, including Hislop, believed the Norton could survive the onslaught of the TT.

With no other options, Hislop agreed to ride a white Norton in the 1992 F1 and Senior TT races. With one month to go, the small matter of raising £25,000 remained a hurdle for Hislop and Norton.

Abus locks and EBC brakes gathered £10,000 but this was still insufficient. Eventually, the Isle of Man tourist board stepped in with a further £10,000 support. Following some anxious calculations, Symmons declared they could go racing. 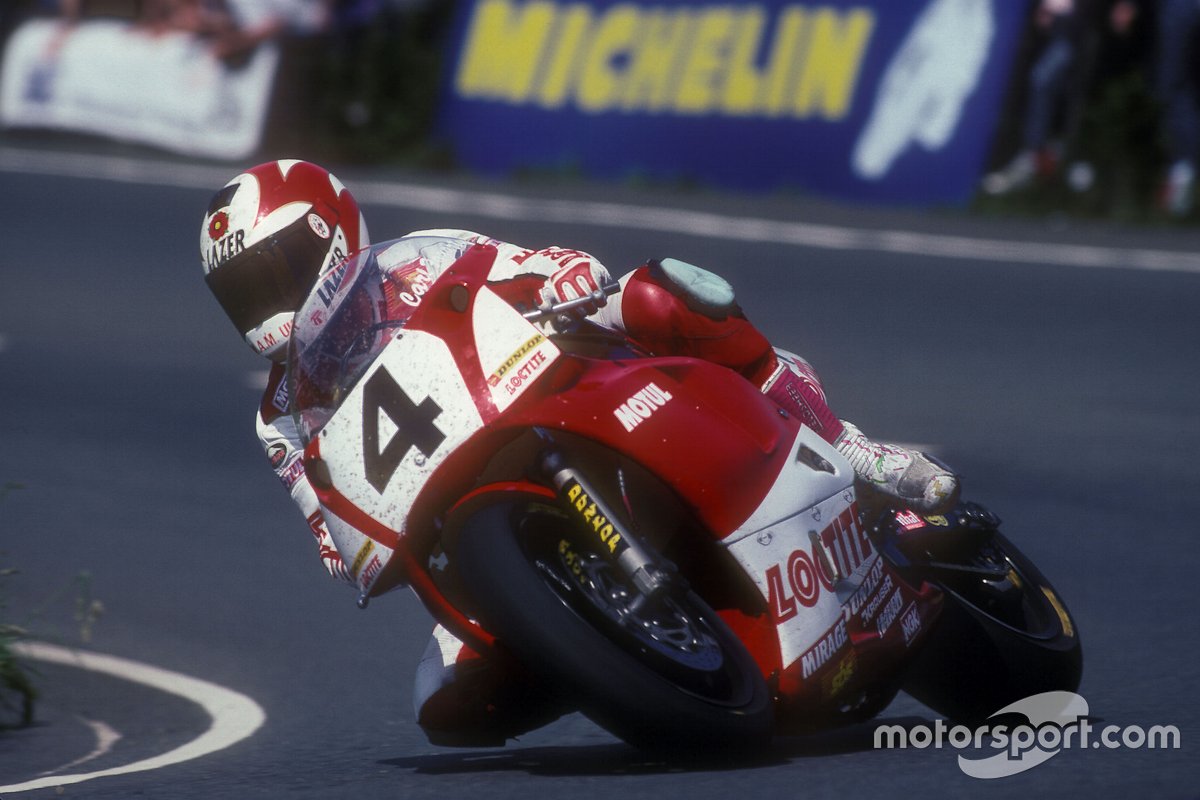 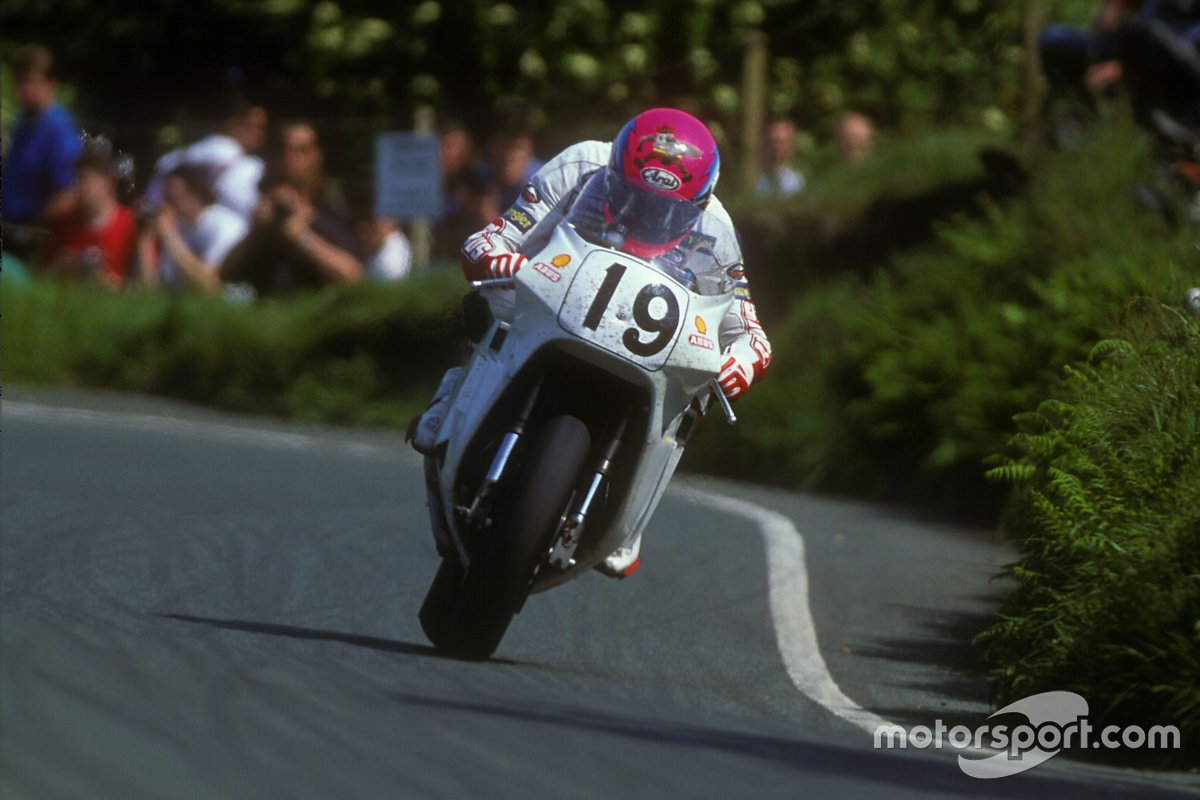 1992 TT week began with a prologue for the titanic battle of the Senior TT. In the F1 TT, Fogarty charged into a commanding lead, with Hislop ailing on his overheating Norton. Neither would don the winner’s wreath. Fogarty’s blistering pace eventually proved too much for the Yamaha’s gearbox, leaving the Lancashire man devastated to miss out on victory. Honda’s Phillip McCallen inherited victory following Fogarty’s mechanical failure. Meanwhile, Hislop limped the Norton home in second place.

With no budget to make radical changes, Hislop’s Norton team took to Jurby airfield to make rudimentary modifications to the 588cc machine. To avoid ‘Hizzy’s’ diminutive frame being pushed back on the bike, a taller screen was fitted. Wider handlebars improved stability too, a key element to a successful TT bike. To encourage vital airflow to the overheating engine, the front mudguard was binned. These ‘homebrew’ modifications proved vital for Hislop.

Senior TT day was blessed with sizzling sunshine. Joy for the bands of fans lining the mountain circuit. For Hislop’s screaming Norton Rotary, the conditions were hellish. Advantage Fogarty and Yamaha.

For Hislop and Fogarty, this was to be a farewell TT race together. So, it was all or nothing.

As the race began, each rider charged off at ten second intervals. Fogarty started fourth on the road. Hislop nineteenth. Therefore, the Scotsman had to fight through slower traffic as the race progressed.

In the 1991 F1 race, Hislop broke Fogarty’s resolve by engaging maximum attack from the initial drop of the clutch. For this encounter, a different tactic was required. Hislop employed his “older style of riding” and settled gently into a rhythm. It worked. Hislop led into the pits on lap 2 by 2.8 seconds.

In a tactical masterstroke, Hislop opted to change his Michelin rear tyre. In theory, this ensured tyre performance when engaging in the inevitable last lap dogfight. Fogarty dashed out the pits without changing a tyre, pinching Hislop’s lead.

Hislop utilised every inch of the road between the walls and hedges from Douglas to Ramsey. Fogarty wound up the Yamaha over the mountain section. Hislop swept the perfect line in his trademark elegant style. Fogarty wrestled the Yamaha’s handlebars like a prize bull fighter. Two deeply contrasting individuals, inseparable on the timesheets.

By lap 4, Hislop stretched a 7.4 second lead. However, a pit lane blunder eroded the advantage. Fumbled fuelling meant Hislop’s lead fell to one second. Nevertheless, with typical Steve Hislop serenity, the Norton man rebuilt his lead to 6.4 seconds for the final lap.

Hislop, with Fogarty furiously chasing, exhibited composure that few possess. Without the luxury to back off but a Norton surely taking its final gasps, ‘Hizzy’s’ calm temperament proved crucial.

Due to their respective starting positions, a near three-minute wait for Hislop agonised every soul on the Island. Eventually, a white Norton howled into view as the clock ticked down. By just 4.4 seconds, Steve Hislop had made history. A new race record and the first to win the Senior TT on a British motorcycle since Mike Hailwood in 1961.

Fogarty and Hislop never considered any other opponent. Contrary to belief, Hislop and Fogarty weren’t driven by hatred. They elevated their speed fuelled by mutual respect. The nearest finisher? Robert Dunlop. Two minutes behind.

Hislop later declared the 1992 Senior TT “probably my greatest race.” Quite a boast for a man who won over a third of the TT races he started.

For Norton, this win could’ve transformed a neglected brand. Britain’s mainstream press flocked in numbers unseen since Hailwood’s return in 1978. ‘British marque wins against the odds against Japanese giant’. It should’ve been a landmark day for a firm that once ruled the TT.

On return to base, Norton team manager Barry Symmons received a hearty welcome on the shop floor. However, senior management’s response was lukewarm at best. CEO David Macdonald’s only comment on the momentous TT triumph was to ask why their pit looked messy on TV. Such was Macdonald’s absence of interest in motorcycling and incompetence to spot a commercial opportunity.

Marred by alleged financial impropriety, Norton was sold off to a Canadian firm in 1993, only to surface at the TT years later with another all-time great on board. But, that’s another story.