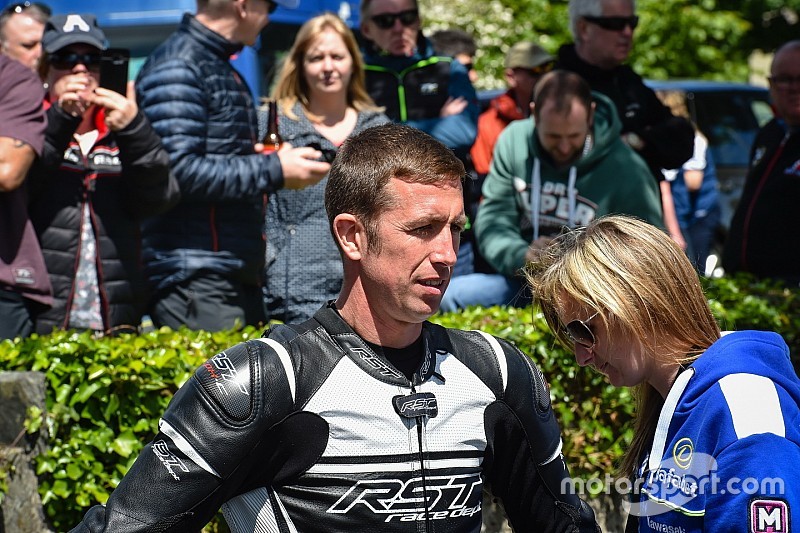 Injured Isle of Man TT rider Steve Mercer has undergone further surgery that "didn't go as well as hoped", but is "taking a step in the right direction".

Mercer was involved in a collision with a course car that was travelling to the scene of Dan Kneen's fatal accident on the Wednesday of practice week, and was taken to hospital in Liverpool with multiple serious injuries.

His condition has improved and deteriorated since the initial surgery on his leg and pelvis two weeks ago, and he is scheduled for more on his leg after a six-hour operation on it and his ankle did not go to plan because dirt got into the wound.

Mercer is currently stable, and has been able to breath on his own for short periods of time this week, while doctors are confident his leg can be mended.

His wife Caroline has also been able to use money donated through a Just Giving fund to purchase a fan to keep Mercer's temperature down, and says the messages of support for her husband have "overwhelmed" him.

"Sorry for the lack of updates, it's been a long difficult week for us," Caroline said in an update via Facebook.

"Steve had six hours of surgery on his leg and ankle today which didn't go as well as hoped due to dirt in the wound, however he is booked in for further surgery later this week to finish what they started.

"It's the first of many operations on his leg but they're confident they can mend it.

"He has been very up and down this last week and just as we think he's making progress he takes a few steps back but he has managed a few hours today and yesterday without his ventilator so it looks like we're finally taking a step in the right direction.

"He's still having problems with his temperature, which was up to 39 degrees yesterday.

"The hospital fan was broken and they didn't have another so I made his first purchase from the very, very generous donations we have received and got him a fan which reduced his temperature back down to a much more comfortable 36 degrees.

"I quite literally can't thank each and everyone of you enough for your amazing kindness and donations.

"I have been reading him messages from the just giving page today and he's overwhelmed. Thank you just doesn't cover how grateful we are to all of you."

An investigation into Mercer's incident with the course car is currently under way, while a new red flag procedure was implemented in the immediate aftermath to avoid a repeat.