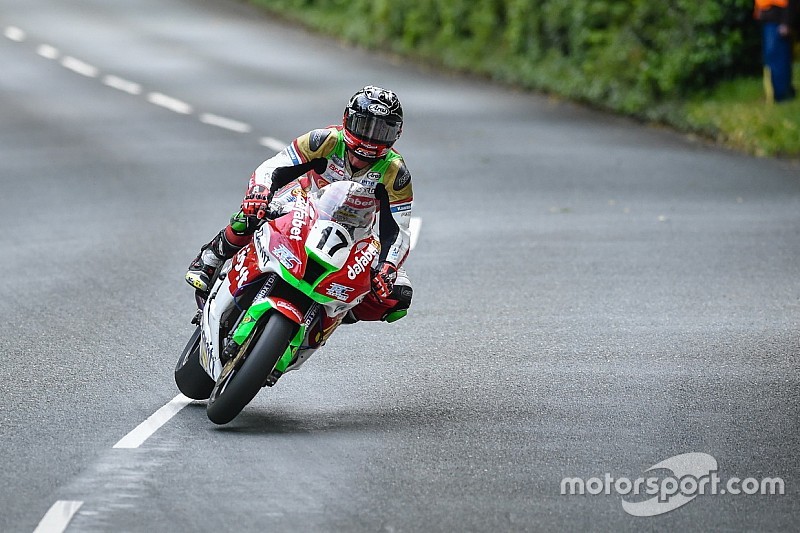 Isle of Man TT racer Steve Mercer's condition has "deteriorated over the last few days" but he is being "well looked after" in hospital in Liverpool, his wife Caroline has confirmed.

Mercer collided with a course car on the way to the scene of Dan Kneen's tragic accident at Churchtown during last Wednesday's Superbike practice session.

The Jackson Racing rider was transferred to hospital in Liverpool having initially been taken to Nobles hospital on the island, and was diagnosed with a broken heel, T12 vertebrae and larynx, as well as neck damage.

Mercer underwent surgery last Thursday on his pelvis and leg, and is having his breathing assisted due to the neck and larynx injuries.

His condition was described as stable by wife Caroline on the weekend, but a further statement from her on Tuesday afternoon revealed he has suffered bruising and swelling to his brain stem, and this is stopping him from having his breathing tube removed.

"Unfortunately Steve wasn't able to have his breathing tube removed as his condition deteriorated over the last few days, but he's being very well looked after by the critical care teams he's with," wife Caroline said.

"An MRI Scan has told us that he has bruising/swelling to his brain stem, which is causing problems in the passing of information from his brain to the rest of his body.

"It is just a waiting game now to see how he recovers when the swelling goes down, but when he is awake enough I am still passing on you messages of love and support."

Mercer returned to the TT with the Jackson Racing squad despite announcing his retirement following a crash at last year's event.

An investigation is currently underway into Mercer's collision with the course car, while a new red flag procedure was put in place immediately after the incident to avoid a repeat.

During Monday's Supersport race, Scottish rider and newcomer to the TT Adam Lyon died in a crash on the third lap at the 28th mile of the course.

Sidecar driver Tony Baker and passenger Fiona Baker-Holden were involved in a crash during Saturday's Sidecar race, but escaped with a leg fracture and soft tissue injuries respectively.