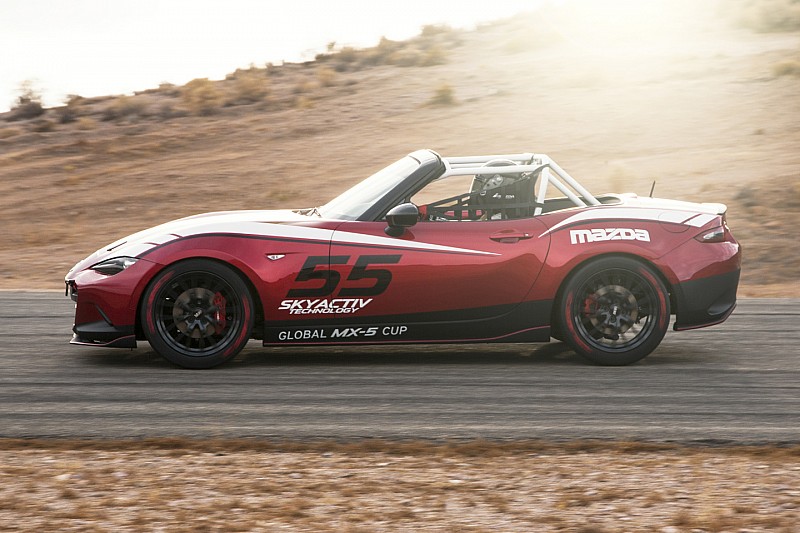 Turn-key car has less horsepower but is faster than current model.

Having a turnkey, ready-to-race car removes the effort of engineering and costs of fabrication, enabling the racer to focus on racing. All racers can purchase identically-built race cars so that driving talent will be the number one determining factor for on-track performance, rather than budget, engineering capability or fabrication skills.

We drive the new car

Motorsport.com was among the first outlets to drive both the new fourth-generation MX-5 Cup race car, and the street car. The race car is lighter than the third generation, and in a test was two seconds faster on a medium-sized track. The 2016 model has slightly less horsepower and is slightly smaller.

The new four-cylinder engine, while having less horsepower, has much moe usable torque, and doesn't require the driver to rev the engine as high to come out of corners. The six-speed manual transmission is superb. Suspension part suppliers  have been chosen but not announced, though be assured they are top-tier components.

Long Road Racing fabricated a cage that had to meet safety standards of sanctioning bodies around the world, including the FIA, since this car -- in left- and right-hand drive -- will be raced around the word. America and Japan will be first, with Europe close behind.

“For the past decade, the third-generation sports car has been competing in our own MX-5 Cup series, and has been the ideal platform to showcase driving talent in a competitive environment on high-profile race weekends,” said John Doonan, director of motorsports, Mazda North American Operations (MNAO). “With the launch of the fourth-generation MX-5, we are raising the bar by making it even easier for aspiring professional road racers to get involved. We expect to sell out the first batch of cars rapidly.”

The MX-5 Cup series champion earns a $200,000 scholarship to move to a higher level series with Mazda the following year. Additionally, the 2016 Global MX-5 Cup series will culminate with a global finale at Mazda Raceway Laguna Seca in Monterey, Calif. with entrants from around the world to crown a global champion. A one-day test in Mazda’s top-level IMSA Weathertech SportsCar Championship SKYACTIV prototype race car will top the list of prizes bestowed on the global champion.

Priority to purchase the new car will be given to current competitors in the Battery Tender Mazda MX-5 Cup presented by BFGoodrich Tires, and others who intend to compete in the 2016 Global Mazda MX-5 Cup. MX-5 Cup cars built by Long Road Racing will be eligible to compete in club racing with the Sports Car Club of America (SCCA) and National Auto Sport Association (NASA) as well as many track-day clubs.