Just two weeks after breaking his pelvis at the Southern 100, 19-times Isle of Man TT winner Michael Dunlop secured two victories on his return to the Armoy Road Races. 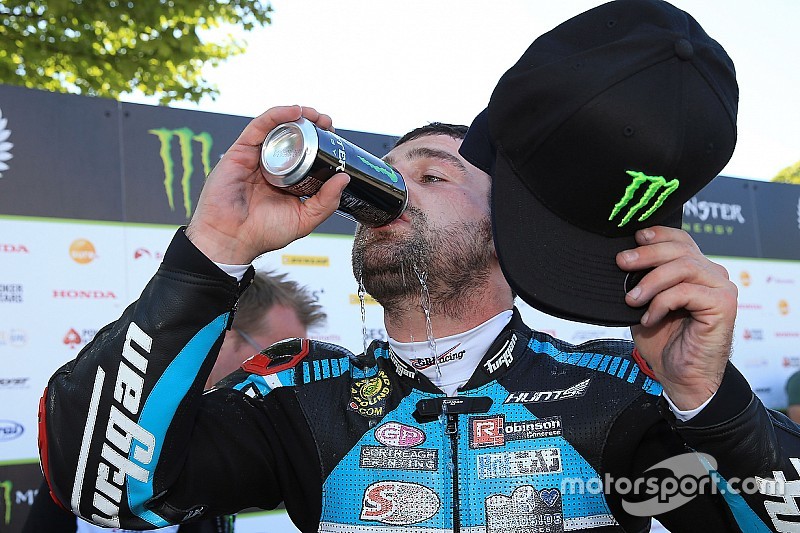 Dunlop was chasing down eventual solo champion Dean Harrison in the second Superbike race of the S100 16 days ago when he highsided and suffered a broken pelvis, as well as other minor injuries.

Though discharged from the Isle of Man's Nobles Hospital that same day, his participation in upcoming races – including Armoy and August's Ulster Grand Prix – was in doubt. This came just week after he injured his shoulder in a crash during Rally Donegal. He also hurt his wrist in a testing spill prior to May's North West 200.

However, Dunlop turned up at Armoy armed with his Tyco BMW S1000RR and his MD Racing Honda Supersport bike, putting the former in fourth on the grid in qualifying for Saturday's Open race. He carved his way to the front of that race, and managed to open up a lead of 4.4 seconds to seal victory on his return to the Irish national scene following the death of older brother William at last July's Skerries 100.

On Friday, Dunlop kicked off his Armoy event with a fifth in the SSP race, though he failed to finish the second one on Saturday.

In the 'Race of Legends' SBK finale - which was restarted following a red flag caused by a crash for Darren Cooper – Dunlop once again beat Burrows Engineering Suzuki rider Derek Sheils aboard his BMW to secure his second victory of the meeting and eighth-successive win in the 'Race of Legends'.

Elsewhere at the Armoy races, Derek McGee – who recently returned to action following a broken leg suffered in a crash at the TT – took three victories across the meeting. The first came in controversial circumstances, when he and initial SSP race one winner Paul Jordan collided after the chequered flag.

The pair crossed the line side-by-side, with a review of the photo finish reviewed by timekeepers leading to McGee being declared winner by a margin of 0.012 seconds. Jordan did not take his place on the podium, and disillusionment with race direction decisions as well as a small thumb fracture led him to sit out Saturday's racing.

McGee won the second SSP race on Saturday and the Moto3/125cc event, but was a retirement from the Supertwins race. He completed the podium in the final SBK contest.

The next international road race of the season is the Ulster Grand Prix, which takes place from August 5-10.