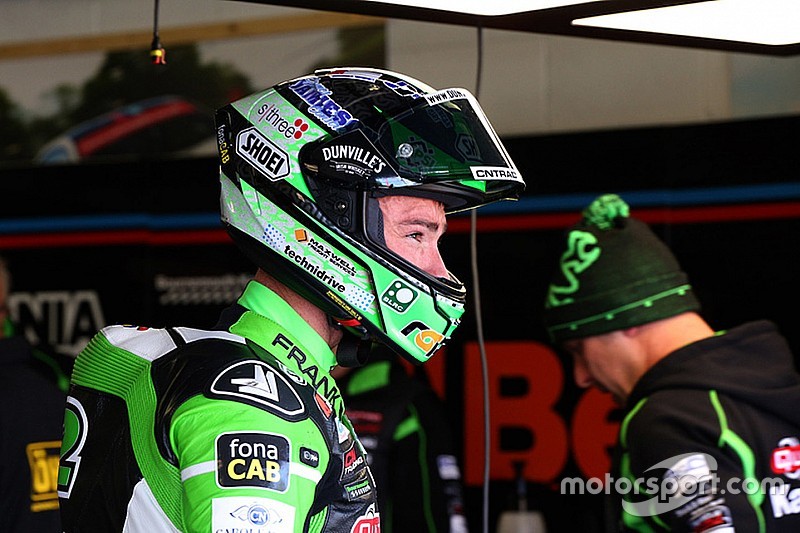 Due to lengthy delays in the schedule, the first SBK race of the day was run over four laps instead of the original distance of seven, with Irwin, Hillier and Conor Cummins breaking away from the rest early on.

It was poleman Irwin who grabbed the holeshot at the start, while Cummins plummeted to the back of the first wave after lighting up the rear of his Padgetts Honda off the line. Alastair Seeley powered his Paul Bird Ducati past Irwin on the run to York corner, and reclaimed the lead exiting University corner having relinquished it moments early at Station corner.

However, the Bournemouth pair eased ahead into Mather's chicane, with Hillier – who opted to run his Superstock-spec ZX-10RR – outbraking Irwin into Metropole, while Cummins recovering from his poor start to fifth. Cummins's charge continued on lap two, as he passed the Burrows Engineering Suzuki and the struggling Seeley for third on the run to University.

Hillier held a 0.8-second advantage at the start of the penultimate tour, with Irwin resisting Cummins's advances for second. Irwin made a play for the lead the Magherabouy chicane on the final lap, but Hillier repeated his move at Metropole from the first tour to head across the coast road in front.

The pair swapped place at Juniper Hill, with Irwin shutting down a retaliation from Hillier to secure his fourth NW200 victory. Cummins completed the podium. Sheils beat Seeley for fourth, with NW200 debutant Richard Cooper taking sixth on the Hawk Racing Suzuki ahead of Michael Rutter on the Bathams Honda MotoGP replica.

John McGuinness's race return at the NW200 ended in 11th on the Norton, while Tyco BMW's Michael Dunlop retired at the end of lap one.

The twice red-flagged six-lap Supersport encounter was won by Padgetts Honda's Davey Todd, who prevailed against Derek McGee and Cummins to claim his first NW200 win. A massively depleted field was headed by Todd off the line, though first was traded between himself, McGee and Cummins across the six laps.

Todd usurped team-mate Cummins to start the last lap in the lead, and held him and McGee (McGee Racing) at bay to take victory, while Paul Jordan [Paul Jordan Racing] and Christian Elkin completed the top five.

The treacherous conditions forced the likes of Hickman, Harrison, Dunlop, Thursday SSP winner Lee Johnston (Ashcourt Racing), Hutchinson and Hillier to sit out the race. Polesiter Seeley did take the first restart, but was ruled out for the second after his EHA Yamaha expired on the run into University on lap one, which brought out the second red flag of the day.