Joey Bickers earned his spot in the ultra-competitive series by beating out some equally tough competition in the Mazda Club Racer Shootout.

TOPEKA, Kan. – Joey Bickers, of Moorpark, Calif., will be one of the new faces in the SCCA Pro Racing Mazda MX-5 Cup Presented by BFGoodrich Tires paddock when the 2014 season opens at Sebring International Raceway. Bickers earned his spot in the ultra-competitive series by beating out some equally tough competition in the Mazda Club Racer Shootout.

The first two rounds of racing for the Mazda MX-5 Cup are scheduled to be held March 12-14, as part of the 61st Mobil 1 Twelve Hours of Sebring Presented by Fresh from Florida. 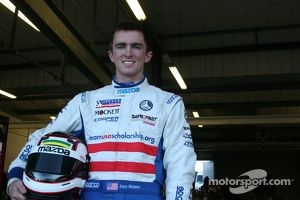 This will be the third consecutive year that the Mazda MX-5 Cup has opened its season at one of the marquee North American sports car racing events. However, it will be the Californians first time driving the course behind the wheel of a race-prepped Mazda MX-5 Cup machine.

Bickers, who will turn 23 just prior to this year’s Houston event in late June, has been on a meteoric rise in the motorsports world. After starting his racing career at the beginning of 2012, Bickers has won not only the Mazda Club Racer Shootout, but has also taken part in the Team USA Scholarship program. In that short timespan, Bickers has competed in karting, F1600 formula car racing and the NASA Teen Mazda Challenge.

“In February 2012, I went to the Jim Hall Kart Racing School,” said Bickers. “It was in those first few laps that I knew this is what I was going to do, I was going to try my very best to make [racing] my career.”

Even before turning 16, Bickers was interested in cars, but more specifically driving them. Once he got his driver’s license Bickers’ passion became a reality.

“I got my driver’s license at age 16 and started building an off-road truck,” Bickers said. “There were some trails near my house that I could go to, and basically just experiment with driving. It was a perfect outlet for me.

“I would go to these trails almost every day, for about two to three years, until I found karting. Karting was the right step for me to take, because I really wanted to pursue a racing career. I was tired of just playing around.”

Regardless of having less seat time than many serious drivers his age, Bickers has started to gain the attention of the motorsports industry. As part of the Team USA Scholarship program, Bickers was given the chance to compete, in England, in the Formula Ford Festival at Brands Hatch and the Walter Hayes Trophy at Silverstone.

While Bickers’ overseas foray was marred by a couple on-track collisions while trying to avoid spinning cars, he came away from the situation having learned some valuable lessons.

“The competition in the UK is fierce,” Bickers said “But, quite honestly, I think the biggest challenge I face is the one I put on myself. I just can’t accept losing and it may sound cliché, but I just feel like there is no reason why I can’t win a particular race.

“I found this year that you can’t win every race. But, you can try your best and have the right attitude. If you give maximum effort, the results will come.”

While stressful, and sometimes frustrating, the close racing Bickers experienced over in England may be beneficial when making the transition to the Mazda MX-5 Cup. In a series know for close finishes in even more closely matched cars, having the patience and desire to get to the front of the pack becomes very important.

“What motivates me is the desire to drive at the limit,” Bickers said. “That alone has given me the motivation to succeed this year.

“I don't want my chances to go to waste. I am very lucky to get the chance to race, and I want to make the most of it. I want to, one day, compete at the highest level of racing, wherever it may be. I want to make it there and win. To do that I know I have to perform in every race I go to. Every race counts.”

Like any career-minded racer, Bickers has some ambitious goals for his racing career. With his success in such a short amount of time, chances are good he will be able to cross some of those goals off his bucket list.

“My short-term goals are to win the 2014 Mazda MX-5 Cup Championship,” Bickers said. “It may seem like a long shot because it will be my rookie year in the series, but I know I have a chance.

“As far as long-term goals go, I would just like to continue learning, improving and progress up the racing ladder. I want to make it to make it to IndyCar or the TUDOR United Sports Car Championship, both being the top tier of American auto racing. Some may say that I need to have a specific destination or goal. However, not having been in the sport for long, I am still trying to discover myself in racing.”

At this point, Bickers has tested with several teams but has not made a decision on which team to join for 2014.

While Bickers will assuredly face some stiff competition this year in the Mazda MX-5 Cup, he is appreciative of the opportunity afforded him by MAZDASPEED Motorsports Development.

“I am very grateful for the opportunity Mazda has given me, to compete in the Mazda MX-5 Cup,” Bickers said. “I am looking forward to making the most of this opportunity and giving my best effort in the coming season. I have been training harder than ever, preparing myself to exceed expectations in 2014.”

See Bickers and the other drivers of the Mazda MX-5 Cup for the 2014 season-opening doubleheader at Sebring, March 12-14, in support of the 61st Annual Mobil 1 Twelve Hours of Sebring Presented by Fresh from Florida.

Herta enters blue-flag debate – and admits he killed a squirrel