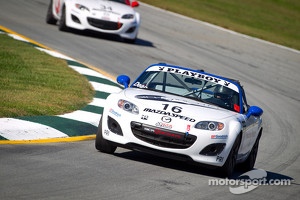 “I didn’t get to drive yesterday [at the promoter test day] because we fell behind a little at the shop with other projects,” Dean said. “I was worried that we would get behind by not getting that data, but the other guys are really solid. I think Ethan [Low] did a really good job and so did Danny [Bender] and Sparks. I put on the same setup they had, and went from there.

“We had some really old tires, from the middle of last year, on the car and it felt great. Being fastest at my home track in the first three laps I turned felt really good. I have a lot of friends and family that are watching live timing, so I’m sure I’ve got a million text messages. We’ll just learn from this as we move into the second practice and qualifying.”

“We had a lot of stuff to work out after yesterday, but I think we’ve got them fixed,” Landy said. “It’s tough to say what will happen for the rest of the event. I don’t think anyone has gotten a handle on the new tire yet, so whoever can figure that out the quickest will have an advantage.

In his debut in the Cup class, Koch showed he has the pace to be a contender as he set a 2:32.744 (87.779 mph). That time resulted in Koch setting the third-quickest time behind the wheel of the No. 12 ALARA Racing/Mazda Motorsports Development MX-5.

“I didn’t know what to expect coming into the weekend, since I haven’t driven with these guys before,” Koch said. “My only experience for the past three years has been running with the Skip Barber guys. Jumping into a new class and new car is a different world for me.

“Being top three in this practice, and the quickest in the final session yesterday, it feels good. We still have some time left on the table, so things are looking up. But, you can’t predict anything at this track.”

SCCA National Champion Andrew Charbonneau, of Delray Beach, Fla., finished the practice session in fourth. He set a 2:32.085 (mph) at the controls of the No. 15 ALARA Racing MX-5.

Series sophomore Patrick Gallager, competed the top five. He turned in a 2:32.149 (mph) while driving the No. 28 MedBuild/Henry Schein/ModSpace MX-5.

Robby Foley, of Randolph, N.J., set the fastest time in the Skip Barber MAZDASPEED Pro Challenge class with a 2:33.913 (mph).

“We were the first session this morning, so that track was a little dirty,” Foley said. “Once I was able to get some heat in the tires, I was able to click off some pretty decent laps. We have a little bit more to dial in, but the car should be pretty good for qualifying.”