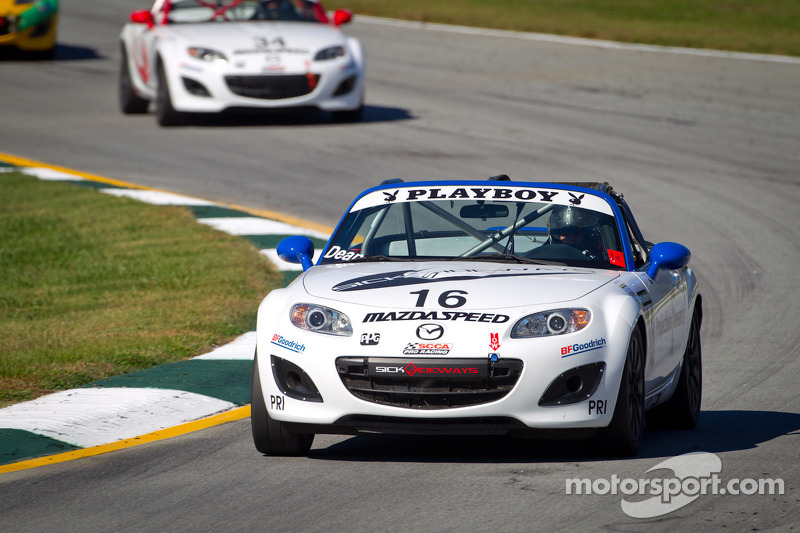 Round Four of the SCCA Pro Racing Mazda MX-5 Cup Presented by BFGoodrich Tires is set for an 8:00 a.m. (PDT) start on Saturday.

Dean did not get off to a smooth start, in a very literal sense, for the 45-minute race that averaged 65.077 mph around the 11-turn, 2.238-mile permanent road course. Starting from second in his No. 16 Projections Research/PPG MX-5, Dean had a good start next to Koch, the polesitter. Koch missed a shift going from first to second gear, giving Dean a slight advantage. Then Dean did the same thing going from second to third, equalizing the two cars going into Turn Two. Dean would come out on top, taking the early lead.

The race at the front did not end there. Following two separate incidents that forced Charles Paquin and Chris Beaufait off track in Turn Four, a full-course caution was called. The field circulated behind the pace car for five laps, with Dean in the lead. Following the restart Landy took the lead from Dean and held the position for five laps. By the conclusion of Lap 14, Dean had regained the lead and worked to put a gap between himself and second place.

“Those first few laps were tight and fun,” Dean said. “When Landy was able to squeeze by Koch, for second, I was pretty stoked from a points perspective.

“On the restart, I was trying not to get to the throttle too early, but everyone managed to drive by me. I had to really fight to get back by Landy for the lead. Once I did, those guys [Landy and Koch] had a real battle, giving me the chance to break away. It was tough to run as hard as I could, but save the tires at the same time.”

Once Dean got around Landy, it was Koch’s turn to go on the attack. At the controls of his No 12 ALARA Racing/Mazda Motorsports/BFGoodrich Tires MX-5, Koch was able to make an outside pass, on Landy, at Turn Two stick. From there, Koch was able to hold onto the second position.

“I think I went from the front to the back of the lead pack a couple times,” Koch said. “I made a couple moves out there that hurt me. At one point, in Turn Five, I took a look around the outside of Landy which made me a little loose and cost me a couple positions.

“I think we had the pace to hang with John [Dean], but we just ran out of time today. It was a fun race, but also a little frustrating.”

In the No. 41 Excitations.com/Atlanta Motorsports Group MX-5, Landy showed he is a force to be reckoned with in 2014. With a new team, Landy is brimming with confidence after scoring his second podium finish of the young season.

“I was waiting for the race to come to me and saw the two Skip Barber cars off course,” Landy said. “So I thought to myself that I should make up a couple positions before the double yellow comes out. I was able to do that, then had a great restart to get around John [Dean]. Both Dean and Koch were able to get back around me, but we raced each other cleanly and fairly.

“I feel great with what we have done this year. There’s a different feeling when you’re running toward the front in a series like this, which is so competitive. But, there’s a part of me that wants to get to the top step of that podium. That’s what keeps me striving for more.”

Finishing just off the podium, in fourth, was Lucas Catania, of Cazenovia, New York. He had a strong showing, passing four cars for position in his No. 17 Atlanta Motorsports Group/New York Spine & Wellnes/SOS MX-5.

Patrick Gallagher, of Thornville, Ohio, brought his No. 28 MedBuild/Henry Schein/ModSpace MX-5 home in fifth. He was part of the lead pack for the entire racing, getting as far up as third place on lap 10.

In the Skip Barber MAZDASPEED Pro Challenge, Ben Albano, of Greenwich, Connecticut, took his first win in the series.

“It’s awesome to win at Mazda Raceway Laguna Seca,” Albano said. “Being a part of this whole Mazda Community is such a great thing. This was my second time racing at this track. I ran the 2012 Skip Barber Summer Series here, and was right with Kenton [Koch]. I almost had him, too, which gave me a lot of confidence since this is his home track.

Completing the podium was Robby Foley, of Randolph, New Jersey, and Lucas Bize, of New York.

Following Round Three, Dean holds the Mazda MX-5 Cup Championship lead with 189 points. Koch sits 13 points back, in second, while Landy is third, with 158 points.

Round Four of the SCCA Pro Racing Mazda MX-5 Cup Presented by BFGoodrich Tires is set for an 8:00 a.m. (PDT) start on Saturday.