SEBRING, Fla. – John Dean, of Sebring, Fla., scored an emotional victory in front of family, friends and supporters in Round Two of the SCCA Pro Racing Mazda MX-5 Cup Presented by BFGoodrich Tires as part of the 62nd Annual Mobil 1 Twelve Hours of Sebring Fueled by Fresh from Florida. Kenton Koch, of Glendora, Calif., finished second, followed by Dean Copeland, of Bowie, Md. 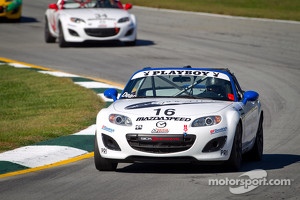 Dean bounced back to take the 0.542-second win over Koch, following a second place finish in Thursday’s Round One which was decided by 0.053-second.

The race was slowed to an average of 73.438 mph around the 17-turn, 2.74-mile permanent airport course due to a four-lap caution period brought out when Johan Schwartz and Zach Lee collided in Turn Three on lap six. Both drivers were okay following the incident.

This race marked Dean’s second win at the circuit in Mazda MX-5 Cup competition, however this win was comparatively more comfortable than his first win in 2012. Driving the No. 16 Projections Research/PPG MX-5, Dean exerted his control on the race from the beginning by completing the opening 12 laps in the lead. On lap 13, Copeland took over the top spot, but that was short lived as Dean recaptured the position for the remaining two laps. En route to the win, Dean also lowered the race-lap record to 2:29.059 (89.360 mph).

“It’s so much fun to be able to win in front of my friends and family,” Dean said. “Yesterday was a bit of a bummer. I really wanted to win, but that just made me push harder today. I went back to the drawing board, talked to the BFGoodrich guys a bit, and was able to find a setting that was able to make the tire work today.

“Dean [Copeland] had a fantastic race, today. He got up there and it’s always fun to race with him because he’s clean, but very aggressive. That added some additional character to the top three. In the end, it may have helped me out that he was toward the front.

“This is my second win here, in Mazda MX-5 Cup, but I’ve also been on the podium in all six races that the series has been here. That’s really cool and I was really hoping to do that. I’ve got a lot of supporters behind me and the team, and it feels really good to bring home trophies.”

Driving the No. 12 Mazda Motorsports Development MX-5, Koch was in a position to repeat his win from Thursday. For all but two laps, Koch was lurking in second waiting to pounce if the opportunity arose. However, passing the determined Dean, while holding back the charging Copeland, proved to be unfeasible.

“I was really hoping there wasn’t going to be a caution,” Koch said. “I was nipping at Dean’s heels for the first part of the race. It really came down to who was going to make the least number of mistakes. I would make one mistake, and it would drop me a tenth, then he would make a mistake, and I would gain a tenth.

“Once I got in a rhythm, I started to reel Dean in. When the caution came out, I was a little frustrated. I knew Copeland was right behind us and that we had been gapping him before that. Once he [Copeland] got back into the mix, it was a four-way battle for the lead, like yesterday. On the last lap, I was in third and was able to get by Copeland on the back straight and was able to move to P2.

“The series is extremely competitive, and it seems more that way this year than any other. With all the teams getting their stuff together, and Atlanta Motorsports Group coming back, it will be intense.”

Copeland notched his first podium finish of the young season, at the controls of the No. 7 Copeland Motorsports/Sync Speed Inc. MX-5. The finish came on the heels of a strong race, in Round One, that ended early due to a broken transmission.

“We had a horrible start,” Copeland said. “We got off in some slippery dew from this morning, in Turn One. Sebastian [Landy] and I got wide and slid a little. We lost the top two there, and spent the first half of the race trying to reel them in.

“Once the caution came out, it was on from there. We go out in the front with two laps left, and those guys just lined up on me. They got hooked up and I really didn’t have much for them. On the last lap we had some wheel spin out of Turn 16 and John [Dean] pulled away. It’s bittersweet. I thought we had a better car yesterday, when the transmission broke, but I’ll take it.”

Finishing fifth was Andrew Charbonneau, who drove the No. 15 ALARA Racing MX-5. The finish was a marked improvement for the SCCA National Champion driver who qualified sixth. In Thursday’s race, Charbonneau also started sixth but was unable to hold the position resulting in a 13th-place finish.

Bryan Hixon, of San Antonio, Texas, took the class win in the Skip Barber MAZDASPEED Pro Challenge, while driving his No. 63 Blackmore Partners/xBorder Foods & Wine SBMX-5. His win from the class pole puts him in the lead of the season-long championship point battle.