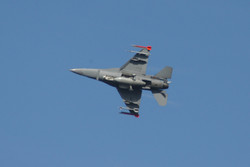 Jet landing at Homestead Air Base

Cooper, who was fast all weekend, started today’s race second in the No. 6 AMG Racing/VEND3.com MX-5 Cup. In fact, four laps into the race, he took the lead and battled Mosing for the next four laps to keep that lead.

Unfortunately, on lap 9, both Mosing and Copeland passed him, and Cooper dropped to third. But, he was never more than a second behind Mosing and Copeland, as it was a virtual three-way battle for the race lead until lap 19 of the 28-lap race. At that point, Cooper took the lead with nine laps to go and never looked back, winning by 1.212-seconds over Mosing’s No. 10 ALARA Racing/RaceNowForAutism/Frank’s International MX-5 Cup.

“The three cars were pretty equal – me, Dean and Jeff,” Cooper said of his battle Copeland and Mosing. “I was better in some places and they were better in some places. So, it was actually hard to get by one another. I knew that we had pretty equal cars and that they’d be pushing each other to go, trying to catch up to me. And, that I’d be punching a hole in the air. But, once we were out that far, I was just able to focus, hit my marks, and do the lap times we needed to do to stay out front and get the win.”

Mosing captured his first-career pole yesterday following qualifying and led the first three laps of today’s race until he relinquished it to Cooper. Mosing knew he had a fast car, but needed to keep Cooper within striking distance – which he did.

Mosing regained the lead on lap nine and held it until lap 13. That is when Copeland took the lead. For the next 16 laps, Mosing battled to hold second place, swapping that position several times with both Cooper and Copeland. With two laps to go, he secured second place for good, equally a career-best finish.

“I got a good start on the green,” Mosing said of his race start. “I was hoping they would try to dice it up early on. You get kind of antsy the first few laps. I was hoping to gap them enough to run out on my own, but the draft is huge here. So, it was only a matter of time before the other lead pack caught up to me and we started racing.

“We all kind of mentally decided, ‘do we want to race each other now and let the rest of the pack catch us. Or, do we all just call a truce for now and in the last five laps, then we’ll try to change positions.’ Without even talking to each other or being on the same team, we all kind of worked together and tried to get a gap so that at least we weren’t racing 15 other cars. We were just racing each other. I want to dedicate my second place finish to my daughter Hannah who celebrates her 13th birthday today.”

Copeland started third in the No. 7 Copeland Motorsports/Synch Speed MX-5 Cup and, much like Cooper and Mosing, he led a significant portion of this race (six laps). Copeland pushed so hard that he established a new fast race lap record with a 1:36.050 (86.205 mph). To put that in perspective, Copeland’s fastest race lap was quicker than Mosing’s polewinning time (136.110, 86.151 mph). But, unfortunately, it wasn’t enough to catch the eventual race winner and he finished third.

“At the beginning there, we got kind of behind,” Copeland said. “I ended up working my way up to the leaders. I was able to get by them and lead for quite a bit there. But then, we had a little bit of an overheating issue. The car slowed down a little bit.

“I think we might have still had something for them. But, we got into lapped traffic with about two laps to go. The leader got a big gap and we could not make up the difference. It was kind of a shame, but it was a great race overall. I had a lot of fun.”

As a result of the aforementioned penalties, the Playboy Mazda MX-5 Cup series Championship point standings are as follows: Cooper and Mosing (62 points), followed by Saini (49), Scott Shelton (47), Scott Dollahite (45).