Teammates Andy Pilgrim finished fifth and Jordan Taylor came home in seventh. The rolling start had the Pirelli World Challenge field funneling into Turn Three with O'Connell (Flowery Branch, Ga.) on the move from his third row qualifying position. By Turn Five, O'Connell moved his CTS-V into third position. The same aggression was shown by teammate Pilgrim (Boca Raton, Fla.) who moved up two positions from his eighth-place start. Taylor (Apopka, Fla.) followed Pilgrim through in seventh. The next eight laps were uneventful until the GT field caught the back of the GTS Class and traffic began to play a role. On lap 11 O'Connell was able to squeeze by Randy Pobst's Volvo to take over second. Pilgrim was able to get by the Corvette of Mike Skeen and take the fifth position with Taylor following on lap 16. Taylor would give back the position when he got balked in traffic a few circuits later. The race was won by Alex Figge in the Volvo. 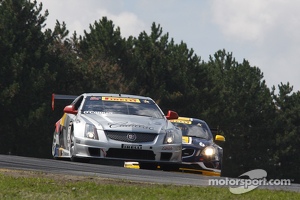 "I had a great start," O'Connell said. "You have a vision in your head about how things will go at the start and I have to tell you I really didn't see that coming. There was a gap and I was forced to do what I did by what Sofronas (James, No. 14 Audi) was doing. I was able to pick up two positions in the first two corners. I was working hard to stay in front of the Audi all race. Pobst had a bobble and I was able to get by him. Then it was pray and work traffic. The race changed when we hit the GTS traffic. I had a lot of oversteer in the car. I had to rely on years and years of knowledge and race craft to keep the position. A good points day for Cadillac."

Pilgrim knew the racing would be close.

"My start was OK," Pilgrim said. "I was able to get by the Audi of Duncan Ende. It was tough, tight racing the whole time. The grid was really close from the front to eighth position. I was happy to be able to move from eighth to fifth. The traffic is difficult. I got hurt a couple of times big in traffic. Some guys are good, others not so accommodating. One time I got caught up and it cost me about three seconds. It is hard to make up that time in this fast field. I got back to Randy at the end there. He went off the track. I think he had a problem going into the last complex of turns and he just edged me at the line."

Taylor also had an exciting run in the traffic at Mid-Ohio.

"I got caught out at the start," Taylor said. "Johnny was coming and I didn't want to make a move on my teammate and the guy who is leading the championship. Once you get a few positions back it is hard to make up ground. The top cars have good drivers in them. I was able to get a position back in traffic. Once it was single file, not much you can do. The traffic was interesting. Some guys use their mirrors and others don't. That makes this kind of racing interesting."

The second of two 50-minute Pirelli World Challenge Races will go off tomorrow at 1:35 p.m.