SCCA Majors season just one race from finish in Topeka 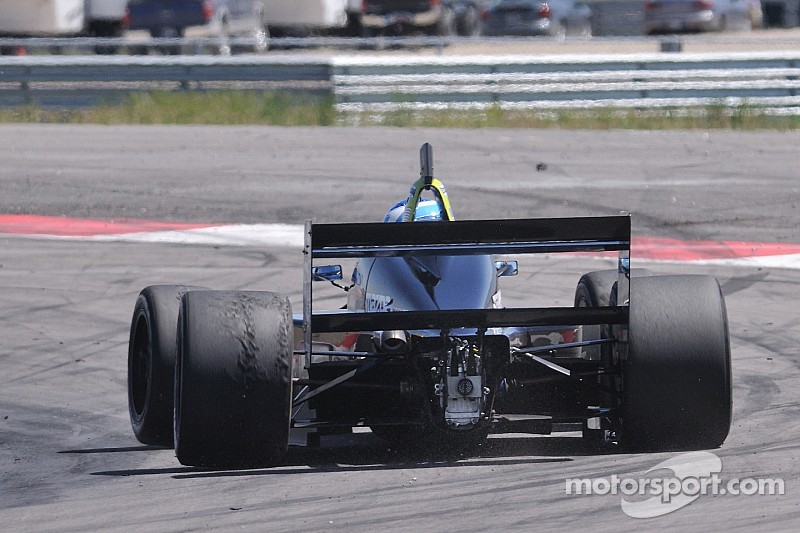 The day began with 25-minute qualifying sessions to set the grids for Saturday afternoon on the track’s 2.2-mile configuration. Saturday’s Round 11 is the penultimate round in the Mid-States Conference season-long point championship, which counts the best eight finishes.

Group 1: Denny Stripling entered the weekend with a 38-point deficit in Spec Racer Ford to championship leader Keith Verges and needing two strong finishes to be able to move to the top of the standings. He helped his cause on Saturday. Stripling’s No. 4 Lightspeed Motorsports Spec Racer Ford led start to finish on Sunday, steadily pulling away from Chris Funk’s second-place No. 54 KC Racing SRF throughout the 16 lap race. Verges finished third in the No. 69 Apex Driving Academy SRF, but needed to finish second or better to add to his Championship points after drops.

A win for Stripling on Sunday clinches the Mid-States Championship. If Verges wins on Sunday, Stripling must finish second. A second-place for Verges forces Stripling to finish fifth or better, while Stripling needs just an 8th or better if Verges is third or lower.

Matt Reynolds set a new Spec Miata track record of 1:35.313 on the way to his flag-to-flag win in the No. 73 Reynolds Bros. Racing/JPM/Vintage Connection Mazda Miata.

Group 2: Michael Mallinen (in photo from a previous outing) drove his No. 71 Swan Motorsports Swift 016/Mazda to a flag to flag victory in Formula Atlantic, ticking off lap after lap to the finish. Mallinen was actually one of two former Formula Atlantic National Champions from the state of Washington entered in the race, along with third-finishing Riley Hopkins in his Ralt RT-4. Mallinen is the defending class champion, while Hopkins’ win came way back in 1983.

Group 3: Max Mallinen continued his winning ways in Formula F, taking a flag to flag class victory in the No. 1 Spectrum 014H/Honda. The 16-year-old set a new track of 1:24.293 to join his dad, Michael, as a race winner on Saturday.

CJ McAbee, racing for the first time since leading at the 2013 SCCA National Championship Runoffs last September, led early in Formula 500 and overall before pulling his No. 15 AJ’s Import Garage/Hoosier AJ’s 2012/Rotax to pit lane on lap 11. That left Herb Noble’s No. 44 Mitchell Racing Services Scorpion 001/Rotax to inherit the lead, but Mid-States Conference champion Timothy Friest moved around Noble on lap 17 in the No. 86 Hoosier/XTRacing/RodEndSupply KBS Mk VII, taking home the win.

Richard Shields went the distance in Formula Vee to not only take the top trophy, but clinch his Runoffs qualifications in the No. 7 Vortech FV.

Group 4: Both David Fershtand and Mark Kirby found themselves behind their rivals early, and both moved into the lead on lap two, cruising to wins in GT-1 and GT-2 on Saturday. Fershtand’s No. 05 Fershtand Race Prepared Chevrolet Corvette around the No. 48 Heartland Park/Baroque Racing Chevrolet Camaro of Eugene Kraus on the second lap to take the race win and clinch his season-long Championship in the Mid-States.

Kirby’s No. 21 Dodge Viper moved around Mike McGinley’s No. 50 Hendrick Chevrolet/McGinley Motorsports on the same lap, and went around a fading Kraus for second overall by the finish.

Group 5: Preston Calvert took the overall win in an effort to nail down the nation-wide Touring 2 point title in the No. 77 Phoenix Performance/Hoosier/Penske/ Hawk Ford Mustang, followed by the two drivers battling it out for the Mid-States Conference title – leader Natha Waldbaum and Steven Coleman.

If the order remains the same on Sunday, Coleman’s No. 25 Race Away Cancer Ford Mustang will walk away with the Conference championship – Waldbaum’s No. 51 Hutter Performance/Vettesport Chevrolet Corvette needs a win to clinch the title.

Jim Wheeler’s No. 20 Hoosier/Wilwood/K.C. Raceware Pontiac Trans-Am was battling overheating problems, but managed the gap back to second-running Trevor Janke’s No. 14 Janke Auto/Blue Ox/Famous Racing Ent. Pontiac Firebird and stayed just in front to the finish.

The Super Touring Lite race was a tail of two races. Cliff Ira set the early pace in the No. 36 Fira Motorsports Acura Integra, leading away from the start and building a gap on Bob Schader. Schader’s newly built No. 12 MiataCage.com/Hoosier Tire Mazda MX-5 started to close by mid race, and the two were bumper to bumper by lap 10.

On lap 12, the duo approached a lapped car in turn 13. With a split second choice to make, Ira guessed wrong – Schader took the opposite path and moved around both and into the lead. Though the margin remained close, Schader’s Mazda stayed in front to a finish of 0.323-second.

Group 6: The day ended with Jesse Prather running away from the E Production field in the No. 34 Jesse Prather Motorsports/MAZDASPEED/ Carbotech/Hoosier Mazda MX-5 to an overall victory, setting a new track record of 1:31.027 in the process. His overall margin of victory closed to just 0.028-second when teammate and F Production winner Eric Prill pulled his No. 7 MaxtonsFight.org/JPM/Hoosier Tire Mazda Miata alongside up the front straight to the finish.

Prill’s race win came after he shook free of Rick Harris’ No. 8 Jesse Prather Motorsports/Hoosier/V8 Roadsters/Mazdaspeed Mazda Miata. He then found himself in the midst of a pair of brothers looking for the GT-Lite win.

Nigel, who started from the rear of the field and worked all the way through, eventually fell back slightly from Prill and each earned their class wins. Ralf Lindlow scored the H Production win in the No. 53 Volkswagen Golf.

The final round of the SCCA Mid-States Conference Majors Tour continues from Heartland Park Topeka on Sunday morning, with the 21 lap races beginning at 9:30 a.m. Live notes and timing are available online at SCCA.com/SCCALive.

More information, including race results, can be found at SCCA.com/HPTMajors.

Back to the future: Newgarden wins in Formula F