SCCA is well-represented both on and off-track at this weekend’s Rolex 24 at Daytona.

TOPEKA, Kan. – With the start of the professional racing season just around the corner, SCCA is well-represented both on and off-track at this weekend’s Rolex 24 at Daytona.

This weekend’s Daytona race has special significance for SCCA racers after the announcement last fall that the 2015 SCCA National Championship Runoffs will take place on the same 12-turn, 3.56-mile circuit that hosts this weekend’s event. 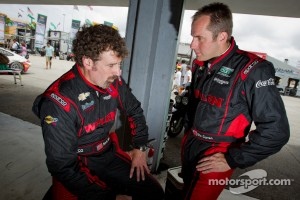 Many of those drivers looking to add a win at this weekend’s TUDOR United Sports Car Championship Rolex 24 or Continental Tire Sports Car Challenge BMW Performance 200 to their list of accomplishments have strong ties to the SafeRacer SCCA Club Racing program or an SCCA Pro Racing-sanctioned race series. However, the competitors are not the only Club members taking part in the endurance classic.

Over 100 corner marshals and other officials organized by the Central Florida Region SCCA will be up-close and personal to the on-track action. Like the drivers, crews and fans, they too will brave the elements and ward off the fatigue brought on by the twice around-the-clock challenge.

In total, more than 50 drivers that are slated to take to the track’s high banks have spent significant time with the Club. Household names like Randy Pobst and Graham Rahal look to add one more win at Daytona to an already impressive resume, which include gold medals at the SCCA National Championship Runoffs and, for Pobst, multiple Tire Rack SCCA Solo National Championships and SCCA Pro Racing Pirelli World Challenge titles.

Scott Sharp, Boris Said and teammate Eric Curran, Anthony Lazzaro and Scott Pruett are past SCCA Champions with a shot at the overall crown and a new watch in this weekend’s showcase event, while Brandon Davis, Andy Lally and Patrick Long fit the bill in the GT classes. If those names don’t capture your rooting favor, there are plenty of other drivers with SCCA ties to choose from.

The defending Touring 1 and GT-2 National Champion, Andrew Aquilante, will drive toward the front of Continental Tire pack in his Ford Mustang. Also in the field will be teenage sensations Trent Hindman and Dillon Machavern, both of whom are 2013 US Majors Tour Conference Champions.

While this list of drivers is not all-inclusive, it shows the impact that SCCA has had on the development of motorsports talent. Those skills are not limited to driving, but include the support staff required to safely run an event such at the Rolex 24.