Formula Lites is being created to give career-minded young drivers a place to begin their climb up the professional motorsports ladder.

CHARLOTTE, N.C. – SCCA Pro Racing announced that it has agreed to provide the sanction and race operations services for the new Formula Lites series, currently under development. The announcement was made Saturday afternoon at the North American Motorsports Expo in conjunction with the SCCA National Convention at the Charlotte Convention Center.

Formula Lites is being created to give career-minded young drivers a place to begin their climb up the professional motorsports ladder. The series plans on staging four races as early as September of this year, with plans for a complete schedule in 2015. 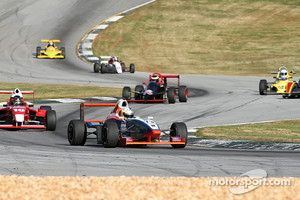 “SCCA Pro Racing has proved to be a place where rising and established driving talent has come together to compete on some of the best racing circuits North America has to offer,” Tom Campbell, president of SCCA Pro Racing, said. “Many of the people and companies involved in this project are the same that were involved in the highly successful Volkswagen Jetta TDI Cup. A renewed cooperative effort among our organizations for this new race series will be a welcomed addition to our portfolio.”

Dennis McCormack, a principal at the Formula Lites organization, reflected many of the comments made by Campbell.

“SCCA Pro Racing was a natural partner, having worked closely together with them in the Volkswagen Jetta TDI Cup program,” McCormack said. “They have a strong commitment and track record in driver development.”

The chassis for the news series, to be called the Crawford FL 15, has been under development by Dennis McCormack and Ryan Arciero since 2010 in conjunction with Max Crawford of Crawford Composites. The carbon-composite car has been designed and is being constructed to comply with the FIA F3 2014 specifications. A two-liter, turbocharged Volkswagen engine will power the new car, while Pirelli will supply the tires.

Features such as a full carbon composite monocoque, two-way adjustable shocks and a pneumatic paddle-shift sequential gearbox are just a few of the modern amenities that set the 1,150-pound car apart from other entry-level, open-wheeled racecars.

“I came from the karting world and went through what every karter experiences when they make the jump to that first step in motor racing,” Jan Heylen, former IndyCar and current TUSC GTD driver, said. “With the new technology and bigger expenses, it can be overwhelming.”

Aside from the jump in technology, the cost of racing when moving from karts to cars goes up significantly. With that in mind, those developing the new series are working to create a level playing field while keeping the financial expenditure required of a driver to a minimum.

“I believe that open-wheel racing at the entry-level in the United States has been starving for a car like this for a very long time,” Ryan Arciero, president of Arciero Sports and Arciero Miller Racing, said. “We now have a platform for a high-tech, state-of-the-art race car at a price point that makes sense for everyone.”

Details regarding the series - including schedules, detailed car specifications and costs associated with the series – will be announced in the coming months.