An early delay in on track action this morning limited run time for the Pirelli World Challenge competitors. In the 15-minute first practice session, O'Connell (Flowery Branch, Ga.) was the fastest around the 1.7-mile, 10-turn track that runs alongside Reliant Field, home to the Texans NFL team. He was able to post a time of 1:11.845.Pilgrim (Boca Raton, Fla.) was fourth with a time of 1:13.673. A near four hour delay followed the World Challenge practice which resulted in a new chicane being placed at end of the front straight to slow cars down over a severe bump in the track. This delay eliminated the World Challenge qualifying session. The grid for Sunday's race will be set by driver points, with Audi driver James Sofronas on pole. O'Connell is 21 points behind Sofronas and is in a must win situation to retain his driver's title. 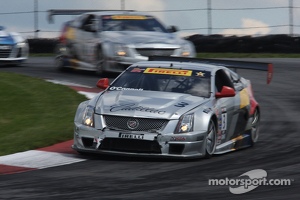 "We had 15 minutes of track time this morning," O'Connell said. "This track presents a difficult challenge, with the bumps and the limited track time. I am fortunate that I have run here before. The biggest challenge is to get a car dialed into run the race with so little track time. It would have been nice to have qualifying. I love to qualify. We made some changes to the car for the last practice that I wasn't too happy with tonight. I liked the car better in the morning. We are in a good position. I have to push hard and go for the win. I feel comfortable on the circuit. Once we get the car working I will be in good shape."

Audi has brought in factory driver Rene Rast to drive the No. 95 GMG Audi R8 LMS in the finale. Rast had the fast time in tonight's final practice session.

"Rast can affect the race a lot," O'Connell continued. "He is starting at the back of the GT grid, so he will have to work hard to get up to us. Getting there and getting by is two different things. I have to run my own race. I have to get a good start and get the lead and let things take care of themselves."

Pilgrim is disappointed with the amount of track time, but knows that these things can happen on a street course.

"It is not the first time we haven't qualified on a street course," Pilgrim said. "The organizers have a lot to do to get these tracks race ready. We have to be flexible, but it is frustrating. Johnny and I wanted to have a run at the pole. It would have been an important seven points to win the pole this weekend. As it is there is nothing we can do. It is an advantage for the guys who have been here before. With little track time, it is a big benefit if you've raced here in the past."

"It is going to be a traffic race," he continued. "It is going to take a lot of patience and making the moves when they present themselves. You can't be stupid and make a mistake, like clipping a wall. You can't afford to sit back you have to go. I think we are going to see the GTS slower cars by about lap five."