With more than 300 cars on the entry list for the Sports Car Club of America’s BFGoodrich Tires Atlanta Super Tour, close races were a lock. It happened, and what transpired on Saturday at Road Atlanta for Round Five of the Eastern Conference Majors Tour, in many classes, was the Club’s own version of March madness.

The first race of the day was highlighted by a cat and mouse game between two very different cars, repeated in two groups. 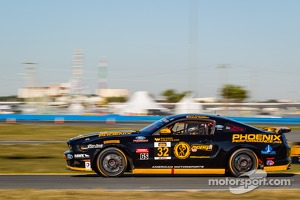 Kurt Rezzetano started his No. 36 Phoenix Performance/Ford Racing/Hoosier/Hawk Performance Ford Mustang on the pole, and pulled an early gap overall and in Touring 2 on the No. 02 Trianon/Fall-Line Porsche 997 of Andrew Longe. The two raced around the 2.540-mile circuit, approximately 20 seconds apart, with the Mustang in control of the early stages.

Likewise, the No. 04 Fall-Line Motorsports/Hoosier/Rytec Doors BMW M3 of Rob May played the leader role in Touring 3, setting the pace in front of the No. 07 HPD/BFGoodrich Tires/Hondata Acura TL of Luke Wilwert in the early stages.

Both class leaders worked through traffic on a very busy track. Any chance the two trailing cars would have had to prove their late-race superiority went out the window on lap 13 with just over 10 minutes to go. A turn-five incident involving four cars (Richard Baldwin’s Touring 3 No. 22 Zorro Racing/BMI/BFGoodrich Nissan 350Z, Greg Schermer’s Touring 2 No. 149 Posh Racing Porsche GT3, Amy Mills’ No. 14 Flatout Motorsports Mazda Miata and Joseph Guinta’s No. 163 Povoledo Track Day Mazda Miata) brought out a full course caution, ending the race under extended clean-up.

Each driver emerged from the incident without significant injuries, though the hairiest moment came when Baldwin’s Nissan clipped the mechanically slowed Porsche and barrel-rolled to a stop and was hit by Mills’ Miata.

The small formula cars came up next, with each of the class winners earning their trophies on Saturday. Tim Kautz’ No. 88 Braeburn/Two Dogg/Hoosier/Euroquipe Piper DF-3D Honda fell behind early in the Formula F battle and also trailed Clint McMahan’s No. 2 Satellite Racing Nova KBS-01 Formula 500 overall.

Kautz, making his first appearance since being presented with the Presidents’ Cup at the SCCA Convention, had the class lead by the completion of lap one, however, and a gaggle of Formula F machines trailed. In clean air, however, Kautz methodically stretched a gap until the checkered flag. McMahan lost touch with the overall leaders when he spun on lap nine, but stayed in front of the Formula 500 class to win.

The Formula Vee race had a running order that was mixed up every lap. Early, Steven Davis (No. 80 Hoosier/Butler Engines/Roxannes Headers Racer’s Wedge SB-1), Donnie Isley (No. 30 Agitator By Brookshire Agitator 016), and Jonathan Weisheit (No. 61 JK Technologies, LLC JK Technologies XP-1) each taking a turn at the front early on. Isley, unfortunately, pulled his car-camouflage wrapped to pit lane on turn 10, temporarily leaving Davis and Weisheit alone on the track.

If you weren’t closely, watching, however, you may not have noticed, as two laps later Isley’s sister car, piloted by Laura Hayes, appeared seemingly out of nowhere and moved right to the front of the field down the front straight. The addition of the No. 22 Protoform P2 made the battle up front three-deep again, and became four strong when Charlie Rogers caught up in his No. 23 Akula Motorsports Protoform P2.

Davis pulled off and out of the race just a handful of laps from the end, and Rogers fell back, leaving the last three laps the domain of Hayes and Weisheit. Weisheit saw the one to go board in front, but Hayes moved around in turn one. The pair danced through the turn 10 complex at the end of the backstraight side-by-side, but Hayes reappeared under the bridge in front and completed the final corner for the come from behind win.

The Spec Racer Ford race was a four car battle featuring four of the top SRF drivers in the country. Brian Schofield started up front in the No. 61 PM Racing SRF, but Trey Ayres’ No. 7 Ayres Racing SRF, John Greene’s No. 29 Jacky Jones Lincoln/PM Racing machine, and Franklin Futrelle’s No. 36 Comprent MotorSports/Futrelle Performance Coaching sled each took a turn at the front.

Not even a full course caution in the middle of the race could separate the group, as they once again pulled away at the green. Continuing to swap positions, Schofield was on the point with one lap to go. While the three behind fought for second through the turn 10 complex, Schofield turned a mistake-free lap and snuck away for a three-car-length win. Greene, Ayres and Futrelle followed at the finish line.

Doug Peterson’s No. 87 3Dimensional.com Chevrolet Corvette ran away with the GT-1 race, and it looked like another Peterson – Pete, in this case – was ready to take the GT-2 class win. When his No. 98 Toyota/ Valvoline/Goodyear Toyota Celica slowed and pulled to pit lane coming to the one to go board, however, the looming battle between Tom Patton’s No. 50 Redline Oil/Hoosier Tire Sunbeam Tiger and Randy Kinsland’s No. 4 Crossroads Motorsports Chevrolet Corvette became a duel for the lead.

Kinsland slammed the door on Patton’s run into turn 10a, and then got the run out of 10b to hold on at the finish.

That close finish set-up Spec Miata, next on track, and the three-wide finish looked like jets in formation as just a half-second separated the winner from fifth place at the checkered flag.

The early stages of the Spec Miata race featured two distinct drafting packs of four that became an eight-deep line by lap five. Alex Bolanos and Jim Drago drove the No. 57 Autotechnik/Rossini Engines Miata and the No. 2 East Street Racing Miata, respectively, to a lock-step breakaway through the midpoint. Pushing hard behind, Andrew Carbonell’s No. 43 BSI Racing Mazda Miata and Dillon Machavern’s No. 24 Heritage/Panic/T-Speed Mazda teamed up to turn the fastest laps of the race, marching down Drago and Bolanos by lap 10.

Carbonell was the official leader as the pack of four started lap 14 with six minutes to go. With just a couple to go, Drago made his move – and it backfired. Drago went to the lead in turn seven, but then was freight trained by the other three leaders and fell all the way back to fourth after controlling most of the race. With that excursion, Todd Lamb’s No. 84 Cahall/Driver Coach/Hawk Performance Miata joined the battle, and the five crossed the stripe to start the last lap all in a row and Carbonell up front.

Bolanos took the lead early in the lap, and on the big run into turn 10, held on while Machavern moved to second. The group came down the hill and through the last turn looking for real estate, and at the finish it was Bolanos on the left, Machavern on the right by 0.120-second, and Carbonell, Drago and Lamb in order for the finish.

A black flag to retrieve a crashed Formula Atlantic stalled out their race, but even with a three lap restart no one was close to eventual class and overall winner Michael Mallinen. Mallinen’s No. 1 Swan Motorsports/MAZDASPEED Motorsports Development Swift 016a/Mazda ran away from the field and took first going away. Newly inducted SCCA Hall of Famer Jim Downing showed his career isn’t yet finished, taking the Prototype 1 win in the No. 63 Downing Atlanta Inc Peach/Mazda.

Glen Cooper moved his No. 43 Ralph Firman Racing/Hoosier Tires/HorseLoversGifts.com RFR F1000 around Jason Slahor’s No. 19 Slahor Racing Van Diemen RF98 on the restart, and when Slahor spun while chasing Cooper on the final lap, Cooper took home the Formula 1000 victory.

In a story that’s been told before, Scott Rettich drove his No. 17 Alliance Autosport/PDI Communications Formula Enterprises/Ford to a runaway win on Saturday. The group battle to watch was in Formula Continental, where Chuck Moran held an early lead in his No. 45 Van Diemen RF99. Thomas McGregor chased Moran through the early stages, and on lap 15 pulled his No. 93 Honda/Dairy Queen/Sparco Spectrum 014Z alongside Moran up the front straight.

Moran held the lead through turn one, but a lap later McGregor had the run into turn 10 and the lead. Though Moran filled his mirrors to the finish, McGregor kept in front to the checkered flag.

The day ended with a Jim Daniels walkaway in E Production, but each of the other three classes provided some excitement.

The F Production battle saw Don Ahrens’ No. 61 AhrensAuto.com/Mazda/Hoosier Mazda Miata in front early, chased by Ken Kannard’s No. 51 Northwest Cable/Hoosier/Mazda/OPM Mazda Miata. Patrick Crider’s No. 89 Hoosier Tire/Jesse Prather Motorsports/Ducommun Mazda Miata joined that battle, and the three ran nose-to-tail for the lead. Ahrens started to fall off on lap six, and Kannard pulled out some breathing room, but was pushed to the finish knowing Crider remained just a few seconds behind.

Michael Miller turned his fastest H Production laps of the weekend at the end of today’s race, moving his No. 64 SportsCarSalvage/AppRaceTire/Comptune Austin Healy Sprite from well behind Andrew Wright’s No. 07 Hoosier/RedLine/East Tennessee Race Prep Triumph Spitfire to the lead on lap 16 to take the lead and, eventually, the win.

The GT-Lite showdown was the one to watch for the duration of the race, as Peter Shadowen’s No. 72 Road N Race Automotive/Flat Top Brewing Company Honda CRX Si and Bobby Lentz’s No. 60 Nissan Sentra battled all race long in a tooth and nail race.

Shadowen started on pole and led the opening three laps, with the pair running side by side on a number of occasions. Lentz took the lead on lap five, but the gap fluctuated as the pair ran through traffic – both from slower cars and faster cars. Shadowen kept the pressure on Lentz until lap 12, when the No. 72 spun through turn three and came to a stop. Without a threat, Lentz rolled to the finish and a 10-second win.