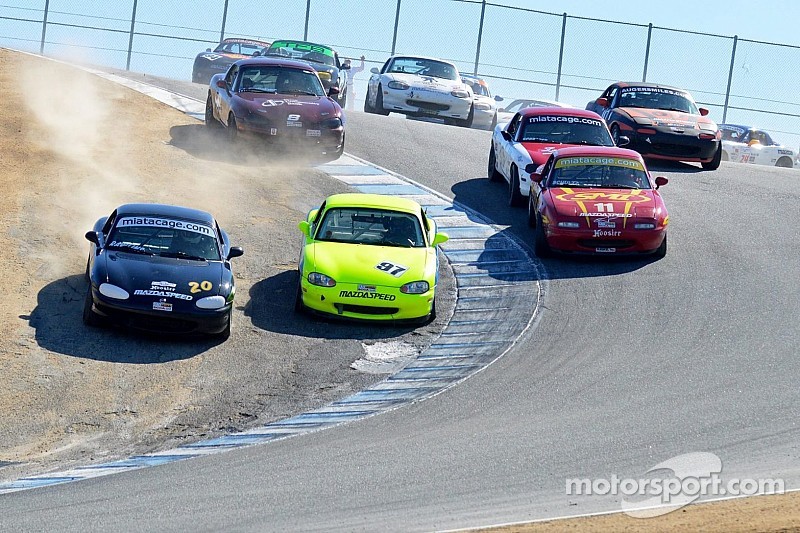 The SCCA Runoffs were a bit wild this weekend, as the above photo from Advanced Autosports shows.

The SCCA Runoffs, as always, put on a great show for fans at Mazda Raceway Laguna Seca. There was just one problem with the spec Miata class. The cars that finished first, second, third, fourth, fifth, and sixth weren't quite spec Miatas.

Nine cars in total were investigated with the seventh place finisher being the highest placing car found not to be in violation of any rules. Those ahead of him all tampered with the engine heads, making illegal modifications that gave them an edge over the competition ... Well, the small handful that didn't make the same modifications.

It's your lucky day Erik Stearns

Erik Stearns is the name of the driver who finished seventh and via a rather bizarre chain of events, he is now the 2014 Spec Miata National Champion. This is an unprecedented outcome in 51 years of this event.

"What happened this week, with so many cars being non-compliant, is unfortunate. We need to ensure that this moment is a trigger for a positive change in this class,” said SCCA President Lisa Noble.

The rule in question is, well, being questioned

However, it's no so cut and dry to say that the offenders actually cheated.

The rule in question states, "No aluminum in the bowl area (other than that specified for the plunge cut) or the ports may be removed, added, or manipulated for any reason. No material may be removed or added from the short turn radius in the port."

Teams are allowed to plunge cut the heads if they so choose. This cut can't go further than 12mm below the valve seat and can't be wider than 1.178 inches. As long as they comply with these black and white guidelines, a plunge cut may be performed. The rule is very open in terms of how the cut is actually done though. The powers that be only care that it complies with the aforementioned regulations.

As previously stated, the short turn radius in the port can't be manipulated in any way, but one reprimanded racer (Jim Drago) claims that it is impossible to perform a successful plunge cut without violating that very rule, saying on a forum, "it's impossible to make a plunge cut without taking material off of the short side radius." He believes that Mark Drennan is the true champion.

So according to Mr. Drago, although it is permissible to make a plunge cut in the throat area of the port, it is not possible to do so without modifying the short side radius in the process. If that is indeed true, then the rules basically contradict themselves.