The Team Cadillac drivers have had to adjust their CTS-Vs to a SCCA mandated increased engine restriction since the last round at Toronto. The reduced horsepower of the Cadillac 6.2-liter engine has put an emphasis on handling around the 2.2-mile, 13-turn natural terrain Mid-Ohio Sports Car Course.

Team Cadillac temp Taylor is getting to grips with the ABS braking system in the CTS-V. 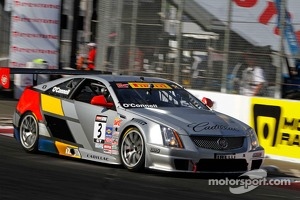 "Practice was good yesterday and this morning," Taylor said. "The car was fast right out of the trailer. It takes a little time to get used to the Cadillac again, especially the ABS braking in these cars. It took me about an hour of practice to get used to the ABS. Once you get accustomed to it, it is a very nice tool to have. We've made some minor changes to the car. I have been in the top five each session and qualified third today, so that is a testament to this team's ability to put a set-up on the Cadillac that works for the new guy. The Volvos are fast here as they were last year. The CTS-V has come a long way since I drove it last year. The team has done their homework."

Compared to last year Team Cadillac has made a lot of improvement on the car for Mid-Ohio," O'Connell said. "They do a good job moving the program forward. I have a good car. We have the possibility of rain tomorrow. That will definitely favor the already very good Volvo at this track even more. Team Cadillac has improved the overall package, so we will be right there as well. The Volvos will probably lead early and then come back to us. The first time I won here I was running in third going into the last lap and ended up winning the race. Anything can happen."

Pilgrim has been chasing the set-up of his CTS-V.

"We started the weekend really well," Pilgrim said. "I thought the car was really good. We thought the rain would have changed the track the more than it did today. I think we missed it a little bit for qualifying. The car was sliding around, lacking grip. I had a lot of slide in the front. It wasn't turning in quite like I wanted.

So we will review the data and make a few changes for the race tomorrow."

The first of two 50-minute Pirelli World Challenge Races will go off tomorrow at 11:40 a.m. with the second taking the standing start at 1:35 p.m. on Sunday.