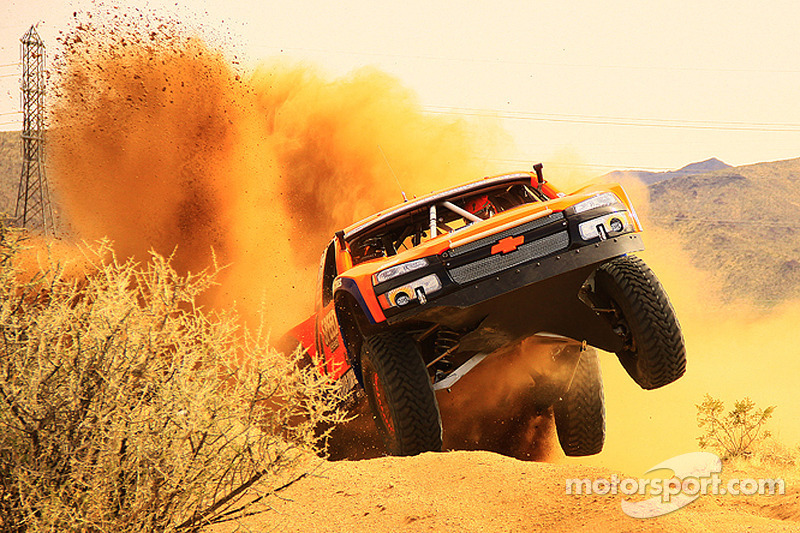 ENSENADA, Mexico—Defending race champion Robby Gordon, Charlotte, N.C., returned to his desert-racing roots posting the fastest qualifying time Thursday to earn the first starting position in Saturday’s 46th annual Tecate SCORE Baja 500 desert race. Entries from around the world are officially entered in Round 3 of the 2014 SCORE World Desert Championship, being held this week in Mexico’s Baja California Norte, starting and finishing in Ensenada, the seaside port on the Pacific Ocean, 86 miles south of San Diego.

Driving his durable and dependable No. 77 Speed Energy Chevy CK1500, Gordon, who will race in the XGames in Austin, Texas on Sunday in his Formula Off-Road truck series, covered the 4.3-mile desert test course near Ojos Negros 40 miles east of Ensenada in five minutes, 8.74 seconds, averaging 50.14 miles per hour.

SCORE is celebrating its 41st year as the world’s foremost desert racing organization in 2014 and this is an elapsed-time race with staggered starts as the green flag on Saturday will drop first for the motorcycles and ATVs at 5:45 a.m. and approximately 10 a.m. for the cars, trucks and UTVs. All vehicles will have 18-hour time limits to be an official finisher.

With nearly 225 entries competing in 26 Pro and 5 Sportsman classes for cars, trucks, UTVs, motorcycles and ATVs expected at the start line on Saturday, entries to date have come from 20 U.S. States along with Austria, Belgium, Canada, Denmark, Ecuador, France, Germany, Great Britain, Guatemala, Italy, Japan, Mexico, the Netherlands and Spain. Late entries will be accepted at late, on-site registration through 5 p.m. Friday.

The race will be televised on a delayed basis in the USA, Canada and U.S. Territories as a one-hour special on the CBS Sports Network. The show, being produced by SoCal’s acclaimed BCII TV, will air for one week on the CBS Sports Spectacular show with the initial airing at 9 p.m. ET on Sunday, July 20, 2014. Following a week of airing the CBS Sports Network telecasts, the Tecate SCORE Baja 500 show will air worldwide in over 100 countries through international distribution.

With viewers in over 100 countries, SCORE Dirt LiveHD will present live internet streaming from the event from pre-green to post-checker. Coverage will include live start and finish line interviews as well as live coverage from the many ancillary events tied to the race. On race day, live satellite tracking of all vehicles in the race will also be broadcast through the SCORE International website.

Colorful race week festivities include several first-time events for SCORE, starting with the qualifying session for SCORE Trophy Truck and Class 1 followed by the Monster Energy SCORE Kick Off Party last night at the start/finish line area in the heart of Ensenada. With donations for La Cruz Roja Mexicana (Mexico’s Red Cross), the event included a racer’s autograph party and vehicle display

Friday will see the day-long, pre-race Manufacturer’s Midway and contingency festival in the start finish line area in Ensenada.

On Friday evening, the Monster Energy Papas Y Beer SCORE Street Party will be held from 7 p.m. to Midnight on Avenida Ruiz in downtown Ensenada.

During the race on Saturday the Monster Energy SCORE VIP hospitality area, will be part of the start/finish line compound. The area will also include the massive SCOREvision LED screen broadcasting race festivities along with start and finish line interviews.

All of the week’s festivities will be aired both live and same-day including the race, on the SCORE Dirt LiveHD race week shows, airing via the internet on the SCORE website.

Second-fastest qualifier was Las Vegas’ Bryce Menzies in the No. 70 Ford F-150 in 5:13.42, just under five seconds behind leader Gordon. Third was Jason Voss, Cupertino, Calif., who was second in qualifying last year behind Gordon, with a time of 5:17:11 in another Ford F-150 while fourth was Las Vegas’ Rob MacCachren in 5:21.74 in yet another Ford F-150. Completing the top five fastest qualifiers for Saturday’s race was Clyde Stacy, Bristol, Va. in the No. 5 Chevy Rally Truck with a time of 5:22.56.