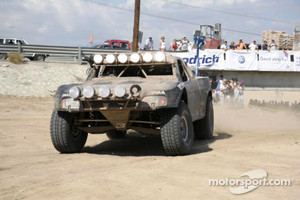 SAN FELIPE, Mexico--Racers always seem to return to places of past success and this weekend's 25th Annual MasterCraft Safety Tecate SCORE San Felipe 250 will certainly be no exception as 74 desert racers who have combined for 177 class wins are all part of the ferocious field of nearly 250 entries in this popular spring race on Mexico's majestic Baja California peninsula.

Attracting entries from 22 states and nine countries, the lineup includes 28 entries in SCORE Trophy-Truck, the marquee racing division for hi-tech, 850-horsepower unlimited production trucks. Round 2 of the 2011 SCORE Desert Series will be held this weekend in Mexico's picturesque fishing village of San Felipe, located 120 miles south of the U.S. border on the East side of the Baja California peninsula along the azure waters of the tranquil Sea of Cortez.

With nearly 250 entries expected in the Silver Anniversary of this event, competition will be held in 28 Pro and 6 Sportsman classes in the 252.09-mile race. The green flag will drop at 6 a.m. Pacific Standard Time next Saturday, for the motorcycle and ATV classes, followed three hours later by the car and truck classes at approximately 10 a.m. local time. The start and finish line for the race will once again be the landmark San Felipe Arches on Highway 5 on the outskirts of San Felipe. One vehicle will start every 30 seconds in the elapsed-time race, with an 11-hour time limit to become an official finisher. The fastest finishers are expected to complete the course in about four and one half hours.

San Felipe has really been good to me but at the same time it is pretty rough.

As part of the festivities of the Silver Anniversary of the popular SCORE 'spring-break' race, SCORE has made it a memorial race to honor long-time SCORE Mexican liaison Jose 'Pepe' Limon, who passed away last November at age 73.

The field includes racers from the last 13 overall motorcycle winners as well as 10 of the previous overall 4-wheel vehicle winners. Also entered are 22 class winners from last year's race and 25 of the 2010 SCORE Desert Series season class point champions.

SCORE Trophy-Trucks have won 14 overalls in San Felipe in their 17-year history.

In the first 24 years of this race, Honda has earned 15 overall motorcycle victories (including the last five years straight and 13 of the last 14 years), Kawasaki has six, KTM has two and Husqvarna has one.

The pre-race Manufacturer's Midway and tech inspection of the vehicles in the race will be held on Friday, March 11 from 10 a.m. to 6 p.m. on the picturesque Malecon, flanked by the Sea of Cortez on one side and the popular restaurants and night clubs of San Felipe on the other.

Racer registration will be held Thursday from and Friday from 9 a.m. to 5 p.m. each day at Bandidos Cantina. The awards celebration is scheduled for Sunday, March 13 (PDT) at 10 a.m. at the Plaza on the Malecon.

This year's race will use a course of 252.09 miles that is very similar to the past two years with a few modifications beyond those caused by normal weather conditions. Running in a counter clockwise direction out of San Felipe up to and then parallel to Highway 3 (south side) and then south back down through three of the most picturesque and challenging washes in all of Baja.

After the start at the landmark San Felipe Arches, the race will proceed north and then Northwest and then south to the entrance of majestic Matomi Wash. After Matomi, the challenging course will run through two more of the infamous Baja canyons--Huatomote and Chanate before heading back Northwest for the final sprint to the finish line. 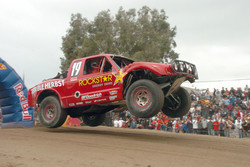 "I've concentrated much harder in the last 10 years than I did in the first 20 years," said Jim O'Neal, who also has amassed 15 season championships in the SCORE Desert Series. "I just got more serious about it after I had enough seconds, thirds and fourths.

"San Felipe has really been good to me but at the same time it is pretty rough. If I were to choose to solo a race, I'd probably rather solo the Tecate SCORE Baja 500 than the 250 -- this race is that rough. You've got a lot of stuff out there to contend with...but it seems like it suits my riding style just a bit better."

O'Neal, the founder and president of O'Neal Distributing Inc., is quick to point out that his class wins in San Felipe and his season championships are the result of meticulous preparation, great equipment and -- more importantly, he stressed -- good teamwork.

"Just because my name is on the entry doesn't mean that much," he said. "I did not get one win by myself. I never soloed once; it's a team deal."

O'Neal, who was sidelined for six weeks earlier this year while battling pneumonia, will attempt to defend his title in Class 50 this weekend. He also will ride with Donald Lewis in Class 60 in an attempt to notch his third career multiple-win race in San Felipe.

Desert racers Nick Vanderwey of Arizona and Chad Thornton of New Mexico received the pole positions for four-wheel and two-wheel vehicles in the computerized drawing for starting positions held Feb. 12. Vanderwey races in the featured SCORE Trophy-Truck division while Thornton competes in Class 22 for open motorcycles. 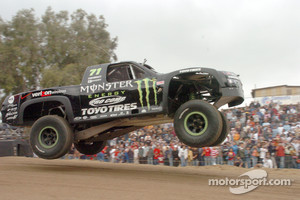 NASCAR Cup team owner/driver Robby Gordon, the 2009 SCORE Overall and SCORE Trophy-Truck season point champion who has finished second in San Felipe the last two years straight in the No. 77 Team Gordon Chevy CK1500, is taking his 'spring break' from his day job as a NASCAR Cup team owner/driver as NASCAR is off this week. Normally, he has to pull double duty with SCORE and NASCAR. Gordon has two class wins in this race and will start ninth on Saturday.

Internet coverage, with photos, text, audio and video, can be found on Friday and Saturday through www.SCORE-international.com, www.DirtNewz.com along with Race-Dezert.com, and live vehicle tracking on Saturday at www.racetheworld.net.

To date, SCORE Trophy-Truck had the most entries with 28, followed by the unlimited Class 1 with 21, SCORE Lite with 16 and Class 1-2/1600 with 13. While 221 official entries have been received as of today, late registration will be accepted up until race morning and as many as 30 additional entries are anticipated.

Among the Pro motorcycle classes, the open Class 22 and age group Class 30 have the most vehicles entered so far with eight each. Leading the Pro ATV classes so far is Class 24 with 16 entries.

Leading the Sportsman classes is SPT M/C 450> with 16 entries to date.

This race began in 1982 and was not held between 1985 and 1989, the first five years of the seven-year combined High Desert Racing Association-HDRA/SCORE Desert Series of US and Baja races. It has been held consecutively each year since 1990.

In its first 24 years, the race was held in San Felipe all but 2007 when political issues forced a last minute move by SCORE, starting it in Ensenada and finishing it in Santo Tomas. Ironically, 2007 saw a race-record 394 starters and a race record 288 finishers even though the race was moved and the course changed just 10 days before the event. The records when the race actually started and finished in San Felipe are 341 for starters in 2006 and 220 for finishers, also in 2006.

In addition to season class point championships, the racers are also competing for part of the nearly $400,000 in cash purse and contingency postings in this event. Drivers in the Pro car and truck classes are also attempting to earn prestigious SCORE Toyota Milestone Awards given to drivers who complete every required mile of the five-race season. Being presented by Toyota Motorsports for the 26th consecutive year, a total of 72 drivers remain eligible after Round 1 of the 2011 SCORE Desert Series. Racers are also competing for the annual SCORE Off-Roadsman of the Year awards, including the MasterCraft Safety SCORE Rookie of the Year award, which includes a $2,000 MasterCraft bonus.