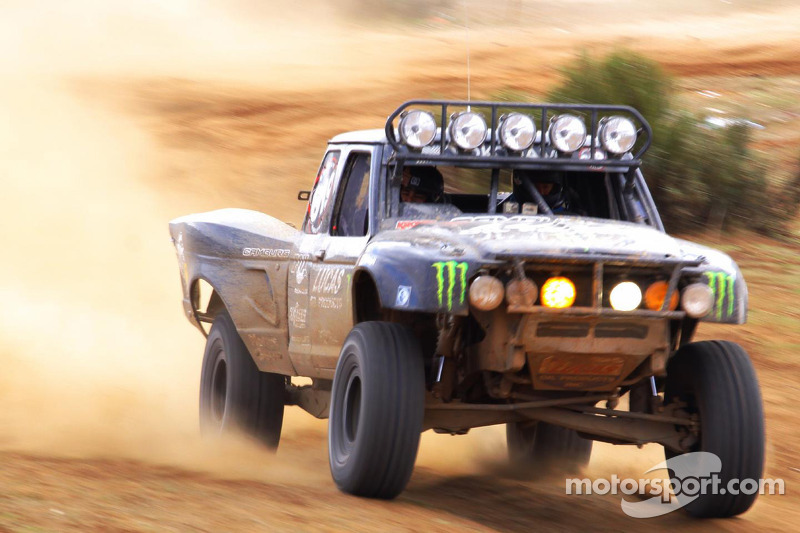 With the practiced routes and pacenotes it's a little like the WRC, with the incredible distance and hardcore terrain it's similar in some ways to the Dakar and with the midnight pitstops and driver changes it has something of Le Mans about it. But 750 miles through the Mexican mountains and deserts in 850bhp spaceframe trucks that fly... it can only be the Baja 1000!

Now in it's 44th year this legendary event has a rich history all of it s own and 2011 saw 278 vehicles line up for the start in Ensenada, each crew hoping to add something to the illustrious hall of fame... or just to make it around the mammoth and brutal course within the 32 hour time limit.

There were no press cars for foreign journalists and the guys that signed me in openly laughed at me for asking, so I had to walk around the hotel car parks looking for a team with a spare place... and that's when I came across Big Daddy who shook my hand and said, “Don't worry, I'll sort you out!” and took me to meet the Desert Assassin team. 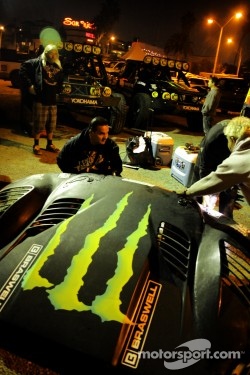 To give the back marker bikes and ATV riders half a chance to get over the first mountain range and be in the plains on the other side before the Trophy Trucks come baring down on them, there was a four hour wait between the last two-wheeler off the line and the first one with four. For me such concerns for rider's safety translated into a leisurely breakfast consisting of unlimited coffee and cactus and a chance to meet the team. Two huge half a million dollar Trophy Trucks were having a few finishing touches done to them, the Monster Energy Drinks bright green claw marks on the bonnet. Big Daddy introduced me to Rick Gieser, builder of the brutish pieces of automotive art. “Are you hoping to win?” I asked. “You know, there's just so much between here and the finish line,” he said. “But we should be there or there abouts.”

The Baja 1000 is undoubtedly a stand-alone event but it is also the final round of the SCORE championship and the Class 6 Production Mini Truck class was being led by Desert Assassin's Heidi Steele in the number 619 Ford Ranger. Mini is a perhaps a bit of a misnomer that puts you in mind of something the size of an ATV, but the truck is just 6 inches thinner than a gull bodied Trophy Truck and a little shorter. Also it has a V6 instead of a V8, but it can still pump out some 500bhp!! Believe me, it's still a proper beast! “The numbers are actually pretty simple,” she explained. “If Marc Burnett beats us we have to be in the place right behind him.”

But Heidi didn't really come her to race... and for good reason. She's pregnant enough not to be able to fit into her racing suit any more and so she was behind the wheel for only a nominal few meters over the start line to get her name on the results list before handing over to the friendly Rene Brugger. At first having three drivers and two co-drivers in one car seemed very odd but as Rene's wife, the constantly chuckling Patty drove the chase truck through the mountains and pointed out the track below I came to understand why. It was a rock strewn riverbed cut with deep channels where the river had cut and then it wound up hugging the side of a cactus covered mountain... it would be physically impossible to drive at maximum attack for the full 700 miles! 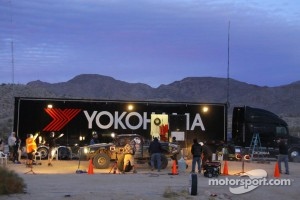 The first place we stopped was an innocuous looking series of jumps, or whoops as the Americans call them, but the rushed drive was for nothing as the start was delayed for an hour and a half. Many rumours and half truths filtered through; a truck had crashed in the center of Ensenada and the ambulances are blocking the road... all the Trophy Trucks had got stuck in a large puddle of mud. Yet what really happened wasn't any less strange, a lorry in a construction site the route passed through had jack-knifed and rolled over blocking the road. But then eventually the helicopters buzzed over the horizon and the locals stopped playing on the road... and went to stand in it instead... and Jesse James came bowling over the crests at absolute full tilt with no regard for saving the car for the 670 miles still to come! Starting at 30 second intervals it was constant action, especially when Troy Herbst span and tipped over. There certainly wasn't a shortage of willing hands to help push, but it took another pick up with a rope to pull him back on his wheels.

The next point was at a deep gully that cut across the track and dozens of Mexican families had set up camp there drinking beer and making enchiladas. Most of the crews had spent the weeks leading up to the event making notes and GPS warnings of the biggest obstacles so everyone knew that there was a 3 foot drop in the middle of the road. Some slowed down, others... well, they certainly knew what their suspension was capable of! 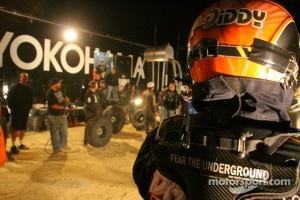 And then just before 5pm the sun started to go down and another element of this event showed itself. If the rough terrain and sheer distance isn't enough, then more than two-thirds of the course is run in the darkness. “This loop that they're heading out on now on its own is one of the races in the championship, the San Felipe 250,” said one of the crew. “And it's so rough and hard out there that we blew up one of those massive King shock absorbers! There was blue flame coming out of the top! And now they're doing it at night! There are holes out there that you could park a car in and they are comin' at them at 80, even 100 miles an hour! It's absolutely insane! But that's why we love it!”

Where the 250 mile loop came around to cross the track again was where the pit area had been set up. Large service trucks, food stands and flood lights lined the track as cars pulled over for dust covered and sweat stained crews to scramble out and the next ones to take over, while the mechanics re-fuelled and changed tyres.

Before the big service the 619 was doing well, just a few minutes off the leaders, but then disaster struck; the gearbox broke. “We had to change it out on the course,” Rene told me. “We started disconnecting it while the mechanics with the replacement and proper tools were out on the way. We lost a lot of time, but you know, the thing is here, it's so far to go that anything can still happen...” And it did. Just a few miles before they got back to service they ran out of fuel causing a mad scramble of activity as the mechanics loaded a chase truck and had to navigate with GPS cross the open desert to find them.

“It's a little hard to just watch,” Heidi said a little nervously. “But I trust the guys and nothing is lost until we get to the finish!” 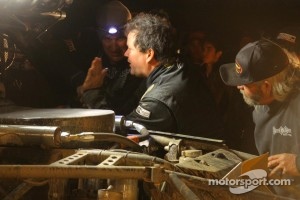 There was no live timing that any one had access to, no results being posted and one of the guys in the team had the job of standing by the road jotting down the numbers of the cars that flashed by in the glow of the flood light, pen in one hand and stop watch in the other. The two Trophy Trucks in the team driven by Cameron Steele and Rick Geiser were both doing well, just a couple of minutes off the leaders, but then Rick's diff went in a very remote place and they lost nearly 4 hours while the service team struggled to get to them. Then Cameron in the number 16 lost his breaks. “I kind of modified the driving style to get round it,” he said to the mechanics. “Well, what I mean is that I just didn't slow down for anything!” The clock ticked painfully slowly as the mechanics tried to find the cause of the problem. They bled the brakes but that didn't work, so they ended up having to change the master cylinder. “The brake system on this truck cost $40,000,” Big Daddy said. “And it was a 50 cent C-clip that failed.” It cost 45 minutes and any chance of a good result.

And there was a lull as we waited for the 619 truck to complete the loop. It was too cold to sit in the wind outside so I found a place in the back of the Yokohama truck... on top of a fridge that I managed to drape myself over for a few hours... but come the dawn and Patty was handing out bacon butties. The truck came in with its front wheels splayed like something was getting loose in the suspension, but Rene was back behind the wheel with his son Richie and as they started the engine Burnett went past! He'd had his own problems and now there was only 30 seconds in it! 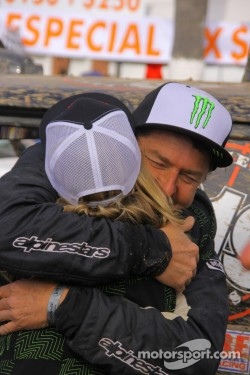 Rene Brugger and Heidi Steele at the finish

We packed the tools away and raced off but then over the radio we got the message that the oil pressure was getting a bit low... so we made another detour to meet them and waited while a few very tired looking trucks and buggies went by and then just behind Burnett's dust trail came Rene. Hood off, mechanics throwing themselves across the engine bay, hood back on, and it was all done... except the starter motor was making terrible noises. Unrepeatable curses were shouted into the fresh morning air and a few guys dived underneath to contort themselves into odd positions to rip the old starter motor motor out and install the new one. The stress levels weren't helped by the fact that no one else knew where the next guy in the class was, one car with a number starting with a 6 would mean that the championship was gone... and as we stood waiting in silence we could feel it slipping away. 45 minutes is a long time to be parked by the side of the road... but no one else came and Rene blasted off again and we drove back to Ensenada listening to Richie giving updates, “680, all is good. 685, we're OK.”

We got to the finish line in town at the exact same moment Rene passed under the Red Bull arch. He got a big cheer but Cameroon was pushing his way through the crowd to give wife Heidi a hug. “I'm just so happy for the team,” she said but then she was lost in a swirl of black shirts all wanting to give their congratulations. On the front of each T-shirt was a picture of Jeff 'Ox' Karbola. I never got to meet him, but I am sure he'd be proud of his friends.

My heartfelt gratitude for being part of this fantastic experience goes to Big Daddy and Patty and the whole of the Desert Assassins and to Nancy and David at Motorsport.com for getting me into the Baja in the first place.

Now it's back to America, then China and on to Malaysia for the Rainforest Challenge. Just a pity I am missing the very special Sarah Sukerman so much! 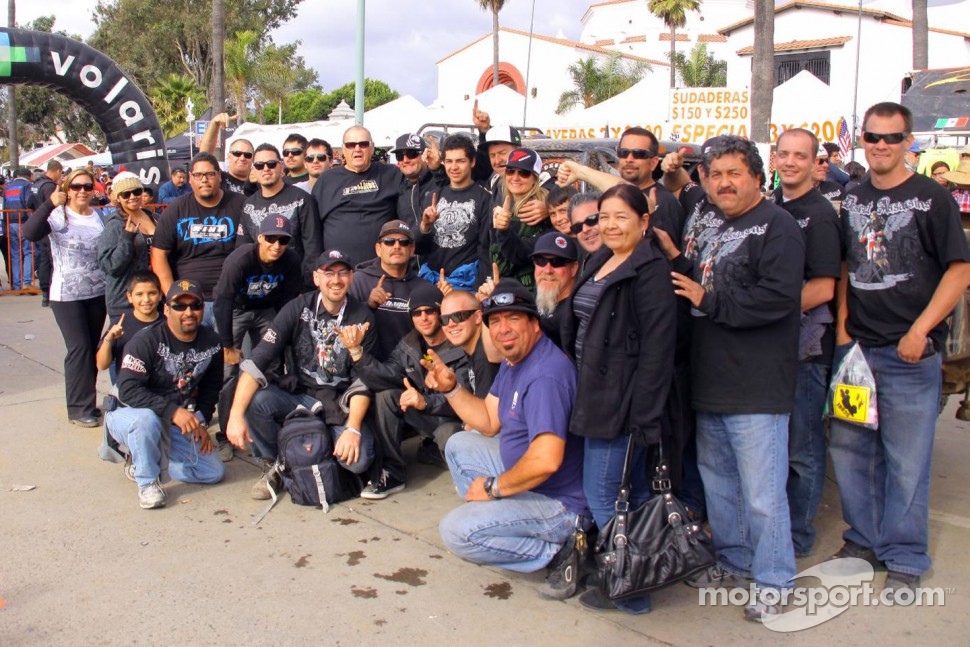