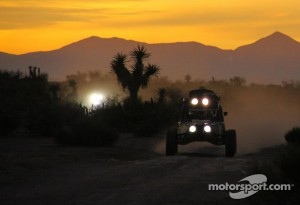 IRVINE, Calif.—BFGoodrich Tires, Honda and racer Bryce Menzies and team owner/rider Johnny Campbell were all big winners Saturday as SCORE International officially concluded the five-race 2011 SCORE Desert Series with the annual SCORE Awards Night in SoCal at the Atrium Hotel in Irvine. Among the others earning SCORE Off-Roadsman of the Year awards were, Geiser Brothers, Baja Pits and Jeff Geiser.

In front of a festive holiday standing-room-only crowd of nearly 400, the evening was also a celebration of 38 years of SCORE championship desert racing. While saluting the stars of the 2011 SCORE Desert Series, SCORE President/CEO Sal Fish also previewed the 45th anniversary of the legendary Tecate SCORE Baja 1000 that will be a challenging run next November down Mexico’s majestic Baja California peninsula starting in Ensenada, Baja California Norte and finishing in La Paz in Baja California Sur.

The SCORE Off-Roadsman awards were determined for the first time by a public, online vote for the organization based in Los Angeles. Among the other honorees were the top point leaders from the 2011 SCORE Desert Series, the World’s Foremost Desert Racing Series. Several thousand votes were cast in the week-long voting window in late November following the season-ending 44th Tecate SCORE Baja 1000.

Menzies, of Las Vegas, was voted as the 2011 MasterCraft Safety SCORE Rookie of the Year after winning the marquee SCORE Trophy Truck division with two win and four podium finishes in five races in the No. 70 Menzies Motorsports Ford F-150.

Campbell, of San Clemente, Calif., who owns and rides part-time for the prominent JCR Honda racing team and is an 11-time overall motorcycle winner of the Tecate SCORE Baja 1000 was honored for the first time as the SCORE Person of the Year.

“What Bryce Menzies accomplished this year, his first full season in the SCORE Desert Series, winning the SCORE overall point championship and the SCORE Trophy Truck title while competing against the world’s best desert racers was nothing less than phenomenal and honoring Johnny Campbell in this way is a very well-earned award for all he means and hast meant to this sport, especially on the motorcycle side,” commented SCORE’s Sal Fish.

American Honda was voted SCORE Motorcycle Manufacturer of the Year for the 24th time and the 15th consecutive year.

Jeff Geiser, recognized along with his brother Rick and the entire Geiser Bros shop in Phoenix, as the top SCORE Trophy Truck builders in the world, was selected the SCORE Mechanic of the Year for the first time. Rick Geiser received this honor both in 2006 and 2010..

“BFGoodrich Tires has been supporting all of desert racing, especially SCORE, for 36 years,” said Fish, “To win the Tecate SCORE Baja 1000 once is a major feat, but to capture the world’s most prestigious desert race 20 straight years (1986-2005) and 25 times all together is unbelievable. BFG Tires are the most dominant desert racing tires in the world and we are privileged to be able honor them. They have also started a new streak currently with five consecutive Tecate SCORE Baja 1000 overall victories. BFG’s grassroots support of desert racers is unparalleled. SCORE is deeply humbled to have the relationship with BFG Tires that we have had for over three and a half decades. No motorsport has a more involved nor a more committed sponsor and contingency donor than we have in BFG Tires.”

Mike Julson, of Santee, Calif., who is a SCORE regular co-driver in both SCORE Trophy Truck and the unlimited Class 1, saw his Jimco open-wheel desert race cars win the 2011 SCORE Original Buggy Chassis Manufacturer point championship for the 18th time and 17th straight.

A rugged group of 21 SCORE racers were also honored as 2011 SCORE Toyota Milestone Award winners after finishing all 1,762.02 race miles during the season. Joining Fish in presenting the prestigious awards was Les Unger, Toyota’s National Motorsports manager. It the 26th consecutive year that Toyota has presented this unique awards.

Baja Pits was honored for the second time in the last three years as the SCORE Pit Support Team of the Year.

SCORE opens its five-race 2012 SCORE Desert Series Jan. 13-15 in Southern Nevada with the first two round of the season at the 18th Annual SCORE Laughlin Desert Challenge.

More from
Mike Johnson
IMSA Others