In 2010 Craig Dolby, driving the Tottenham Hotspur car, finished the Superleague Formula Championship in runner-up spot, just two agonizing points adrift of series Champion Davide Rigon. We spoke to him about last year and his hopes for 2011.

1. What were the highlights for you of the 2010 Superleague Formula season? 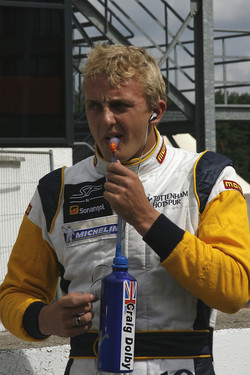 The highlights of 2010 was winning the first round and also winning the Beijing round, although sadly that did not count for points. If it had...

I have to say that my favorite track in 2010 was probably the Beijing Street Circuit. I had never driven on a street track before and it was cool.

3. What are the Superleague Formula cars like to drive as race cars?

The Superleague Formula cars are great fun to drive, they are quite heavy but with a lots and lots of power, so they can move around a lot which is great for the drivers and it gives us exciting racing which is also great for the fans.

4. What did you do over the winter break to (a) relax, and (b) to prepare for the new season?

What winter break! I carried on training and pushing hard for 2011, I want to be in the best condition that I can be in. I spent Christmas with my family and then flew to Spain on boxing day and spent some time out there over new year. I spent a week in Dubai which was also very cool. But now it's all training again.

I have one goal for 2011 and that is to be on that top step of the podium at the end of the season.

In 2010 I think the biggest rivals were most of the field, there are a lot of strong drivers in the championship, and all of the cars are very equal in performance, I think Yelmer, Max, Chris and Davide, we all had a good years, well at least before Chris went with the flying lessons! Seriously it is great to see him back.

6. Do you have a message for Superleague Formula fans?

I would just like to say thank you to all the support that I have had. The championship is growing quickly, so I hope that I can stay in 2011 and put on a great show for you all.

I certainly have unfinished business in Superleague Formula, coming so close to the title the last two seasons. I have one goal for 2011 and that is to be on that top step of the podium at the end of the season.