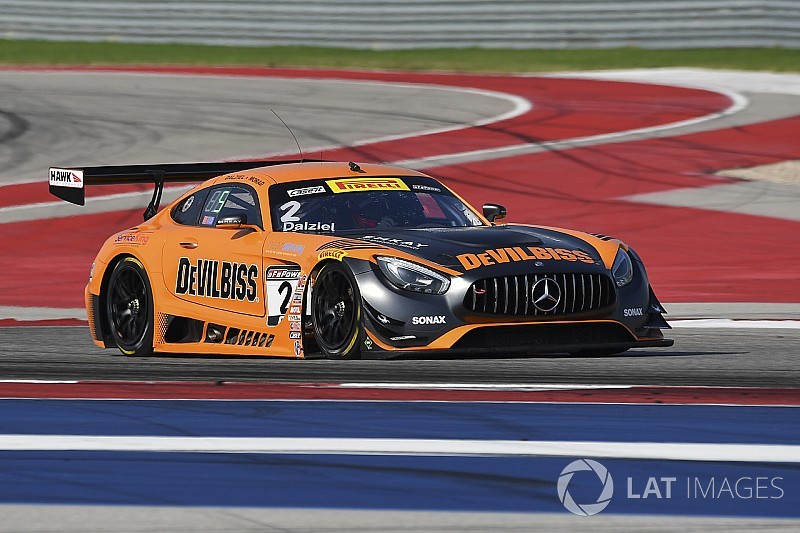 The victory, the second SprintX win for Dalziel/Morad, wasn't enough to overhaul Cadillac Racing’s Michael Cooper and Jordan Taylor in the SprintX points race, despite the #8 ATS-V.R crashing into the Daniel Mancinelli/Niccolo Schiro TR3 Ferrari 488 on the opening lap today and being forced to retire.

Dalziel and Morad miss out on PWC’s inaugural SprintX title 172-175.

Starting fifth on the 32-car grid, Dalziel jumped to third on the opening lap and closed in on the Porsches of leaders Mathieu Jaminet and Bergmeister. At the pit stop, Morad jumped in for Dalziel and vaulted to a two-second advantage on lap 13, and 13 laps later Long came up 1.3sec short at the checkered flag.

“I hate watching races, and I was pretty nervous and pacing around waiting, but Daniel did a great job,” said Dalziel. “I'm happy for Mercedes, a little disappointed with how the overall turned out, but still looking forward to Sonoma to see what else we can do. We made some changes to the car and obviously I was pretty surprised with our pace.”

Added Morad: “Today I just tried to be full attack and go for it whereas Pat had a championship to think of and I knew that. Pat is a very respectful driver and that he would keep it sensible so it was really about keeping the tires under the car. Ryan gave me a perfect car to drive with tons of Pirelli rubber left.”

Pierre Kaffer and Spencer Pumpelly brought Magnus Racing’s Audi R8 home in third, 26sec behind the winning car, but around three seconds ahead of the K-PAX McLaren 650S of Alvaro Parente and Ben Barnicoat, The second K-PAX McLaren of Bryan Sellers and Michael Lewis took fifth.

Am/Am was won by Henrique Cisneros and Peter Ludwig in the MOMO/NGT Motorsports Ferrari 458.