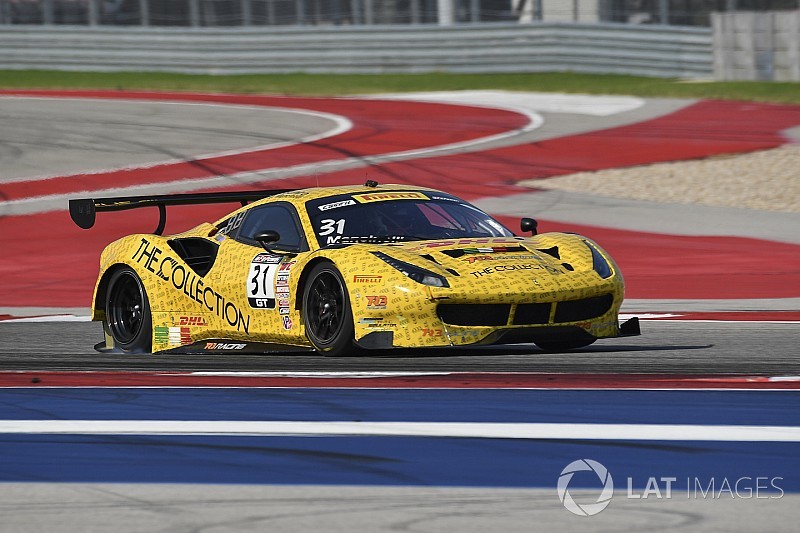 Daniel Mancinelli and Niccolo Schiro drove the TR3 Ferrari 488 to victory ahead of the Johnny O’Connell/Ricky Taylor-driven Cadillac ATS-V.R as Gainsco/Stallings scored a strong third with its Porsche 911.

Ricky Taylor made a great start from the rolling grid to maintain the polesitting #3 Cadillac ATS-V.R’s advantage, with Michael Cooper in the second #8 Cadillac attempting to take Mancinelli’s Ferrari up the inside. But Cooper played fair, didn’t run the Italian driver out of room, and the Ferrari stayed second.

Daniel Morad’s #2 Mercedes AMG GT3 took advantage of a bad start from Alvaro Parente in the #9 K-PAX McLaren passing him up the inside, but when Pat Long tried to also pass in the Wright Motorsports Porsche 911 on the outside, he got turned and dropped to 21st.

At least the field was bunched for Long to begin a recovery drive, as the yellows flew to retrieve Preston Calvert’s Porsche in the Pro/Am category which got damaged in the Turn 1 chain-reaction pile-up.

Behind Parente’s fifth place McLaren at the restart would be Ryan Eversley’s Acura NSX, Jon Fogarty in the Gainsco/Stallings 911, Pierre Kaffer in the Audi R8, Frankie Montecalvo’s Nissan GT-R and Vince Abril in the Bentley Continental.

The restart for the hour-long race came with 42 minutes to go, and then came the news that Morad would receive a drive-through penalty for causing the accident, as would Long for jumping the original start and Abril for crossing the blendline at pitlane exit. Morad may not have received the message, however, as he took the CRP Mercedes past Cooper for third place and within two laps he pulled a 1.6sec lead.

Long had climbed all the way to ninth before pitting for his penalty.

Parente ducked into the pits on Lap 9, promoting Fogarty who’d gotten ahead of Eversley’s Acura. Two laps later, Morad served his penalty, as Cooper handed over his Caddy to Jordan Taylor, and JT emerged still ahead of the #9 McLaren, in which Ben Barnicoat had taken over from Parente.

Johnny O’Connell and Niccolo Schiro took over from R. Taylor and Mancinelli on Lap 13, with the Cadillac remaining ahead, as CRP made its regular stop for the #2 Benz, with Ryan Dalziel taking over from Morad.

Schiro took the Ferrari past O’Connell’s Cadillac on Lap 14 and within a lap and half, the Italian’s lead was two seconds.

Since a strong pitstop taking over from Fogarty, and by avoiding errors on track, Wolf Henzler had taken the #99 Gainsco McLaren into fourth ahead of Barnicoat, and only 1.9sec behind the Cooper/J.Taylor Cadillac.  Even more notable progress was being made by the #58 Porsche, with Long and Jorg Bergmeister overcoming its two pitstops to climb into 10th.

Into the final 10mins, J.Taylor was having to defend heavily from Henzler and Barnicoat was coming into the fray as the Cadillac started backing up.

But then everyone got backed up: Wright’s other car, driven by Jan Heylen, blew its engine on the pit straight and out came the full-course caution.

Schiro was thankful to have two lapped cars between himself and O’Connell, while Taylor, Henzler, Dalziel, Peter Kox in the #93 Acura, Bergmeister, Spencer Pumpelly’s Audi and Tom Dyer in the Eversley #43 Acura was how they’d restart – with just one lap to go at the green.

Henzler got Taylor on the restart, and Barnicoat followed through to demote the #8 Caddy to fifth. Henzler didn’t have quite enough to grab second from O’Connell, but Dalziel did muscle Taylor aside through the final corner to claim fifth.