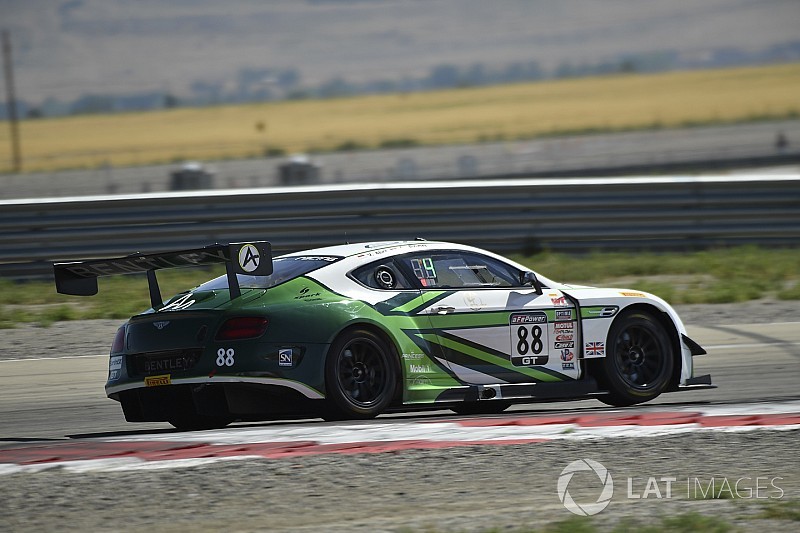 Austin, Texas. – Bentley Team Absolute is set to do battle in the final PIrelli World Challenge SprintX Championship rounds this weekend at Circuit of The Americas with Vince Abril and Adderly Fong looking to finish the SprintX season on a high note.

Abril and Fong had scored points in every SprintX round of 2017 up until the Sunday race at the Utah Motorsports Campus where both drivers suffered contact.

The duo have a pair of fourth place finishes at Canadian Tire Motorsport Park and Lime Rock Park this year and will now be looking to take the No.88 Bentley Continental GT3 to the podium in the three races scheduled for this weekend.

Three of the one-hour / two-driver SprintX races will be run this weekend, with Friday night's event replacing the washed out Sunday round from Canada earlier this year.
Fong is also looking to return to the podium after his victory and second place finishes at the Road America round in June.

Bentley Team Absolute, along with all the other teams in Pirelli World Challenge, are also throwing their support behind the Red Cross appeal to support victims of Hurricane Harvey which inflicted massive damage in Houston a mere 165 miles away from the circuit.

This weekend’s Circuit of The Americas races will be streamed live on MotorTrend on Demand and the Pirelli World Challenge website:

“I had a look at COTA from Formula 1 and it looks like it can suit the Bentley Continental GT3 so hopefully we can hit the ground running and have a good race.

“The track looks nice with fast flowing corners at the beginning, the long straight in the middle and a tight section in the end.

“We’ll see where we end up in practice and then try to draw a conclusion for the race. It’s all looking good but we need to make sure we have everything going our way and then we’ll be up there fighting hard.

“I’ve really enjoyed working with Adderly and Absolute. We feel like we have a good shot if everything goes to plan, would love to end the year on a high note!"

“Most importantly, I hope that everyone who was affected by the hurricane is now safe and with their loved ones. Prayers go out to them.

“For COTA I think we’ll have an interesting weekend. I made my debut there for the Pirelli World Challenge last year but had a challenging weekend.

“However, it will be interesting for me to see what I have learned over the past two years racing here in America with the Bentley Continental GT3.

“We entered the last round of SprintX in Utah, fourth in the championship standings, but due to a rough weekend we dropped to ninth.

“With a triple header this weekend, we have our sights set on clawing our way back into the top three overall.”

Pirelli World Challenge Statement on racing this week at COTA