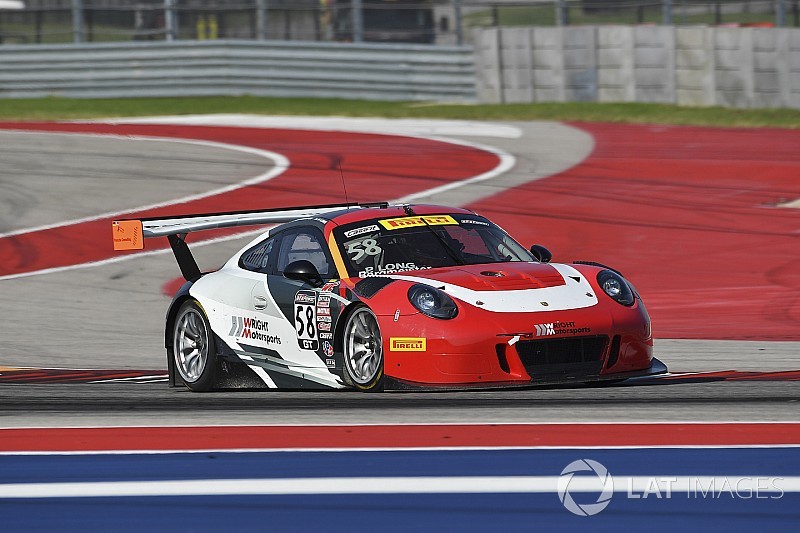 Jorg Bergmeister and Patrick Long prevailed in the make-up race for the Pirelli World Challenge SprintX series at the Circuit of The Americas.

Bergmeister snatched the top spot away from Jeroen Bleekemolen on the opening lap with a move into Turn 1 and he never looked back. It was dominating performance from the No. 58 Wright Motorsports Porsche 911 GT3-R team. Co-driver Long took over the wheel with 32 minutes remaining, maintaing the team's advantage at the front for the remainder of the race.

At the checkered flag, Long held a 3.2-second lead over the No. 31 TR3 Racing Ferrari 488 GT3 of Daniel Mancinelli and  Niccolo Schiro. The final spot on the podium went to the No. 2 CRP Racing Mercedes-AMG GT3 of Daniel Morad and Ryan Dalziel. Morad was the man at the wheel for the final sting, overtaking Michael Cooper and holding on in the closing laps. The Cadillac teammates rounded out the top five with the No. 8 fourth and the No. 3 fifth.

With Friday's runner-up result, Mancinelli has cut Cooper's championship lead down to 23 points.

James Sofronas and Mathieu Jaminet took the checkered flag in the Pro-Am class for the GMG Racing Porsche effort, despite starting last. They held off the Black Swan Racing Mercedes of Tim Pappas and Jeroen Bleekemolen in a dash to the finish. Michael Schein and Jan Heylen in the No. 16 Wright Motorsports Porsche rounded out the podium.