Buford blows it, then blows past them all 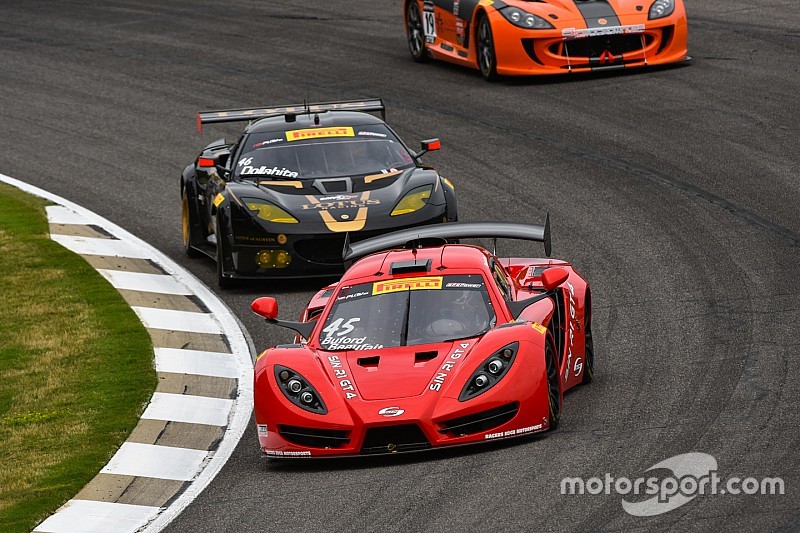 A stall for polesitter Jade Buford only delayed him putting on another display of brilliance as he stormed from the back of Pirelli World Challenge’s GTS field to the front and Victory Lane.

In fact, had only the top six finishers been on track today, they alone would have been enough to produce a thoroughly entertaining race.

With Buford stalling and causing a yellow – although that at least allowed him to catch up with the back of the pack – Aschenbach took the lead from the standing start. Thereafter the Camaro looked like a mother duck followed by her ducklings as the mighty GT car was pursued by the more nimble sports cars – the second Racers Edge SIN of Scott Heckert, Scott Dollahite in SDR Motorsports’ Lotus Evora, and the two Perfomance Motorsports Ginettas of Parker Chase and Harry Gottsacker.

However, on lap 17, having lost a little time in traffic, Aschenbach had to concede the lead to Heckert. At the same time, scything his way from the back, Buford swept past two Mustangs – the Jack Roush Jr. and Ernie Francis Jr. – to move into the top six.

At this stage Dollahite’s Evora still lay 2.5sec behind Aschenbach, with Chase’s Ginetta filling his mirrors, but a new man in fifth – Buford, who had nabbed the place from Gottsacker.

By lap 23, Aschenbach was having to take defensive lines to hold off Dollahite and Chase which spelt the end of his pursuit of leader Heckert, and also helped back the more nimble cars into the gunsight of Buford.

A lap later, Dollahite was into second place, and the start of lap 25, Buford flew off the final two turns to carve past both Chase and Aschenbach in one maneuver that started at the last turn and ended at the first.

Buford’s momentum didn’t stop there and on lap 26, he had completed a SIN 1-2, at the same time as Aschenbach finally conceded fourth to Chase’s Ginetta. That appeared to be that.

And yet astoundingly, within one lap, Heckert appeared to crack under the pressure of seeing his teammate closing in, grabbed too much curb and ran out of lock, spinning his lead away and dropping to fifth, leaving Buford to collect his second win in as many days.

On lap 29, Chase’s Ginetta muscled past Dollahite’s Lotus into second, but by then Buford was 2.5 sec up the road. So Chase did just enough to pull comfortably clear of the Lotus.

When the checkers fell after 32 laps, Buford had won by 4.2sec, Chase was 2.4sec clear of Dollahite, and Aschenbach was a further 7.5sec back.

A chastened Heckert was fifth, after barely holding onto the place from Gottsacker’s Ginetta.