Cadillac Racing's O'Connell and Pilgrim 5th and 6th at Mid-Ohio 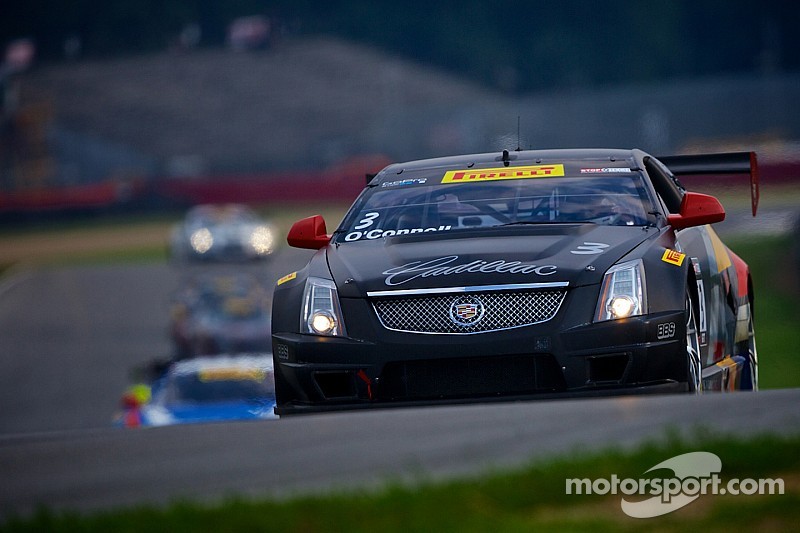 The grid was set by fast lap from yesterday's race. Johnny O'Connell (Flowery Branch, Ga.) started his No. 3 Cadillac CTS.V.R fourth and teammate Andy Pilgrim (Boca Raton, Fla.) was tenth on the grid in his No. 8 Cadillac CTS.V.R. At the start of the 50-minute race O'Connell was able to squeeze his Cadillac by two competitors in front to duel for the overall lead going into the second turn. Like yesterday's race a caution flew after the first lap bunching the field.

On the restart O'Connell was second and teammate Pilgrim was fifth. The next stretch of laps to the next yellow on lap 22 had the FIA GT3 cars getting by the performance balanced Cadillac CTS.V.Rs who were running fourth and sixth. On the last restart, with just seven minutes remaining, O'Connell got a shove from Andrew Palmer and dropped one more position. The Cadillac CTS.V.R duo came across the finish line in fifth and sixth.

"I had another good start," O'Connell said. "I was able to challenge the Porsche for a few hundred yards at the start. The yellows helped me today. With all of the weight we carry I can hang at the front for about two or three laps and that is really working. After that our cars really fall off and they get stronger. I left everything out on the track today.

I felt I ran good races this weekend. We came here knowing that we would have our work cut out for us. When you can have the eighth fastest cars and score a podium and a top five on the weekend that is attributed to the team. I am driving as well as I ever have. I came into this event thinking we would leave not in the championship lead, but we still are leading."

Pilgrim had to pull an evasive maneuver at the start.

"I had to make a split second decision at the start," Pilgrim said. "The Bentley was stalled on the line and I decided to go right with two wheels on the grass, which was the right move as I was able to move up five positons by the second turn. My car was good early, but then it got a little tail happy and the FIA GT3 cars got warmed up. Sadly we are racing as well as we have ever raced, the cars are running as good as they every have and we are racing for fourth and fifth. I had a great race car. The Cadillac Racing guys did a great job this weekend. I am happy with the way I drove, but just not with where I finished. I am hoping they rebalance and help us a little to be more competitive for the last two weekends."