O'Connell (Flowery Branch, Ga.) starting from the third row in sixth based upon his fast lap from yesterday's race. Teammate Pilgrim (Boca Raton, Fla.) started from the fifth row in tenth. When the lights extinguished for the standing start, O'Connell was able to get a good jump off of the line and move up three spots into third by Turn One. A little further back in the field, Pilgrim took advantage of a hesitant Rob Thorne in his McLaren to make up a spot to ninth.

A first lap caution had the Pirelli World Challenge field parading around for six laps before the action restarted. Pilgrim took advantage of the restart and moved up another position to eighth. The remaining 32 minutes had the field pretty much holding station until Pilgrim was able to get a run on Alex Figge in the second McLaren and move into seventh. 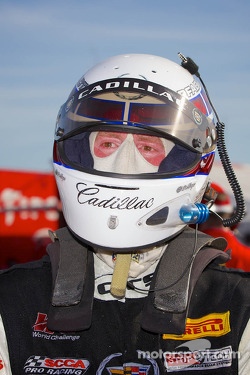 "The time and effort that Cadillac Racing has put into getting these starts paid off again today," O'Connell said. "I was able to go from sixth to third and hold the spot to the end. To get on the podium twice here at Barber, if you would have told me that four days ago, I would have said it would be impossible. The team raised their game and gave me a great handling race car. I had to dig deep to keep Mancuso (Nick, No. 16 Ferrari) behind me while trying to maintain pressure on Andrew Palmer in the Audi.

The leaders were pulling away from me. My tires started going off and that is when Mancuso started to chew on me. So I had to maintain a gap to him and keep pushing, which is fun psychological battle. If it wasn't for getting a good start I think we really had a fifth place car."

Pilgrim, like his teammate, had to make up ground on the start and restart.

"The start was really busy," Pilgrim said. "Thorne in the McLaren got a slow start, so I went left it was getting tight, so I was just able to make up one position. On the restart I was able to get by Tim Bergmeister in his Porsche, but I couldn't make up any track position the Audis toward the end. I got some help in traffic and was able to pass Figge late in the race. The Audi and the rest of the FIA GT3 cars were really fast through 14, 14a, 15 and the exits of Turns Five and Three."

The races from Barber Motorsport Park will be televised on NBC Sports Network, Saturday, May 10 at 4 p.m. ET with a re-air Friday, May 16 at 1 a.m.

The series will travel to Detroit for the Pirelli World Challenge Cadillac Grand Prix of Belle Isle to run May 30 - June 1.