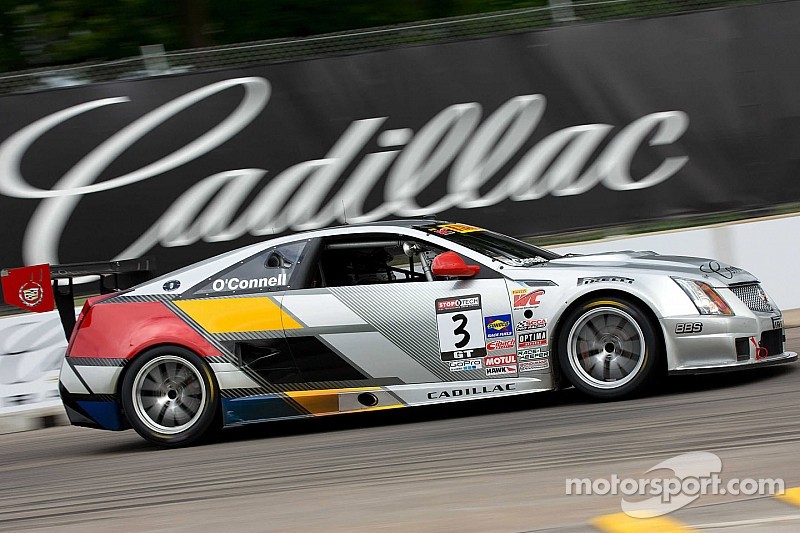 Cadillac Racing drivers Johnny O'Connell (in photo) and Andy Pilgrim will start fifth and ninth respectively for today's race one of two at the Pirelli World Challenge Series Honda Indy Toronto through the streets of Exhibition Place.

The bar for the World Challenge Series has risen yet again. The team's running the new FIA GT3 specification cars are making speed gains by the race. O'Connell (Flowery Branch, Ga.) who has three wins on street courses this year qualified his No. 3 Cadillac CTS.V.R fifth on the grid for tomorrow's 50-minute race based upon a lap of 1:10.253. Teammate Pilgrim (Boca Raton, Fla.) who has three second place finishes in the four street races to date drove his No. 8 CTS.V.R to a ninth place grid position after posting a time of 1:10.538. The duo will have to work hard tomorrow when the 24 car GT field takes the standing start at 11:25 a.m. ET.

"I am always proud of my Cadillac Racing guys," O'Connell said. "I have a car that was on the pole at Long Beach and again in Detroit and led every lap in those races. Here, where we won last year, the best we can do is a fifth place on the grid. I don't know. The car is every bit as good as it was last year and we went a few tenths quicker. I have a strong handling car. There have been a lot of adjustments made for balance of performance this year. I am trying to defend a championship. These Cadillac Racing guys are ultra-competitive. I am going to drive the wheels off of this hot rod tomorrow."

Pilgrim will take the start from row five in the morning.

"The car was pretty good," Pilgrim said. "I had a little too much understeer. I am happy with the way I drove qualifying, I was about three-tenths faster than last year, but this year that is not fast enough. To be at the back of the top ten on the grid is tough. We have a lot of work to do in the race. We have to try and race ourselves forward tomorrow. We have two new faces at the front of the grid in really good cars."