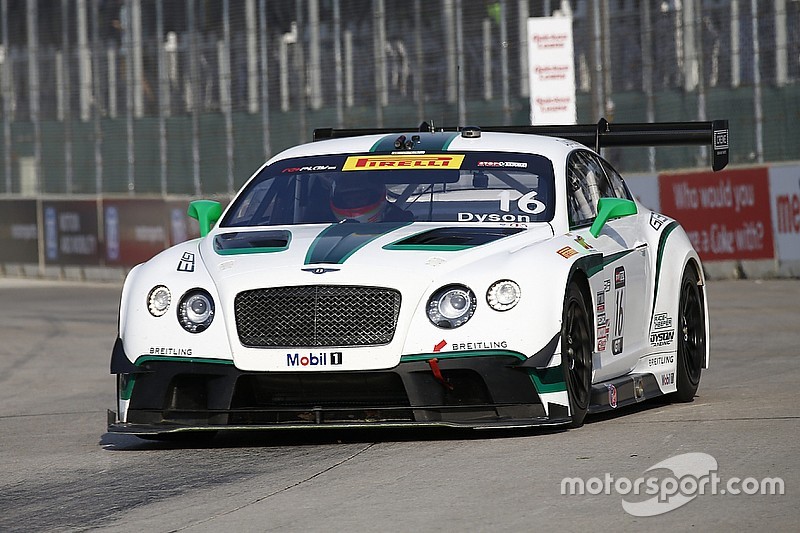 Chris Dyson recovered from a second-turn contretemps on the Belle Isle street course that dropped his Bentley Team Dyson Racing Continental GT3 from its seventh-place grid position to tenth at the end of the first lap and roared back to finish third in Saturday’s Pirelli World Challenge. Dyson was also chosen by series officials as winner of his series-leading, third “Invisible Glass Clean Pass of the Race” award of the season.

“I’m really pleased with our result here,” Dyson said following the traditional champagne-spraying at the conclusion of the podium awards ceremony. “It was a hard race and none of the passes were easy. But everyone I passed raced me clean and fair. It was great to see a street-course race run its full distance without a full-course yellow because it allowed us all to showcase how impressive the racing is in this series. And my car was absolutely brilliant.”

...we’ll be pushing hard in the next couple weeks to ensure we are back at full strength at Road America with two cars.

Dyson explained that because the Continental GT3 is easier on its tires than most of the other cars in the series, long runs favor the Bentley. “That we never had to slow down and line up behind the pace car was a big factor in our result today for two reasons,” Dyson said. “First, we need to keep all the heat we can in the tires and they cool down when you’re cruising around behind the pace car. Second, our races are timed events rather than running for a set number of laps, so coming from 10th-place, I needed every green-flag minute we could get.”

As illustration of Dyson’s first point, his lap times got faster as the race progressed, until he set the second-fastest lap of the race as he passed under the checkered flag, just .002 seconds off the time set by the Ferrari Italia of second-place finisher Olivier Beretta.

Rob Dyson noted that the team had come up with an excellent race setup despite minimal track time prior to the race. “We essentially had one 30-minute practice session to set the car up for the race,” the Bentley Team Dyson Racing CEO said. “Chris did a phenomenal job moving up through the field, but he had great car to work with. I have to give due credit to our engineering team for putting us in a strong position.”

The qualifying session for the fast half of the field was eliminated when a Porsche crashed heavily before the other cars were fully up to speed, so the grid was determined by the championship point standings. Before that, all but a few minutes of the second practice session were lost after Bentley Team Dyson Racing driver Butch Leitzinger crashed. Fortunately, Leitzinger, who had scored a pair of podium finishes earlier in the month in Canada, was uninjured. But his Bentley Continental GT3 was too badly damaged to repair at the track.

“I was following Butch at the time,” said Chris Dyson. “He got his inside wheels just a few inches or so too far on the curbing and the back end stepped out very quickly on acceleration. It was a very small error and he almost caught it – but not quite—and the street course here at Belle Isle is unforgiving. But we have some time now to regroup, and we’ll be pushing hard in the next couple weeks to ensure we are back at full strength at Road America with two cars.”

Based on his lap time in Saturday’s race, Dyson had a front row starting position for Sunday’s race. But seriously heavy rain created what series officials and race organizers determined were unsafe conditions and the race was cancelled. At the close of press, series officials were considering an enhanced points structure to make up for the Belle Isle cancellation when the Pirelli World Challenge visits Road America, on 27-28 June.

Ferrari on the World Challenge Podium in Detroit