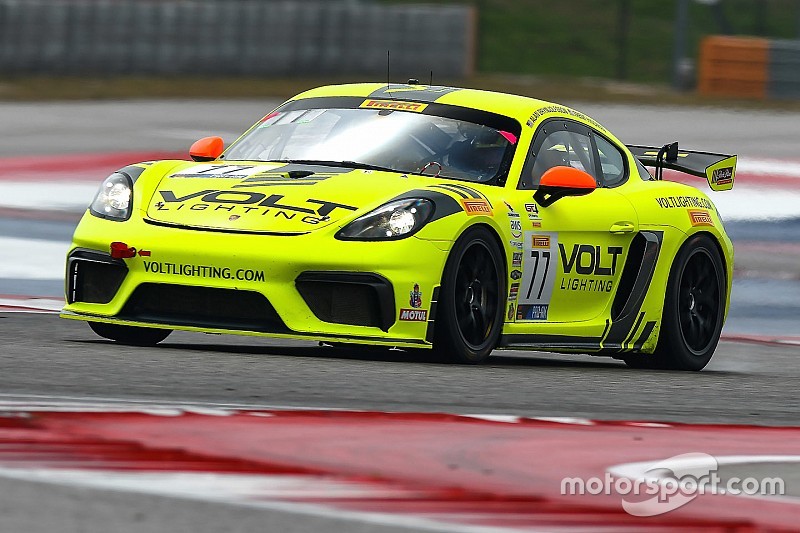 Trent Hindman and Alan Brynjolfsson won round two of the Pirelli GT4 America SprintX at Austin’s Circuit of the Americas, ahead of yesterday’s winners, Matt Travis and Jason Hart, who recovered from a pitstop penalty to finish a close second.

After a wild rolling start in cold and drizzly conditions, Flying Lizard Porsche 718 Cayman CS MR driver Robby Foley hit the front at Turn 1 from third on the grid, sweeping past the NOLASPORT Porsches that were slow away from the front row. Then Hindman’s Park Place Porsche Cayman grabbed the lead out of Turn 11, making the move stick into the following hairpin.

Polesitter Hart dropped to third, but regained second at Turn 1 on lap two. He then attacked Hindman for the lead, shoving him wide in a repeat of his Turn 11 lunge.

A big shunt for Jeff Burton’s Rearden Racing Audi soon brought out the safety car, as he slammed the barrier near the pitlane entrance.

After a delay to clear the debris, Hart led the restart from Hindman and Foley, the latter making a poor restart but holding his position with a bold move at Turn 1.

Hart and Hindman battled hard for the lead, as Alec Udell deposed Foley around the outside at Turn 1 for third in his GMG Audi R8 LMS.

Hindman grabbed the lead from Hart just before half distance, as Udell joined the lead battle.

The leaders pitted together, with Travis just beating Alan Brynjolfsson (who even jumped on the brakes at pit exit!) out of the pits in a switch of position at the front. But Travis/Hart’s stop was too quick, under the minimum pitstop time, while Hindman/Brynjolfsson was near-perfect.

Travis rocketed away out front, opening out an 11sec lead, while Race Control took its time to dish out the drive-through penalty. “We only find out from you,” said Hart to the pit lane reporter when it was finally handed down. “[The stop] was 2.5s faster, so we’ll just have to bury it, see if we can catch them.”

When he rejoined, Travis emerged in fourth, behind second-placed Michael Dinan in the Porsche he’d taken over from Foley, and Matthew Fassnacht/Christian Szymczak (Murillo Racing Mercedes).

Dinan caught Brynjolfsson with five minutes remaining, but the action was all happening behind.

Travis grabbed third from Fassnacht on the final lap and then passed Dinan, who ran wide and fell back to fifth, behind Fassnacht.

Travis got right to Brynjolfsson’s bumper at the final corner, but Brynjolfsson held him off by 0.155s.