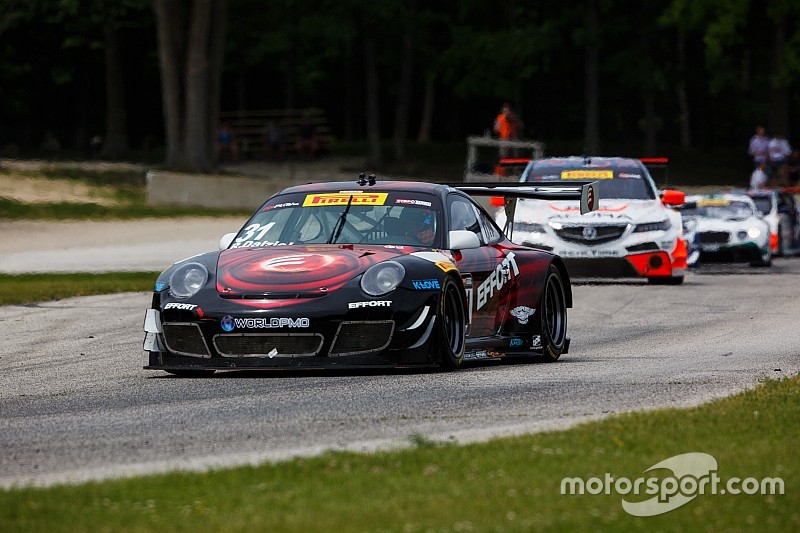 Ryan Dalziel took the GT and over all win from the pole at the Pirelli World Challenge Round 14 race at the Mid-Ohio Sports Car Course, part of the StopTech Mid-Ohio Grand Prix presented by MOMO. It was his first win of the season, but his third straight win at Mid-Ohio.

Dalziel, in the EFFORT Racing Porsche 911 GTR3 R, finished 1.873 seconds ahead of J.D. Davison in the AE Replay Nissan Nismo GT-R GT3. Third was Olivier Beretta in the Ferrari Ontario Ferrari 458 GT3 Italia. Beretta had been the second fastest qualifier, behind Dalziel.

In GTC, Alex Udell took the class victory in his Amsource Capital Porsche 911 GT3 Cup entry. He was 29th overall in the 36-car field.

It was a tough day for some of the usual frontrunners: Mike Skeen was 18th overall in his Audi, Butch Leitzinger was 22nd in his Bentley, Robert Thorne was 25th in his McLaren, and Andy Pilgrim was 27th of 28 GT cars in his Cadillac. His Cadillac teammate, Johnny O’Connell, was fourth.

Dalziel goes two for two in World Challenge at Mid-Ohio