Dalziel goes two for two in World Challenge at Mid-Ohio 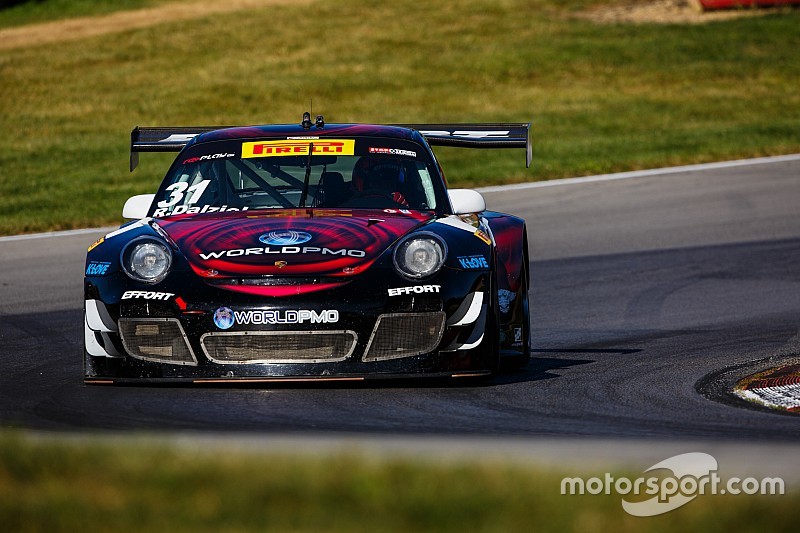 Ryan Dalziel came to the Mid-Ohio Sports Car Course with no wins this season in the Pirelli World Challenge series, but he leaves Sunday afternoon with a sweep of the weekend, taking the pole, the win in Saturday’s race, and a win in today’s Round 15 at the StopTech Mid-Ohio Grand Prix presented by MOMO. It was his fourth straight win at Mid-Ohio.

Dalziel, in the EFFORT Racing Porsche 911 GT3 R, finished .875 seconds ahead of J.D. Davison in the AE Replay Nissan Nismo GT-R GT3, who was also second on Saturday. Third was a surprising run by Bryan Heitkotter in the Nissan Academy Nissan GT-R GT3 – Heitkotter was competing in the GTA class, so he won in that division.

Fourth was Olivier Beretta in the Ferrari Ontario Ferrari 458 GT3 Italia. Beretta had been the second fastest qualifier, behind Dalziel. Dalziel’s stellar performance at Mid-Ohio gives him the points lead over Beretta.

Dalziel had one scary moment when he made contact with Sloan Urry as he was lapping Urry’s Porsche, and that allowed Davison to close up but he could not make the pass. Then a caution flag for a spin into the gravel by Preston Calvert allowed Davison one more shot at Dalziel, but the Porsche driver would not be denied.

In the spec GT Cup class, which uses Porsche 911 GT3 Cup cars, Colin Thompson in the Kelly Moss car held off Alec Udell in the Amsource Capital entry, finishing 23rd and 24th overall respectively.
Next up for the series: Miller Motorsport Park in Utah, August 21-23.