Drissi picks up a pair of top-ten finishes in St. Petersburg

Tomy Drissi returned to the east coast and Florida this week for the Honda Grand Prix of St. Petersburg competing in rounds one and two of the Pirelli World Challenge GT class. Tomy finished both races in the top 10 driving the No. 4 'The Internship' Corvette for LG Motorsports.

The Pirelli World Challenge at the Honda Grand Prix of St. Petersburg IZOD IndyCar Round One ran Saturday, March 23, while Round Two ran Sunday, March 24. The race can be seen on NBC Sports, Sunday, April 7th at 12:30PM eastern. Note, time and date subject to change. 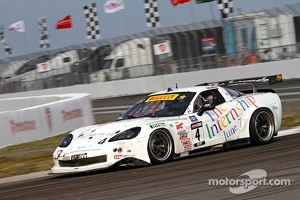 "We had a tough weekend," noted Tomy. "In the first round we managed to hold our own and with the tech problems experienced by the winning Porsche, we finished 8th.

"In the second round, I got a good start and in the first five laps moved up from 11th to 6th with some good driving and a bit of luck. But then as the race settled in, the faster cars caught us and I had nothing for them. They were just that strong.

"Late in the race I tagged one of the Audis. Unfortunate and my fault. I apologized to the driver after the race … I was just trying to keep up with cars that clearly had a performance advantage.

"It was like we brought a knife to a gun fight. We will have to do something before Long Beach or we are cooked!

"I think the SCCA will look into the performance balance of things. The Corvette is going to need some help to be competitive. The Audi has way too much and so does the Volvo. As strong as the Cadillacs were, they really didn't have much for the Audi or Volvos."

At the completion of the 2012 season, WC Vision announce the approval of the Audi R8 LMS, Mercedes SLS, and BMW Z4 for competition in the Pirelli World Challenge GT class for 2013. Each of the approved models was subject to WC's performance balance and aero specs. Pirelli World Challenge fans will now experience the most diverse racing on the planet with the GT class having representation from 10 different brands.

Tomy's No. 4 Corvette featured the upcoming movie, The Internship, which will open in theaters June 7th starring Vince Vaughn and Owen Wilson. In the movie, Billy (Vince Vaughn) and Nick (Owen Wilson) are salesmen whose careers have been torpedoed by the digital world. Trying to prove they are not obsolete, they defy the odds by talking their way into a coveted internship at Google, along with a battalion of brilliant college students. But, gaining entrance to this utopia is only half the battle. Now they must compete with a group of the nation’s most elite, tech-savvy geniuses to prove that necessity really is the mother of re-invention.

This was the fourth straight year for the Pirelli World Challenge kicking of its race season in Florida with a doubleheader weekend. The series runs as part of the Honda Grand Prix of St. Petersburg IZOD IndyCar event. Televised coverage of Rounds 1 and 2 of the 2013 Pirelli World Challenge from St. Petersburg is scheduled to air Sunday, April 7 at 12:30 p.m. ET on the NBC Sports Network. Race fans can always tune in online for live race coverage at www.world-challengetv.com

With a successful weekend in the books and for the eighth-straight year, the Pirelli World Challenge returns to the Toyota Grand Prix of Long Beach and the ‘Roar by the Shore’, April 19-21. Only the GT and GTS fields will compete on the 11-turn, 1.968-mile temporary street course.

Drissi apologizes following ban: "I let my emotions get the better of me"