Ende looks for rebound at Mid-Ohio after rough Toronto weekend

Like a bad first date, Ende looks to forget about Toronto when he visits Mid-Ohio this weekend

August 1, 2013 (Los Angeles, Calif.) -Duncan Ende, driver of the no. 24 STANDD / Merchant Services Audi R8 LMS, is looking for a rebound of sorts at this weekend's Pirelli World Challenge doubleheader at the Mid-Ohio Sports Car Course in Lexington, Ohio. 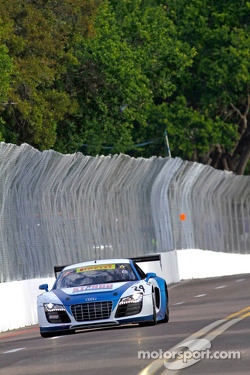 Struggling through the World Challenge weekend three weeks ago on the temporary circuit at Exhibition Place in Toronto, Ontario, Ende would finish in sixth place but never quite came to grips with the bumpy circuit in his first real visit to the circuit.

"Toronto was like a bad first date," said Ende, who it must be said, is married. "I had such high hopes, but in reality, it was completely forgettable. I had actually driven there once before in ChampCar Atlantic, but we had a big crash in practice and didn't make the race. Perhaps, Toronto isn't my kind of circuit which is too bad because it produces some really great racing. However, Mid-Ohio has been much kinder to me over the years - in fact, I won an American Le Mans Series race there in a monsoon two years ago with my friend Spencer Pumpelly."

Mid-Ohio, however, may not be a circuit that suits the strengths of Ende's Audi R8 when he compares it to the Cadillac CTS-V.R's and the Volvo S60s that he has battled with throughout the season. However, the Audi's strength - its ability to conserve tires better than the others - will be the ticket if the race stays green for long periods of time.

"Mid-Ohio is definitely hard to pass on, but is also a very demanding circuit," said Ende. "So while we may not be able to be quickest from the standing starts and it takes a few laps for the Audi to get heat in its tires, if the race goes green for a long time we'll be looking good while everyone else will be starting to run out of tires. Once we are able to build heat, the Audis will be extremely quick around Mid-Ohio. If we can make it through Toronto with no yellow flags, I'm hoping we can do the same at Mid-Ohio."

While Toronto was the racing equivalent to a first date that ends with the comment 'It was so nice to meet you', it did have the benefit of helping Ende move up to seventh in the GT class championship. Ende now sits seventh in the standings, with 727 points.

The first race of the Mid-Ohio World Challenge GT/GTS doubleheader will be Saturday, August 3 at 11:40 AM ET, with the second on Sunday, August 4 at 1:35 PM ET. Both races will be streamed live at world-challengetv.com. A television broadcast from Mid-Ohio will air on Sunday, August 18th at 2:00 PM ET.

Ken Stout Racing looking ahead to races at Mid-Ohio