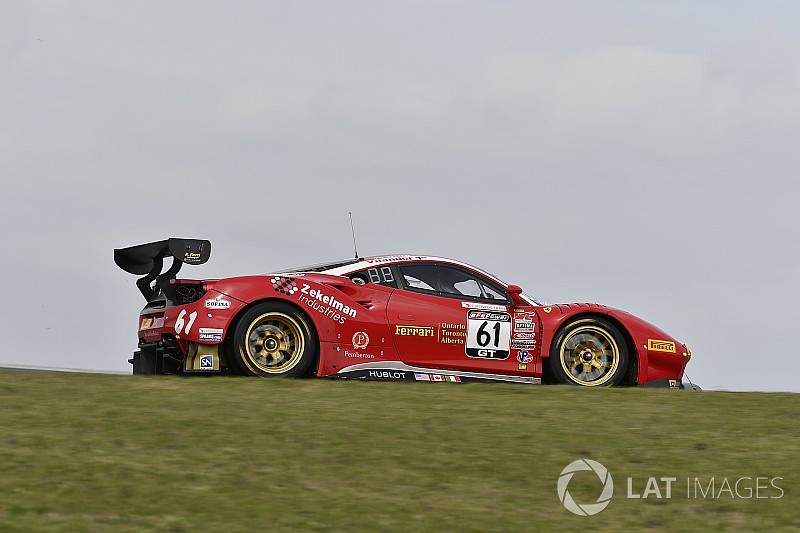 Molina, on his series debut, drove away from the opposition for a 5.5s victory over the CRP Mercedes of Daniel Morad/Fabian Schiller. It was the team’s first win since 2015, and Molina said afterwards: “Really thankful for the opportunity.

“Alongside Toni, it’s a really nice feeling to score a victory here. The pitstop was a bit tight, but I pushed on the out lap and it was all about the small details.”

From the start, polesitter Mike Skeen made a strong getaway in his Mercedes-AMG GT3 as Vilander’s Ferrari 488 deposed Alvaro Parente’s K-PAX Bentley Continental for second at the first corner.

Further around the opening lap, Alec Udell’s Porsche 911 and Morad’s Mercedes AMG passed the Bentley, with Morad then moving into third at Turn 1.

Skeen stretched a 2s lead over Vilander on his opening stint. Behind Parente, running in sixth was Scott Hargrove working hard to hold off fellow Porsche driver Michael Christensen, who in turn was having to watch his mirrors for Rodrigo Baptista’s Bentley and TruSpeed’s Audi R8, at this point driven by Parker Chase.

The race changed during the pitstop sequence, as Molina replaced Vilander and took control of the race by streaking away to victory. Scott Heckert, who took over from erstwhile leader Skeen, got embroiled in a battle with Schiller, who passed him – but stewards judged the pass to have contravened track limits.

Schiller handed the position back for the briefest of moments at Turn 1, diving back ahead at Turn 2 to ensure his runner-up spot.

Hargrove and Wolf Henzler finished fourth in the Phaff Motorsports Porsche, ahead of the K-PAX Bentleys of Rodrigo Baptista/Maxime Soulet and Parente/Andy Soucek – the latter clashing with Mathieu Jaminet, who had just taken over from Udell before they collided at the first corner.

The TruSpeed Audi of Ryan Dalziel, who took over from Chase, was hit by Jeff Segal on the final lap, which gave second in Pro-Am to Segal and Wei Lui in the TR3 Racing Ferrari. Segal apologized for it afterwards.