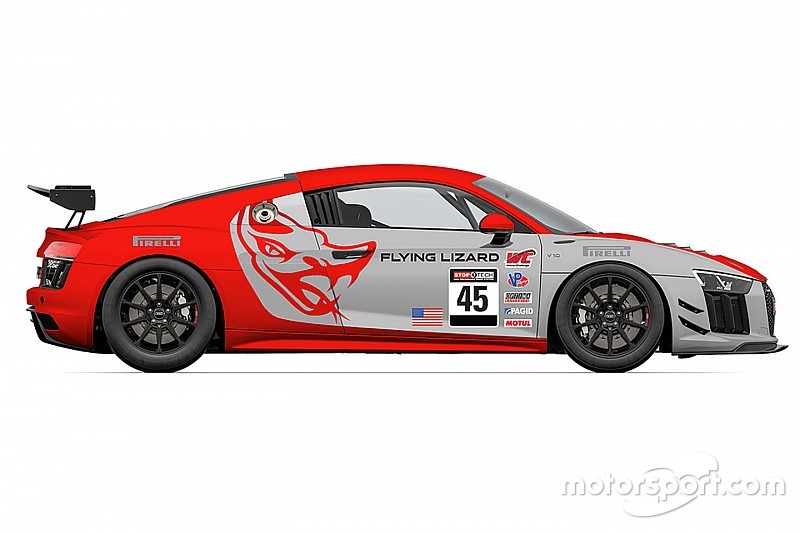 Flying Lizard Motorsports will return to the Pirelli World Challenge in 2018 for its second season in the GTS class but is switching from Porsche Caymans to Audi R8 LMS GT4s.

However, FLM's two R8s will be driven by Mike Hedlund and Adam Merzon, with Ryan Eversley joining Merzon for the five SprintX race weekends. Hedlund, as a bronze rated driver, will be eligible to run the two-driver formatted SprintX Races without a co-driver.

"I'm looking forward to the potential that racing with Audi Sport customer racing will provide for us," said FLM’s program manager Darren Law. "With so many new cars coming in to GT4 this year, we had to take a hard look at everyone and evaluate the performance and program of each of them to provide our team the best opportunity for success.

“Audi always delivers an extremely competitive car and they are focused on the performance. We were very impressed after a review of the new R8 LMS GT4 and having previously had a relationship with Audi Sport customer Racing, this was an obvious choice."

Flying Lizard Motorsports first raced the Audi R8 LMS in IMSA’s GT Daytona class, finishing second at the team's first race of the season, the Rolex 24 at Daytona. The California squad has a winning history with the Audi R8 LMS, clinching overall victory at NASA’s 25 Hours of Thunderhill in 2015, 2016, and 2017. The team will retain the same crew from 2017, bringing with them existing knowledge of and experience with the Audi R8 LMS.

"Our relationship with Flying Lizard Motorsports was launched in 2014 and they have been extremely successful with Audi since the beginning," said Tristan Herbert, Audi’s senior manager of motorsport and customer racing. "Most recently, they won the 25 Hours of Thunderhill for the third year in a row. This team knows the Audi brand and how to win. We are delighted to have them represent Audi Sport customer racing with a two-car Audi R8 LMS GT4 program."

The team will take delivery of its new Audis in February ahead of the debut in St. Petersburg in mid-March.