GMG will continue their quest for a GT category championship by presenting a four-car lineup during this weekend’s event.

SANTA ANA, Calif. - Heading to only the second permanent road course of the 2014 Pirelli World Challenge Championship, Global Motorsports Group (GMG) will continue their quest for a GT category championship by presenting a four-car lineup during this weekend’s event at Road America.

“It will be great to return to a permanent road course,” stated team owner and driver James Sofronas. “The last time we were at a track like this was in Barber two months ago, and the high speeds definitely show a lot of potential for the GT3 machines.”

Racing for the first time at the historic Road America venue, a four-mile, 14-turn circuit located in scenic Elkhart Lake, Wisconsin, series standout Andrew Palmer will head into the weekend third in the championship and the top-ranked Audi R8 LMS ultra driver. Following a podium sweep at the most recent doubleheader on the streets of Detroit, the 19-year-old will look to carry his momentum into his first visit to the Wisconsin track. During the last race on a permanent road course, at Barber Motorsports Park, Palmer took a spectacular last-lap victory over Anthony Lazzaro in the No. 61 Ferrari 458 Italia. 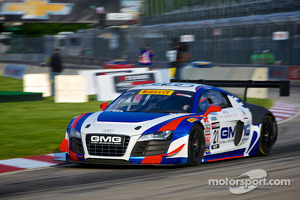 “Road America is a truly historic venue to compete on,” stated Palmer, driving the No. 21 Spyder / The Thermal Club Audi R8 LMS ultra. “It looks like a very fast circuit that will require a lot of down force and a lot of high-end speed. I’m looking forward to seeing how we measure up, but I’m confident that between GMG and Audi, we’ll have a strong package if we can manage our race properly. We definitely want to maximize our points.”

Returning to Road America with the series for the first time since 2009, James Sofronas will look to continue his form on the track in the No. 14 Mobil 1 / The Thermal Club / Spyder machine with expectations of much higher lap times. When the series last took to the track five years ago, the Villa Park, California resident took pole position, albeit with a different marque and a different tire. Additionally, Elkhart Lake also marks the site of James’ first-ever professional car race in 1994.

“I’m expecting to see lap times fall quite a bit from what we did in 2009,” stated Sofronas. “With all of the GT3 cars out here, and the quality of tire that Pirelli has brought, it will make for some really quick times and I think the fans will be getting a great show. It’s always very special to come to Road America, I can’t believe it’s been 20 years since my first pro race that I ran with my brother! The guys have done a great job getting us ready for this weekend and I’d really like to fight for a podium.”

Returning in the GT-A category will be driver Bret Curtis in the No. 32 Spectra Resources / United Steel Supply / Valspar Audi R8 LMS ultra. Following a strong podium performance at the most recent round in Detroit, the Texas resident looks forward to the familiar surroundings of a traditional road course.

“Road America is one of the country’s greatest tracks so it’s always great to come out here and run,” stated Curtis. “We had a good run in Detroit with our first podium and hopefully the strength of the Audi can continue that here. Everyone on the team has done a great job of getting us ready so I’m looking forward to it.”

Finally, Bill Ziegler and his No. 95 Swisher Racing machine will arrive to the track in search of maximizing the strengths of his Audi on the demanding circuit.

“I think we should do really well here,” stated Ziegler. “This is probably the longest course we’ll run at all year so we won’t be as bogged down in traffic, which will make a big difference for me. The team has done a great job and I think this could really be a good weekend.”

Joining forces with the NASCAR Nationwide Series, the Pirelli World Challenge will once again continue it’s doubleheader format during this weekend’s event. Race One will take place on Friday, June 20, at 3:15PM CST with Race Two taking place the next morning at 9:10AM. Live coverage can be found on world-challengetv.com, with a NBC Sports Network television replay on Friday, July 4, at 6:30PM.

Palmer closes Monterey weekend with domination in the second race