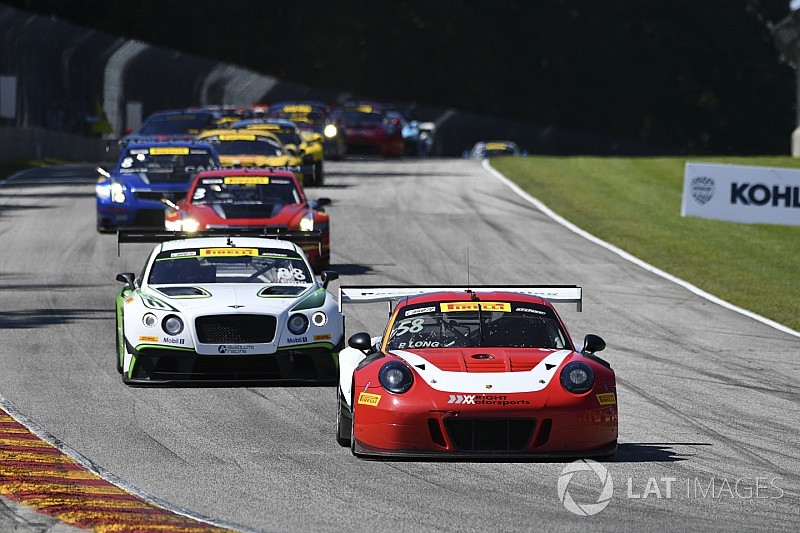 Lexington, Ohio – For Patrick Long and John Wright, the 2017 Pirelli World Challenge championship run has become a solid and productive campaign by leading the current GT point standings. But it wasn’t that easy for them last year.

Long, the 35-year-old professional driver from Manhattan Beach, Calif., has won sports car races around the world including two wins at the 24 Hours of Le Mans. And he captured the Pirelli World Challenge GT point title in 2011.

Patrick returned to PWC last year with a win in the season opener, but that was with a different team and that operation shut down in May leaving Long without a ride. Wright and his Ohio-based Wright Motorsports team recruited Patrick from the sidelines and made a valiant effort to win the 2016 GT championship. In the final race at Mazda Raceway Laguna Seca, Long was forced off the track on the last lap and lost the coveted GT crown.

We didn’t have a good Mid-Ohio weekend last year with Patrick,

“I owe a lot to John, Wright Motorsports, Porsche and my teammate Michael Schein for bringing me into the fold in the middle of last year,” said Long, who comes to Mid-Ohio Sports Car Course next week for another PWC GT doubleheader as part of the Honda Indy 200 weekend. “They gave me a great Porsche GT3 R to fight for the title last year. And we came up close. This year, we set our sights on the championship.”

Long and Wright’s relationship dates back several years when Patrick won the GT championship for TruSpeed Motorsports with Wright has his racing engineer. Since then, their bond has grown.

“Last year was difficult with Patrick coming to the team mid-season,” said Wright, whose Porsche team has its headquarters in Batavia, Ohio. “We were catching up as fast as possible. We never had a real team test day with Patrick as he had other racing commitments worldwide. This year, we feel more confident with the driver and the team.”

That confidence has taken Long to three GT wins already and the point lead in both the GT Sprint and GT Overall (Sprint and SprintX divisions). Patrick leads defending GT champion Alvaro Parente of Portugal by 17 points in the GT Sprint series and he is tied with Cadillac’s Michael Cooper in the GT Overall standings.

Now, Long and the Wright Motorsports crew come to the closest track to their home in the legendary Mid-Ohio 2.258-mile, 13-turn natural-terrain circuit in Lexington, Ohio. Both Long and Wright have won races at Mid-Ohio previously and look for another spot on the top of the winner’s podium on July 28-30.

“I first went to Mid-Ohio in 1988 and, in 1992, I came to the track as a mechanic for the first time,” said Wright. “So, this year will be 25 years of racing there for me. And I would love to put Patrick and Michael (GTA class) in the winner’s circle at Mid-Ohio. We are coming off a win for Patrick at Road America and we would like to keep up that momentum. But it won’t be easy with the PWC GT field.”

Wright admits they were off-pace last year at Mid-Ohio with Long’s Porsche as Parente and Cooper won the two 50-minute GT Sprint features. Long placed ninth and 15th in the two Mid-Ohio races in 2016.

“We didn’t have a good Mid-Ohio weekend last year with Patrick,” said Wright. “We had to upgrade the race car for the reminder of the season. And we came back to battle for the championship. At times, I didn’t feel Patrick had the car under him to fight for the title. This year, we felt completely different when he entered the 2017 season. The team has been jelling and working well together. We have a more relaxed atmosphere this year too. We have five PWC wins in the last two years.”

With Wright and engineer Bob Viglione leading the charge, Long has been in contention in nearly every GT Sprint (50 minutes) and GT SprintX (60 minutes) race in 2017. The exciting Road America win last month was a perfect example for Wright Motorsports.

“We came in a close second (to Adderly Fong in the Bentley) in the first Road America race,” said Long. “In the second race there, I had to make a strong start in turn one to grab the lead and Adderly hung with me the entire event. It was a dogfight to the checkered flag. It was ten-tenths driving and a typical Pirelli World Challenge race. A complete sprint from start to finish. It was very gratifying for myself and the Wright Motorsports team. Just a superb team effort.”

However, things haven’t slowed down for Wright Motorsports since the Road America weekend.

“Mike’s (Schein) car was hurt pretty badly in a crash at Road America and we still have work to finish before Mid-Ohio,” said Wright. “Plus, we know we were not fast with Pat’s car and we need to study a variety of things to make the car better. The GT class is tough with the top teams like Cadillac, K-PAX (McLaren), Acura, Audi, Mercedes, Bentley and others. We want to continue to put Pat in a position to win and Mid-Ohio is a challenging track too. It will not be easy.”

But the 2017 season for Long, Wright and his racing organization has already seemed easier than 2016.

“We approached 2017 much differently from last year and things are paying off now,” said Wright. “But the season is long from over. A good performance at Mid-Ohio would be big for the team. Plus, it’s in our home state. An Ohio-based squad winning at Mid-Ohio would be a thrill.”