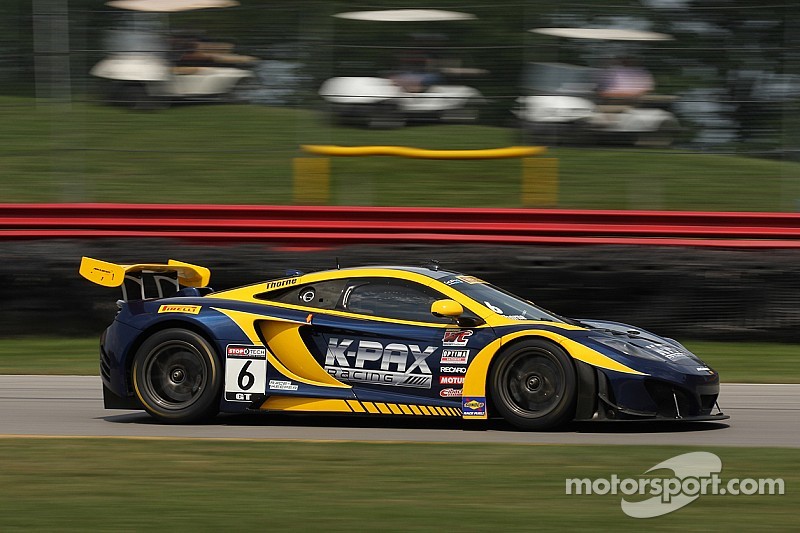 "This is going to be an exciting season," said Program Manager Darren Law. "Pirelli World Challenge has grown so much the past few years and really has put together an impressive championship. We have a lot of confidence in our two drivers this season. Robert Thorne is back and is an up and coming new talent that showed a lot of speed last year. He finished the 2014 season with a strong drive for the win at Miller Motorsports Park. Then add McLaren factory GT driver driver Kevin Estre, who is really quick and has a lot of raw talent. I feel like we will be one of the teams in contention all season long."

The new car is so agile and a lot of fun to drive. In addition to the new car, we have this new team, which is a combination of two incredibly strong efforts.

Robert Thorne started his career in karting at 8 years old, earned his competitive racing license by age 15, and then advanced to Formula BMW USA the following year in 2007. By 2008, Thorne made the transition to sports cars, adding the likes of the Sports Car Club of America and GRAND-AM Road Racing to his resume. 2015 will mark the second PWC season with K-PAX Racing for Thorne. The 24 year old American finished out the 2014 race season on the top step of the podium, clinching a dominating win at Miller Motorsports Park.

This January, Thorne kicked off the new season of racing at the Rolex 24 at Daytona with Flying Lizard Motorsports, securing a solid top ten finish after issues in the first hour forced the team to rejoin in last place. Thorne will return to pilot the #6 McLaren 650S GT3.

At age 10, Kevin Estre also began his racing career in karting, clinching several championships in the few years to follow. From there, he advanced to Formula Renault 2.0 then went on to win the French Porsche Carrera Cup Championship in 2011. In 2013, Estre's success continued, and the Frenchman was crowned Porsche Carrera Cup Germany Champion. His efforts paid off in 2014, when McLaren GT named Estre as their newest Factory GT driver. That season Estre earned two podiums in the Blancpain GT Series while also competing in the United SportsCar Championship and VLN Endurance Championship Nürburgring. Estre will be in command of the #9 McLaren 650S GT3.

Both drivers and the Sonoma, California based team participated in a two day private test at Sebring International Raceway to test the two new McLaren 650S GT3s, upgrading from last year's MP-12C GT3s. This test marked the first outing since K-PAX Racing merged with Flying Lizard Motorsports for a united effort in Pirelli World Challenge.

"I have to say, I am seriously impressed with the new McLaren 650S GT3," said Program Manager Darren Law. "It is honesty one of the most impressive GT cars I have had a chance to be involved with. We spent last weekend at Sebring, rolled off the truck, and ran for two solid days without issue. It was great for all of us because we had the chance to not only work with the McLaren engineers but also both drivers. We were able to run through setup changes and log a lot of data. We are working hard to be ready for the first round and adding an additional Circuit of the Americas test will be beneficial. I am really looking forward to this upcoming season."

The 2015 Pirelli World Challenge begins March 6-8 at Circuit of the Americas in Austin, Texas.

Robert Thorne: "It felt great to get back on track in a McLaren and test the new 650S GT3. The new car is so agile and a lot of fun to drive. In addition to the new car, we have this new team, which is a combination of two incredibly strong efforts. My engineer, Will Moody and I were able to get to know the Flying Lizard Motorsports guys very well at Daytona, so it was nice to come into this test and already have that familiarity. Both K-PAX Racing and Flying Lizard Motorsports are so experienced in sports car racing and bring a perfect blend of knowledge to the table."

Kevin Estre: "The test went really well, we did quite a lot of laps, and Sebring is a really demanding track so it was important to drive there and get a feel from the car on this kind of track. The biggest gain was to get mileage on the car for the mechanics, engineers and drivers.

The strengths of the 650S are the aerodynamics and the agility. To know how the car reacts on a bumpy track is important because it's going to be a key in this championship with some street circuits. K-PAX and Flying Lizard Motorsport are looking really professional.

I felt a lot of experience in the mechanics and engineers, and I'm really glad to be part of this awesome team. I'm really looking forward to start the season. The competition will be hard with a lot of good teams and good drivers. I love sprint races so I think this championship is going to suit me. The racetracks are really cool and we have a great team and a super-fast good looking car. I'm really excited!"